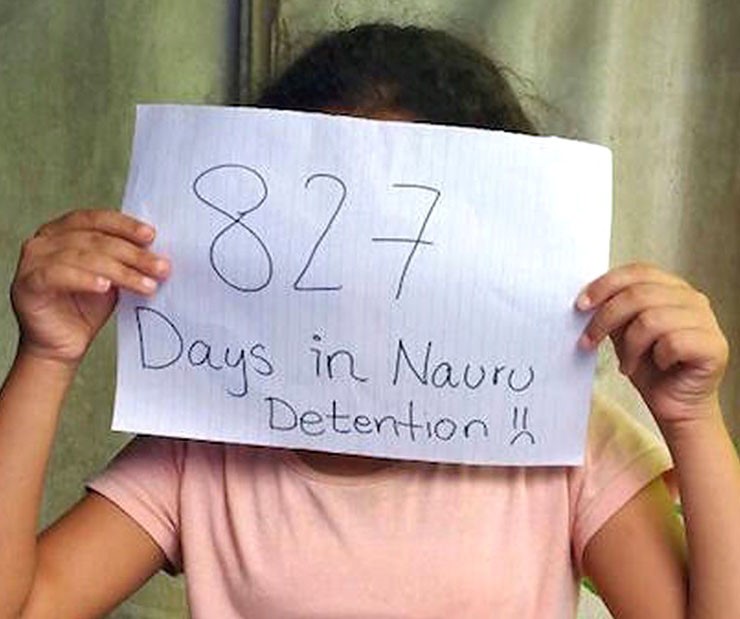 Australia’s immigration detention policies and practices and those of its neighbouring countries will be in the spotlight today in Geneva, at the launch of the Global Detention Project’s new website and online database.

Australia is currently holding more than 3,000 people in immigration detention facilities. Slightly fewer than half of these people are being held offshore, either on Manus Island in Papua New Guinea, or on the island of Nauru. Most of them are from developing countries, including Iran, Sri Lanka, Vietnam, China, and Afghanistan. The group on Nauru includes 50 children.

The launch will be held at the UN’s Geneva headquarters during the 32nd Regular Session of the UN Human Rights Council. The case of Australia and its neighbours has been selected, not at random, to demonstrate the capabilities of the database.

I recently spoke with Michael Flynn, the Executive Director of the Global Detention Project. We talked about the Project’s origins and aims, Australia’s immigration detention policies in a global context, and the role of international organisations in this area. Our conversation is available as a Devpolicy podcast here and you can read the full transcript here [pdf]. Below are some highlights.

The Global Detention Project owes its existence to the murky offshore detention practices of the United States government in Central America in the post–9/11 period. Michael was at that time an investigative journalist, and his interest was piqued:

In the case of Guatemala, they were using dilapidated hotels to detain Indians who had been apprehended in Mexico. The United States paid for the detention. And the obvious question was, ‘why doesn’t anybody know about this?’ There was an article in The Miami Herald, page 20, one paragraph, saying there were Indians languishing in a detention centre in Guatemala. But no idea about the United States’ involvement in it.

Subsequently in 2006, with other Masters students at Geneva’s Graduate Institute of International and Development Studies, Michael set about developing a database of all immigration detention facilities on which credible information could be obtained. This also necessitated the creation of a typology for describing detention facilities and policies—one country’s ‘detention centre’ might be another country’s ‘reception centre’. Their scope was global but they directed their attention mainly to Europe, Australia and the United States.

Over time, Michael and his team saw a growing need to look beyond the borders of developed countries:

Increasingly, what’s happening is this effort to externalise detention practices, so we need to be able to pay closer attention to transit countries. Also, there’s a lot of south-south migration, and countries adopting policies that they are observing in developed countries, adopting them wholly for their context.

We’re moving towards more and more data collection and letting the data speak for itself instead of producing long narrative profiles. The kind of tools that are in the works would provide people the ability to choose the kind of policy tool that they’re interested in, get a sense of how widespread it is, bring up multiple variables, and ask complex questions about what might be the the drivers of certain kinds of policies.

The Pacific Solution might have looked like an innovation to Australian eyes, but Australia didn’t invent offshore processing.

It’s interesting. I think most people in the world, not only in Australia, will think that Australia is the leader in this, the innovator, but it was really the United States. When you go back in the policy discussions and look at the birth of the Pacific Solution, you see that these guys are looking at what the United States was doing in the Caribbean.

However, the Pacific Solution, unlike the similar US policy response, was heavily marketed. In pursuing deterrence, Australia achieved notoriety.

It remains very much under wraps in the United States. There were landmark Supreme Court cases about the treatment of people being interdicted at sea and their treatment, so there was attention, but it didn’t receive this global notoriety that Australia has with its offshore system. And as a result, it is kind of like the global bad guy.

Australia is not alone in its reliance on private contractors to operate detention facilities, though here it goes further than most other countries.

When you look across the entire world at the privatisation of immigration detention, Australia is one of a very small number of cases that has fully privatised its entire immigration detention infrastructure. The UK follows closely behind and then the United States. So this is quite interesting, with the English-language countries doing this. It also tells us something about how the companies have familiarities and subsidiaries in these different countries, and a knowledge of the political system.

Australia can claim to have invented the practice of mandatorily detained asylum seekers arriving by boat, but it is no longer the sole practitioner.

Australia is at the centre of this interesting story of the transmission of the detention practice of mandatorily detaining people arriving by boat. Canada looked at the Australian case to implement its policies after the Tampa case. A boat [MV Sun Sea] arrives in the port of Vancouver with several hundred asylum seekers from Sri Lanka. It’s created a lot of public hysteria. What are we going to do? Let’s do what Australia does.

Refugee trading, as under the present government’s resettlement deal with Cambodia and the previous government’s ill-fated deal with Malaysia, is a second area in which Australia can lay claim to innovation, but the idea has now been well and truly scaled up in Europe.

The European Union arrangement with Turkey is a really important case to look at in this regard. It’s crazy. Turkey’s a country that does not provide in its law the kind of asylum regime that would be necessary for Europe to do this. They have an obligation not to send people to countries where they won’t receive appropriate hearings. So, it’s quite remarkable. Europe, like Australia, is just flouting international obligations in the face of everybody, as if this is just par for the course.

Australia is also in step with various other countries, particularly the United States and to a lesser extent the United Kingdom, in using expedited processing and removal processes, which reduce or avoid any possibility of appeal, as well as in turning back boats and denying asylum seekers on the mainland the right to work.

There are, however, two points on which Australia stands alone. The first is the mandatory offshore detention of asylum-seeker children arriving by boat.

Who else is doing that? That’s an outlier. I don’t think that exists anywhere else. I don’t think there’s a single country that has that kind of policy. As for the detention of children itself, Australia’s not an outlier, unfortunately.

The second is the aggressive public presentation of immigration detention policies.

Australia’s eagerness to communicate its detention policies and their consequences does have one positive aspect, even for critics.

To give them their due, they provide extraordinarily good statistics on their mainland detention system. Australia really provides a massive amount of data. We did a freedom of information request to 30 countries in the European region, and only a handful responded to basic questions like: Where are your detention centres? (if they weren’t publicly known); How many people are detained there?; Do you detain asylum seekers? Less than half gave us full answers to these simple questions. In Australia, that’s not a problem. You get all that stuff. I think it’s very important for the Australian government to know that its public knows everything that its doing, because this is really publicly accepted.

The role of international organisations

International organisations—particularly the UN Refugee Agency (UNHCR) and the International Organization for Migration (IOM, a non-UN intergovernmental agency)—can hardly avoid becoming entangled in the immigration detention policies and practices of their member countries. For one thing, it’s their job to assist migrants, regardless of how they got to be wherever they are; for another, the more helpful an agency is, the more funding is available to it.

UNHCR engages about as much it needs to in order to fulfil its mandate; IOM goes further, to the extent that it sometimes looks like hired help—as in the case of its funded work for Australia with refugees in Cambodia and Indonesia.

We’ve had to look into this, as we focus less in destination countries and more on transit situations and immigration control in developing countries. We almost always find the involvement of international organizations at some level, IOM being the most important one. But UNHCR finds itself in situations that are very uncomfortable for it—playing a role inside ad hoc facilities and detention centres, doing asylum processing but nevertheless engaged as one of many partners in a detention situation. IOM, I don’t think they’re ever uncomfortable about this.

The responsibilities of detaining states

The work of the Global Detention Project over the past decade is impressive in its scope and depth, and portrays above all a progressive abdication of sovereign responsibility.

There’s a small building on the tarmac in the International Airport in Seoul, and that small building is where people who are refused entry into South Korea have to sit for weeks, sometimes on end, to wait for a flight out, and it’s operated purely by a consortium of airlines. There are militia running detention centres in parts of Libya that are no longer governed by anything that you could call a state. In Mauritania, Spanish international development aid refurbished a schoolhouse to hold people interdicted there, and there are all kinds of conflicting claims, for years, about who has custody of them.

So Australia’s not unique. This is happening quite a lot and raising very disturbing questions about custodial authority.

The difficulty—and from here on I am editorialising, not paraphrasing Michael—is not so much that asylum seekers are increasingly held offshore, or even that bona fide refugees who came by boat will not be granted residency. One can disagree with, but not summarily dismiss, the arguments for such measures—that they reduce the incentive to embark on hazardous sea voyages and that they lead in the direction of regional burden-sharing.

However, the actual trajectory of developed countries’ policies and practices over the past decade is tending toward a situation in which no states accept a duty of care for asylum seekers—even the states that are detaining them or having other states do so. Humane detention, rapid processing and rapid resettlement under regional or multilateral agreements among parties to the Refugee Convention are hardly beyond the bounds of possibility, but so far the desire to deter has comprehensively trumped the instinct to protect. There is certainly scope for Australia to innovate.

Michael Flynn is the Executive Director of the Global Detention Project.