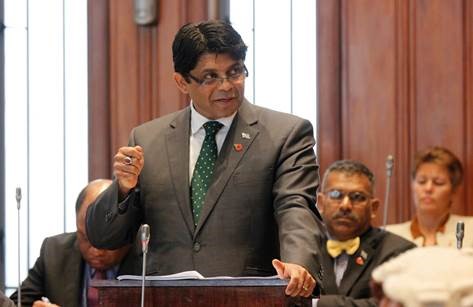 Fiji’s 2016 budget was delivered last month by the Minister for Finance and Attorney-General, Aiyaz Sayed-Khaiyum, with the theme of “a strong Fiji, a fair Fiji, a healthy Fiji”. The second budget of a democratically elected Bainimarama government, it included a few surprises and policy reversals, which are discussed below. As a whole, however, the budget was very much a continuation of budgets delivered by the government in previous years (including prior to its election).

The highlights of the 2016 budget include:

The context in which the budget was delivered is positive, with Fiji expected to record growth of 3.5% in 2016 (a slight decline on expected growth of 4% in 2015, and actual growth of 5.3% in 2014). The Fiji economy has now recorded positive growth every year since 2010, reflecting both increased government investment and higher levels of confidence in the economy. Inflation is also low.

Economic growth has helped reduce the risk associated with high levels of government spending. The Fiji government continues to incur deficits as a result of record spending, with the net deficit incurred by the 2016 budget measuring FJ$286m, or 2.9% of GDP (this excludes repayment of existing debt, which leads to a gross deficit to FJ$445m, or 4.5% of GDP). This is higher than the net deficit set by the 2015 budget, which was FJ$214m, or of 2.5% of GDP, although the actual deficit in 2015 is likely to be higher given that a number of asset sales flagged in the 2015 budget did not proceed. Indeed, the actual net deficit in 2014 was 4% of GDP, more than twice the 1.9% figure set in the 2014 budget.

A more accurate figure for the deficit would exclude one-off asset sales (this would also be closer to the Government Statistics Framework adopted by the IMF since 2001, which incorporates asset sales as financing rather than revenue). For the 2016 budget, exclusion of one-off asset sales produces a deficit of FJ$606m, or 6.1% of GDP. This is a better figure for the simple reason that the government will no longer have the option of selling these assets once the sale proceeds. In Fiji, it is also likely to be more accurate given the fact that many asset sales flagged previously, in both the 2014 and 2015 budgets, have not yet proceeded. The impact of including these asset sales in the 2014, 2015, and 2016 budgets is highlighted in Figure 1. 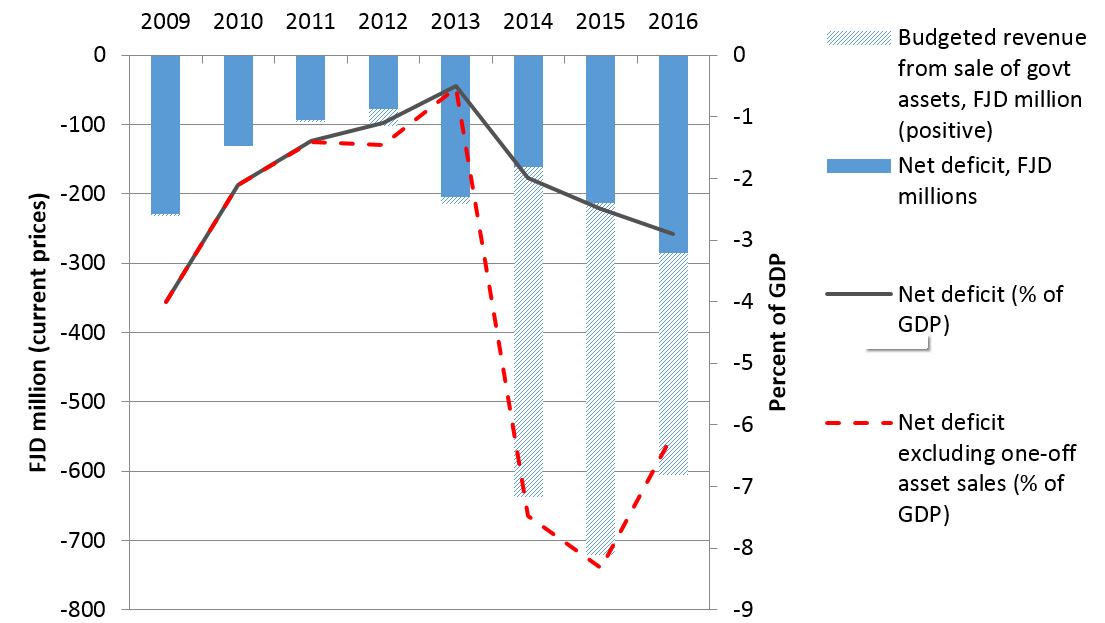 Notes: The purpose of this figure is to illustrate the impact of excluding asset sales from net deficit figures. As a result, 2014, 2015 and 2016 budget figures are used for these years. These figures do not necessarily reflect actual deficits. The actual net deficit in 2014 was 4% of GDP, while revised estimates for 2015 are yet to be provided.

These deficits are manageable, provided the good times continue. But they are also too high for a country enjoying good economic growth. The delivery of deficits year after year places Fiji at higher risk should it suffer a downturn, whether caused by a collapse in consumer confidence or (more likely) an external shock. Those that bear this risk the most are the pension fund members on whose savings most of these deficits are funded. This year’s budget aside, it is therefore encouraging to see the Ministry of Finance aiming to reduce debt (currently 48.3% of GDP) to 45% of GDP as part of its medium-term fiscal strategy.

The focus on infrastructure spending in successive budgets to some extent ameliorates these concerns, provided that (i) infrastructure spending is associated with higher quality infrastructure (and access), and (ii) this leads to productivity improvements, lower costs, and better access to markets for producers (thereby facilitating economic growth). Capital expenditure in the 2016 budget is FJ$1,341m, or 39.3% of total government expenditure, higher than ever before (this is shown in Figure 2). The Fiji Roads Authority (FRA) has again secured significant resources in the budget (FJ$636m). Transparency of this spending has improved, with the FRA publishing annual reports and half yearly reports. However, there are ongoing questions about the ability of the FRA to spend such funds, with the half yearly report published in September noting that 39% of budgeted funds had been spent so far in 2015. 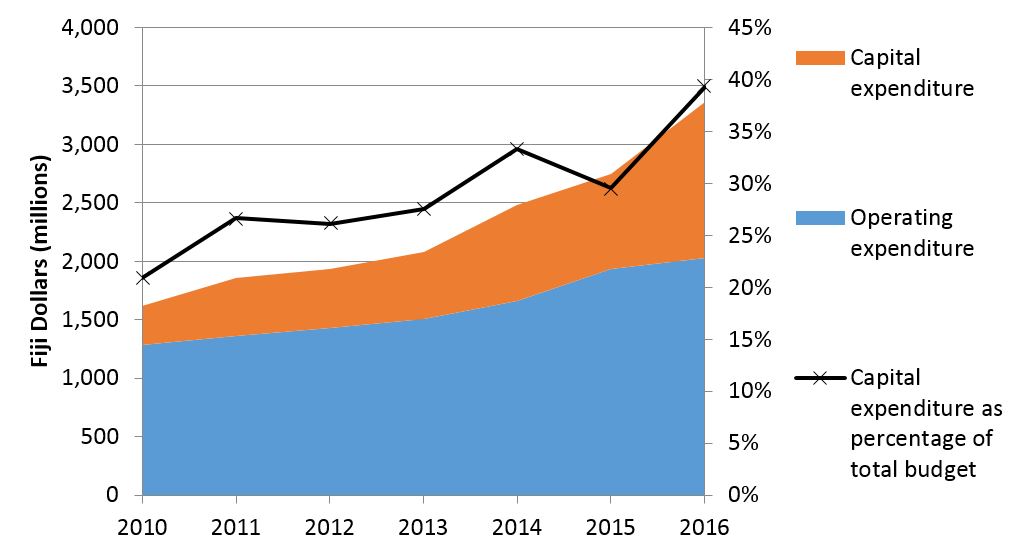 The changes to the VAT and to taxation of tourism are undoubtedly the most significant policy changes delivered by the 2016 budget.

The desire to increase revenue from the established tourism industry is understandable, given most major hotels are foreign-owned and tax revenue received from the sector in the past has been minimal. Nevertheless, the increase in the services turnover tax from 5% to 10% in addition to the imposition of a new Environmental Levy applied at 6% of turnover is a considerable impost on a specific industry.

More surprising are the government’s changes to value added taxation (VAT). For a government that in 2011 raised the VAT from 12.5% to 15%, while at the same time maintaining exemptions on payment of VAT for a range of essential goods (and introducing some new exemptions), these policy reversals are odd. The Opposition Finance Spokesperson, Biman Prasad, has argued that they point to a “confused government”. The reasoning behind the changes was not made much clearer by Aiyaz Sayed-Khaiyum’s budget speech [pdf]. He first made the claim that by “having exemptions to VAT we … create a regressive taxation system” because “if the logic is that VAT should be exempt on certain items because you want to protect the less well-off, then it does not work because the rich also don‘t pay VAT on those items”. This claim is false. Low income households spend more of their income on essential items than wealthier households. Imposing VAT on essential goods is regressive.

The Minister for Finance subsequently justified the move with the argument that the tax system should be “more equitable and transparent, which means simplifying and rationalising the system to root out inconsistencies or special privileges that serve no useful social or economic purpose.” While a reasonable claim on its own, this argument is undermined by other tax reforms announced in the 2016 budget. The Minister for Finance proceeded in his speech to parliament to describe a long list of special exemptions to import duty, many of which contradict other elements of the budget. These include:

Some of the changes are understandable where applied to inputs in industries where final outputs are subject to tax. However, many of the changes seem ad hoc, and without a clear rationale (unlike the VAT exemption extended to basic food items and essential medicines, which had clear equity objectives). These changes will serve to complicate the tax system in Fiji. The provision (and removal) of such exemptions also opens the door for rent-seeking behaviour, and for the extension of “special privileges” to which the Minister for Finance referred.

The 2016 budget is a strange document. As a whole, it is consistent with earlier budgets, reflecting the government’s strong desire to develop infrastructure using government funds, even at the risk of accumulating higher levels of debt. It announces some good initiatives, including efforts (yet untested) to reform the civil service. However, the 2016 budget’s inclusion of major policy reversals and a long list of ad hoc revenue decisions that are not well explained serves to undermine the government’s economic management credibility. Let’s hope that the Bainimarama government produces a clearer vision in its next budget.

Matthew Dornan is a Research Fellow at the Development Policy Centre. His previous commentary on the 2015, 2014, 2013, and 2012 Fiji budgets is also available on the Devpolicy blog.