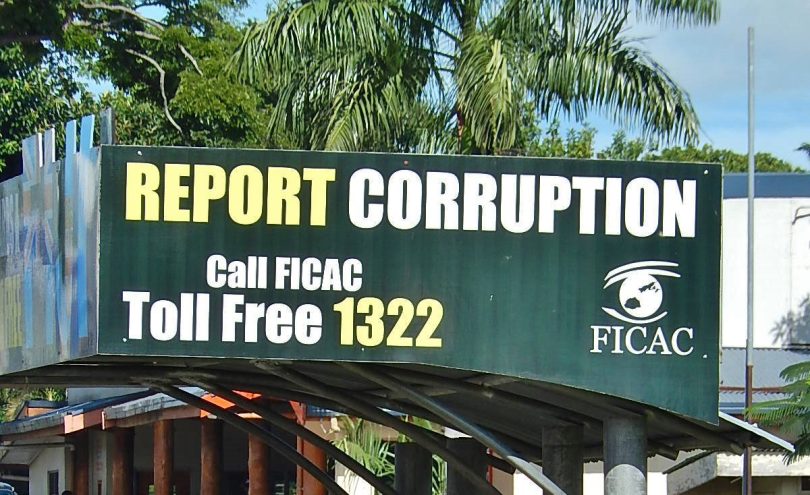 In 2006 Fiji’s current prime minister, Frank Bainimarama, seized power from a government that had been elected only seven months earlier. Named the “good governance coup”, the takeover was justified by concerns about corruption as well as racism. 16 years later, Fiji is about to go to the polls for the third time since Bainimarama took power. One question voters may well ask is: has the good governance coup delivered on its promise to address corruption?

In this article we argue that, while there have been some gains, political will towards anti-corruption efforts in Fiji appears to be running out of steam.

While the phrase “good governance coup” is an oxymoron, there are signs that the government’s subsequent anti-corruption efforts have borne fruit. The Worldwide Governance Indicators find that Fiji’s Control of Corruption percentile ranking has improved, from 60 in 2007 to 67.3 in 2021. This is better than Papua New Guinea (25) but lower than Micronesia (70) and Tuvalu (73). In 2021 the country scored 55 out of 100 (with a score of 100 equating to clean and 0 very corrupt) and ranked 45 out of 180 countries on its first appearance in over a decade on Transparency International’s Corruption Perceptions Index. On this index Fiji ranks better than neighbours Solomon Islands (score: 43/100), Vanuatu (45/100) and PNG (31/100). Fiji’s score was slightly better than the east African island nation Mauritius (which scored 54/100).

In 2007, the Bainimarama regime established the Fiji Independent Commission Against Corruption, known as FICAC, which became a key symbol of the good governance coup. FICAC has been accused of being politically motivated; in the lead up to the 2022 election the agency questioned the leader of the People’s Alliance (PA) party, Sitiveni Rabuka, and charged PA deputy leaders Lynda Tabuya and Dan Lobendahn with vote buying and breach of campaign rules. If it wins the election, the PA party has recently pledged to phase out FICAC within 100 days of forming office.

While complaints to FICAC have significantly increased since it was established, it only responds to a small fraction.

On a somewhat brighter note, the Office of the Auditor-General received a slightly higher proportion of the budget over the past decade: the government spent 0.15% of the budget on this agency in 2010 and 0.16% in 2020-21 (an increase of F$1.8 million in real terms). This is set to dip back down to 0.15% by 2022-23. Despite not losing financial ground, as one of us (Neelesh) argues, Fiji’s Auditor-General faces questions about the office’s independence and impact.

Diminishing political will towards key state-based anti-corruption organisations is also evidenced by what is not in the budget. Despite the 2013 constitution providing for the establishment of an Accountability and Transparency Commission – which is supported by civil society groups – the government has not provided the funding required to establish this agency. (In the 2022-23 budget it provides a paltry F$20,000 for this agency, which pales in comparison to the F$10.5 million budgeted for FICAC.) In February 2021, Attorney-General Aiyaz Sayed-Khaiyum explained that the budgetary allocation for the Accountability and Transparency Commission would not be forthcoming as a bill outlining its responsibilities had not been approved by parliament. This is still the case.

The government has increased financial support to the country’s police force. Spending on the police increased from 4.9% in the 2010 budget to 5.7% in 2020-21 – an increase of F$78 million in real terms. In comparison, in its 2020 budget the Papua New Guinean government spent just over 2% on its police force, and this is budgeted to fall to 1.6% by 2022. Fiji’s police, however, have their own problems with corruption. The Global Corruption Barometer survey found that, compared to other institutions, more people thought the police, along with members of parliament, were involved with corruption. Cuts to key anti-corruption organisations may exacerbate this.

Further reforms are clearly needed. Beyond being well funded and staffed, anti-corruption agencies need to be independent and publicly accountable, which suggests the need for multi-stakeholder oversight involving politicians, the business community and civil society. This could mean reforming – through greater oversight and the involvement of independent stakeholders – rather than abolishing FICAC. Establishing and funding an independent Accountability and Transparency Commission to investigate permanent secretaries and others holding public office could also help.

Whatever the outcome of the 14 December election, the next government will need to quickly establish (or re-establish) its anti-corruption credentials if Fiji is to build on any gains it has already made in the fight against corruption.

Neelesh Gounder is Senior Lecturer in economics and Deputy Head of School (Research), School of Accounting Finance and Economics at the University of the South Pacific, Suva. He is also a centre associate with the Development Policy Centre.