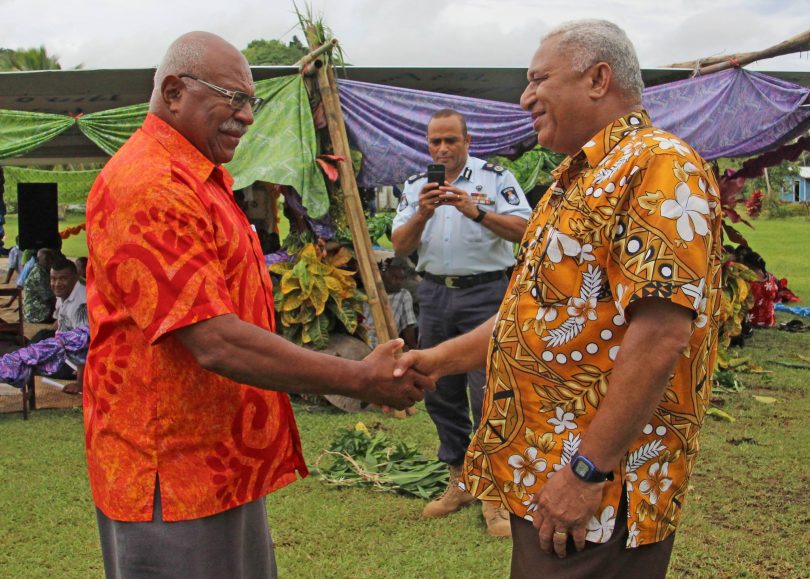 Rabuka and Bainimarama, pictured together in January 2018 (Fijian Government/Facebook)

The last time the Australian Labor Party came to power (in 2007), Australia was imposing sanctions against Fiji as a result of the country’s fourth coup in 2006. Relations worsened before they improved and, partly at Australia’s prompting, Fiji was suspended from the Pacific Islands Forum in 2009.

Fast forward to 2022. Fiji’s 2006 coup leader is now its prime minister, Fiji is chairing the Pacific Islands Forum, and it was the first Pacific country that Australia’s new Foreign Minister, Penny Wong, visited. In fact, not only is Frank Bainimarama prime minister, but his main rival in elections scheduled for later this year is the leader of Fiji’s first coup, in 1987, Sitiveni Rabuka.

How did this come to pass?

The only coup leader to have actually suffered as a result of their actions is George Speight, who led Fiji’s third coup. Significantly, Speight was not a soldier, and was only backed by one faction of the army. He was sentenced in 2000 to life imprisonment and remains in jail to this day. By contrast, both Bainimarama and Rabuka were senior military leaders. And they were clever and powerful enough after their coups to ensure that Fiji’s constitution was rewritten to absolve them of any legal wrongdoing.

Rabuka was the pacesetter in terms of rewriting the constitution, and the first coup leader to become PM, returning five years after his coup to successfully contest the 1992 elections. He served as PM to 1999. Bainimarama was Fiji’s first coup leader to decide not to step back, but rather to stay in politics. He gave himself eight years of uncontested rule before facing elections, enough time to put him in a position to win.

Fiji’s coups have been bad for both the country’s economy and for its democratic standing.  Today, it is classified by Freedom House as “partly free”. The think-tank sums up the situation in Fiji as follows:

The repressive climate that followed a 2006 coup has eased since democratic elections were held in 2014 and 2018. However, the ruling party frequently interferes with opposition activities, the judiciary is subject to political influence, and military and police brutality is a significant problem.

Combine this with whatever genuine support Bainimarama commands, and it has been difficult, indeed impossible so far, to dislodge him from power. This in turn has made those who want him out think that their only way to depose him is to back another strongman, another former coup leader and PM. Rabuka is seen as more moderate than some of the other alternatives to Bainimarama. But also, only Rabuka, it is now thought, can take on Bainimarama.

Is this progress to democracy, or entrenchment of a coup culture? It has been 16 years since the last coup, in 2006. If Fiji was on a path to democracy, one might accept this dominance of coup-turned-political leaders as a necessary transition, a price to be paid to return Fiji to liberal democratic ways. If only this were the case.

It is certainly true that the coups have led to a massive out-migration of Fijian Indians, whose share in the population has fallen from a threatening 50% in the late 1980s to only about 34% now. Ethnic tensions, a driving factor behind all the coups to date, have lessened, though by no means disappeared.

But it would be a serious mistake to think that coups are a thing of the past. Rabuka and Bainimarama are both ageing: Rabuka is 74; Bainimarama is 68, and recently had serious heart surgery. Once they retire or die, it is quite possible that the Fijian political scene will become unstable and/or unpredictable, and that the army will, over time, see it as necessary to intervene. After all, it now has the constitutional role, given to it by Bainimarama, of ensuring not only Fiji’s security and defence but also its “well-being”. The military describes itself as its country’s “guardian”.

In the meantime, Fiji remains stuck as, at best, a semi-democracy. Just last year, several MPs were arrested for opposing government legislation. A recent US government report on Fiji notes credible reports of “cruel, inhuman, or degrading treatment by government agents [and] serious restrictions on free expression and media, including censorship; substantial interference with the freedom of peaceful assembly; and trafficking in persons”.

Fiji’s brand of authoritarianism is highly personalised. A group of women are challenging a new law that requires married women who change their name to also change their birth certificate if they want to vote, a rule introduced last year that may disenfranchise up to 100,000 women. This change apparently arises from a court case involving an opposition MP who incurred the government’s ire. The courts refused to disqualify the MP on the basis of the name he used to register to vote — not the one on his birth certificate. (The MP in question has since been sent to jail on other charges.)

The government also, at the start of last year, expelled the Vice-Chancellor of the University of the South Pacific (USP) and has refused him entry back into the country, because he blew the whistle on the former VC who is a government ally.

The government has this year charged prominent opposition-affiliated lawyer Richard Naidu with contempt of court because of a social media post he made responding to a spelling mistake in a court judgement. Amnesty International has highlighted the “climate of fear” this charge contributes to.

As James Loxton has recently shown, the re-emergence of authoritarian leaders after democratic transitions is a global phenomenon.

Thailand provides perhaps the closest parallel to Fiji. In that country, after enduring decades of alternating coups and democracy, the 2014 coup leader General Prayut Chan-o-cha decided that he would not relinquish power, and transitioned out of his military role into political leadership. Since then he has stayed as prime minister, winning elections in 2019, and protected by the same sort of rigging of rules that Bainimarama has engaged in. However, while Thailand has had many more coups than Fiji, only in the latter do we see two former coup leaders vying for power.

The situation in Fiji seems widely accepted. In 2014, former soldier turned academic Jone Baledrokadroka wrote of the “acquiescence to military intervention” of the Fijian people as “a hallmark of politics in the country”. Many coup critics have left the country; some have died. A number linked to the coup and/or subsequent governments now hold leadership positions within regional and international organisations.

International partners have also changed tack. Australia’s Coalition, when it came to power in 2013, promised and delivered a new, more constructive approach to Fiji, on the basis that the adversarial approach of earlier years was driving Fiji into the arms of China. In the decade since, as concerns about China have escalated, those about democracy and human rights have been put on the back burner. Australia is now even supporting Fiji’s army, building a base to support its export of peacekeeping forces.

Rabuka first went up against Bainimarama in the last, 2018 elections, and lost. His prospects are thought to be better this time round according to public opinion polling, but the lack of a united opposition makes predictions difficult.

If Bainimarama is defeated in November, it will be the first time Fiji has changed its PM through the ballot box since 1999. That itself would be a victory for democracy. However, the fact remains that, whatever the outcome of this year’s election, it is most likely that the country’s next prime minister will be someone who first came to power through the barrel of a gun. This is a clear sign of how deeply entrenched in Fiji’s politics its military has become.

Note: George Speight led Fiji’s third coup not its second. The text has been corrected.