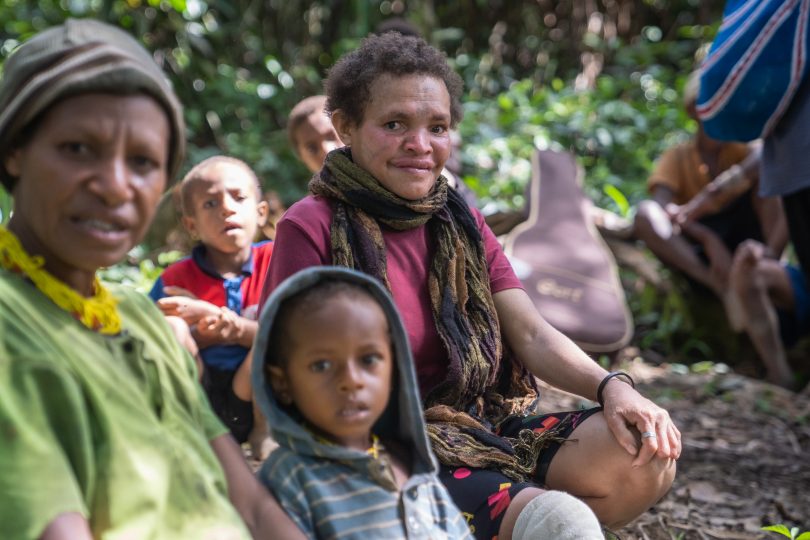 Jesten Jessy was bedridden with symptoms consistent with COVID-19 during the pandemic. Later, he recalled that he had seen a woman doing something, involving sugarcane sprouts. A magic spell to give him fever and weakness? So, while she was sleeping, he beat her to death with a piece of timber. Not every case like this makes it to court, but this one did. The judge was not impressed.

Sorcery accusation related violence (SARV) makes consistent headlines in Papua New Guinea (PNG) these days. The colonial era Sorcery Act 1971, which tried to accommodate indigenous beliefs alongside Commonwealth law, was repealed in 2013, making way for a straightforward addition to the criminal code seeking to make it abundantly clear: you can’t beat people to death with a piece of timber, even if they are whispering unknown things to sugarcane sprouts. The message that a belief in sorcery does not justify any form of violence is slowly percolating into communities – ever so slowly. A lot of misunderstanding and resistance remains.

What then is the role of the courts and the sentences they hand down? Young Jessy was given an 18-year sentence, meaning he could be a free man at the age of 40. This is consistent with the recent trend of sentences handed down by the courts for SARV, as our research, described in a new policy brief, demonstrates. Too much? Too lenient? Does the public understand the rationale behind the sentencing and see it as a deterrent? 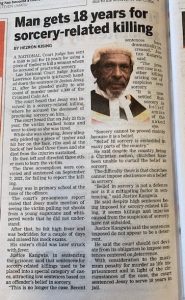 If one looks at the way the Post Courier article (not available online) that reported on the case is written, quoting His Honour Justice Kangwia who decided the case at length, one could surmise that both the Justice and the reporter feel there is a need to explain these details, yet again, to the reading public. Because people just aren’t getting it. There’s a frustration in the words, a quiet fury at the callous violence and the nonsense beliefs. “Belief in sorcery is not a defence nor is it a mitigating factor in sentencing,” Justice Kangwia declares. He doesn’t care what Jessy, or any other Papua New Guinean for that matter, believes. The law is the law.

But when we look at the data recently brought together by our research team, examining SARV prosecutions and sentencing over the last 20 years, it is striking how few cases are even in the courts. The victims and aggrieved parties who advance a SARV case into the court system are few and far between. How do we know?

It is hard to estimate how many instances of SARV occur annually in the other 18 provinces of PNG. Conservatively? Realistically? 400? 1,000? 3,000? And while a handful proceed to court, 98%+ do not. Moreover, the study found that the vast majority of those cases that made it to court involved a male victim, and that most cases involved murder. This means that the other numerous harms caused by SARV – mutilation of bodies, homes destroyed and children left destitute, food gardens razed to the ground – do not make it to the courts at all.

To be painfully blunt about it, no one knows how many Papua New Guineans are being attacked each year based on magical sugarcane stories. But it is a big number. So, what happens to the rest? In our 4-year study, we found that only 15% of victims die, leaving more than enough scarred, traumatised, unsupported, fearful people to seek redress in court. But they don’t. They move away. They go into hiding. They bounce around from safe house to safe house. They wait. They hope they don’t get attacked again.

One of these victims recently hiked with the first author through the remote forests of Hela Province to the village where she was attacked. A year ago, her attackers chopped off her right hand above the wrist, chopped off two fingers on her left hand, slashed her scalp, back and ribs, and finally cut through the tendons at her right knee before leaving her to die. A few weeks ago, she bravely gripped her walking stick with the three remaining fingers, and hiked back to tell her attackers that she forgave them.

The five attackers are her relatives, all part of a close-knit, interrelated community. She has no interest in seeing them behind bars, only that they are reconciled to her, and do not try to harm her or her son again. She is surely not alone in this. Most SARV cases in PNG take place among people who know each other and are in relationships with one another. For them, recourse to the law is one option among many, an option that can be time consuming, expensive, and ultimately seem counterproductive if it does not result in gutpela sindaun – the Good Life – wherein restored relationships are paramount.

From our vantage point, and from Justice Kangwia’s, this is cut and dried. 1. The law is the law. 2. Crime demands punishment. 3. Punishment equals deterrence. 4. Sugarcane magic is no excuse. But from this other relational perspective, it still makes sense to try to forgive, to stretch out a three-fingered hand across the divide and to reach for peace.

The law is not ahead of its time, but it is certainly ahead of most of PNG’s people. What does this mean for the future? The woman Jessy clubbed to death did not survive to see her attacker locked away. If she had lived, maybe only missing a hand, would she have pursued the case in court? Would she have felt compelled to try to reach for peace instead?

PNG is catapulting into a new age of personal accountability before the law. Some, such as Justice Kangwia, know where they stand and why. Many others are less sure. Navigating this divide, this pathway to a shared future, in a way that achieves gutpela sindaun, is the work of all of us – educators, legislators, leaders, influencers of all kinds.

Read the policy brief Prosecution of sorcery accusation related violence in PNG: What more is required?

Anton Lutz has lived in Papua New Guinea for 30 years. He works with remote communities on infrastructure development projects, and is a leading advocate against sorcery accusation related violence.