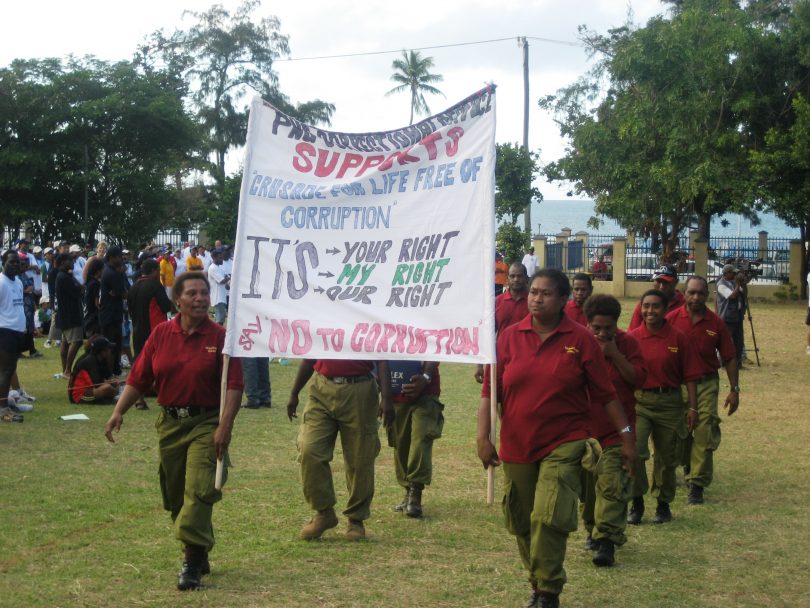 In PNG, we saw this trend during the tenure of the country’s previous prime minister, Peter O’Neill (PM from 2011 to 2019).

When current Prime Minister James Marape replaced O’Neill in 2019, he pledged to address corruption, established a commission of inquiry into the controversial UBS deal (with the resultant report recently tabled in parliament), set up a parliamentary committee into corruption in the health sector, passed whistleblower legislation, and established a new Independent Commission Against Corruption (ICAC). His government also allocated more funding for key anti-corruption agencies.

In our previous analysis, we highlighted some of these initiatives along with a rise in allocated funding to suggest that the new Marape government, like the previous O’Neill-led government, had brought in an initial and modest anti-corruption boom.

We find that, overall, for five key anti-corruption organisations – the Ombudsman Commission, the new ICAC, the National Fraud Squad, the Auditor-General’s Office, and the Financial Analysis and Supervision Unit – much of the allocated funding promised in the Marape government’s first budget for 2020 did not materialise. Figure 1 shows that, in 2021 prices, anti-corruption agencies received almost 10 million kina less than they were promised. Budgetary allocations for these organisations were cut for 2021 and 2022. 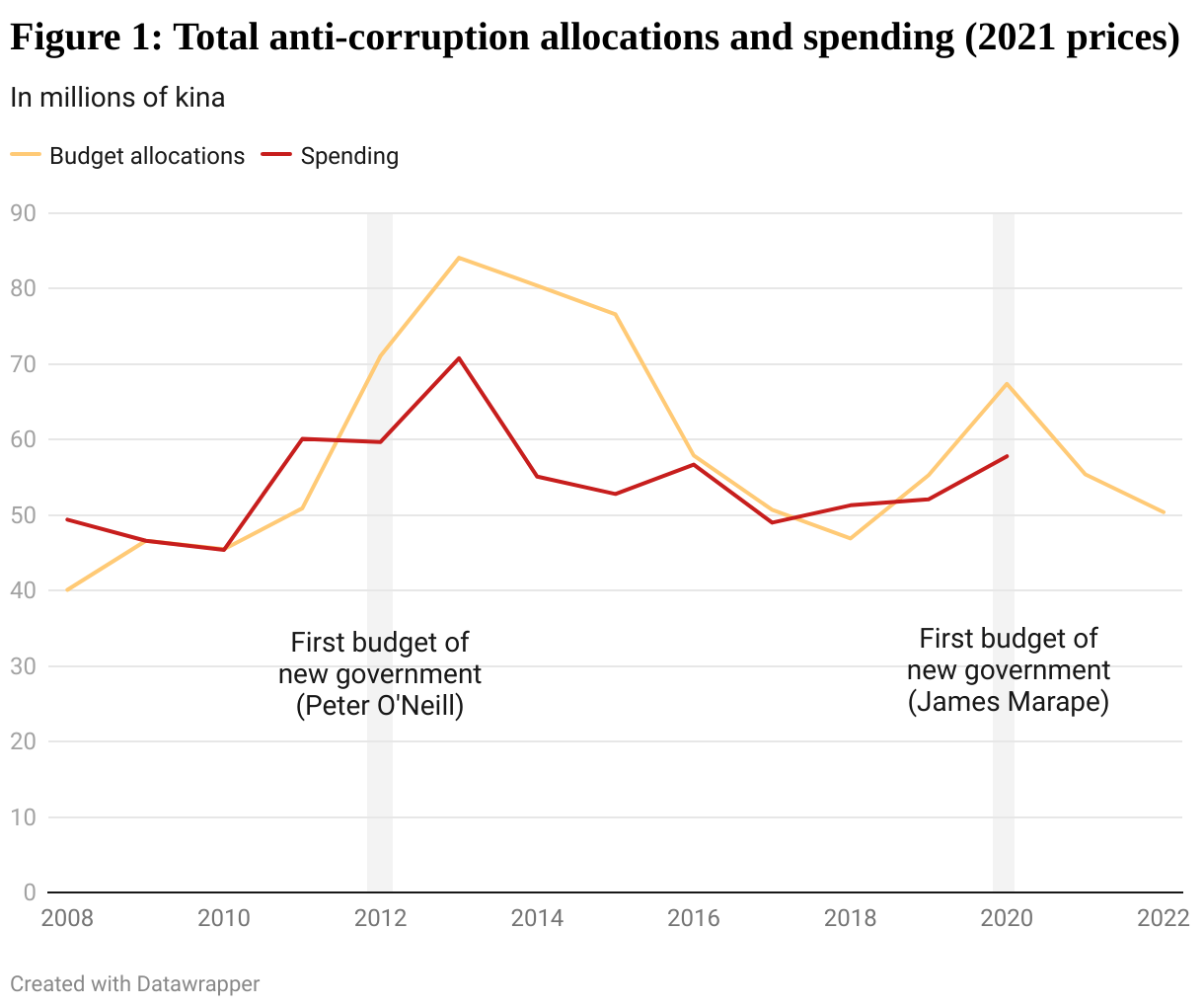 Figure 2 presents allocations for and spending on these organisations as a proportion of the overall budget since 2008. Arguably, this allows for a fairer comparison over time because it adjusts for the amount of money available to governments, which increases in the good times and reduces in the bad.

The figure shows that while the Marape government promised 0.33% of the budget to these five anti-corruption organisations in 2020, they only received 0.27%. This is slightly higher than the percentage of the budget they received in the year before (0.26%). 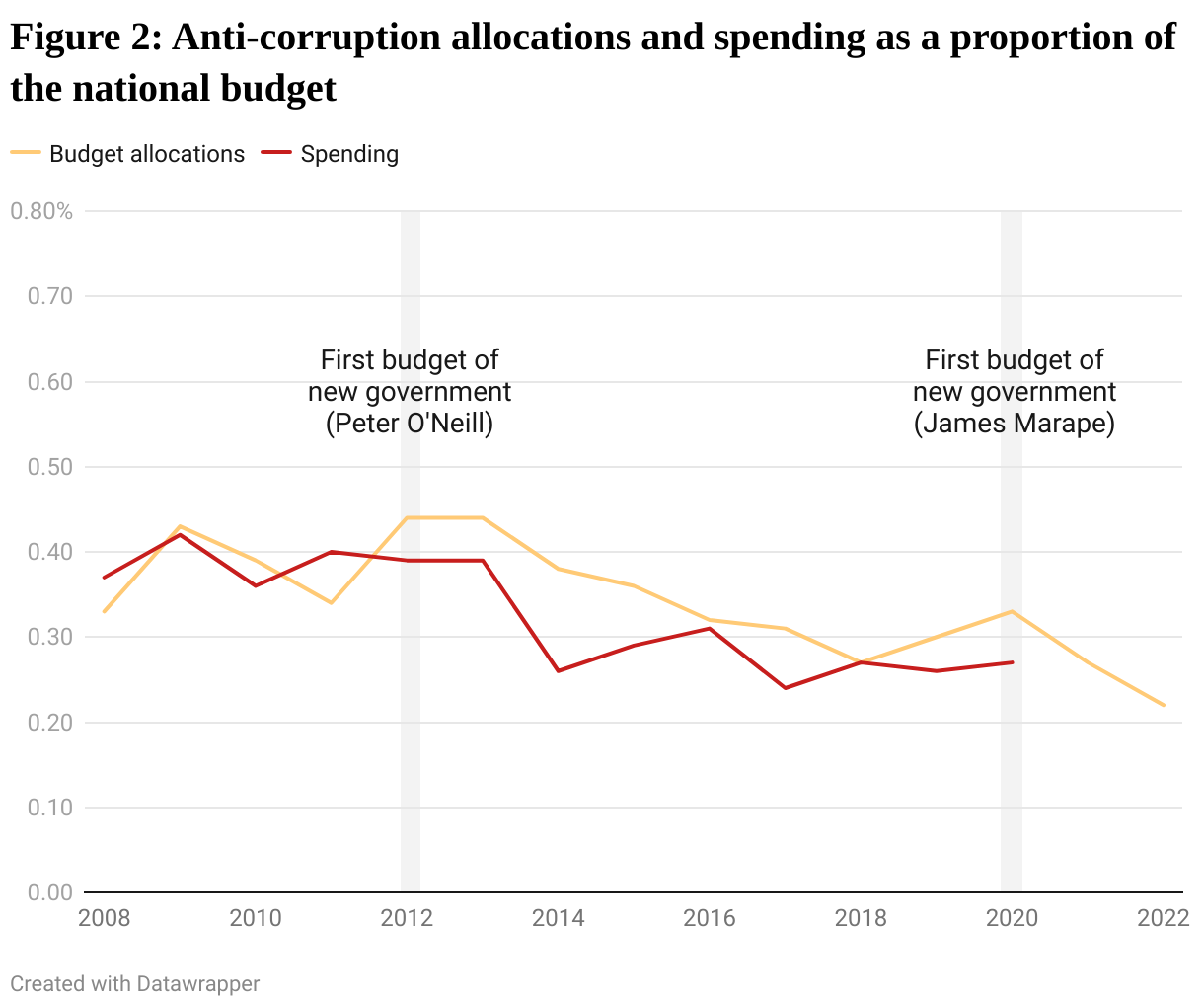 In 2022, relative funding for the nation’s anti-corruption organisations is set to drop to the lowest level since our records begin in 2008. This is despite the government allocating, in 2021 prices, 4 million kina in 2021 and 1.9 million kina in 2022 for the new ICAC.

Progress on the new ICAC has slowed due to the Ombudsman challenging provisions within the Organic Law on the Independent Commission Against Corruption.

When we drill down to individual agencies, there is some good news. In 2020, the Fraud Squad received almost double what it was promised (in real terms it received 1.35 million kina against a budget promise of 720,000 kina). All other anti-corruption organisations received less than what was allocated.

So, it appears that at least one aspect of PNG’s boom-and-bust cycle is alive and well. Despite commitments to addressing corruption, financial support to key state-based anti-corruption organisations has reduced. Funding for these agencies appears to have gone ‘bust’.

It is true that the government has had to deal with an economically and socially devastating pandemic, which has shaped funding decisions. And it has made some effort to report COVID-19 expenditure. However, some have raised concerns about the lack of transparency associated with funding to deal with COVID-19, suggesting strong anti-corruption organisations are needed now more than ever.

The financial trends we identify need not be the end of the story. The government can still decide to reallocate funding to prop up these anti-corruption organisations. It is also possible that whoever takes the reigns of the new government after this year’s election will increase allocations to these agencies. The boom-and-bust trend we identify suggests that this is more likely with a new prime minister. Still, this trend is not ‘baked in’. In PNG politics, as with many other aspects of the country, it is always important to expect and hope for the unexpected.