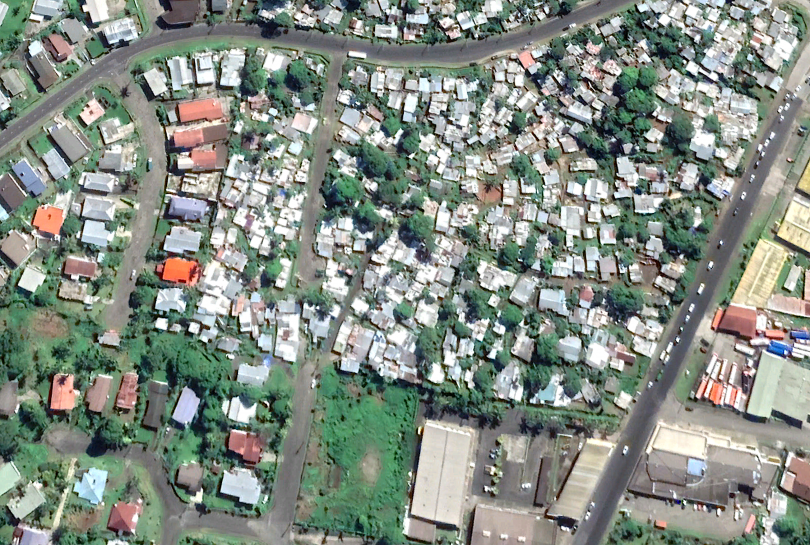 Fiji’s COVID-19 story started with the Fijian Government taking action in the form of travel restrictions to Fiji and mandatory border quarantine to keep the virus out. This was largely driven by an anticipation of Fiji’s lack of resilience due to communal living, high NCD (non-communicable disease) rates, a fragile health system, and so on.

However, in the context of the current COVID-19 community outbreak in Fiji, while case numbers are soaring, the Fijian Government response has been mostly reactive and ‘outward looking’, towards foreign aid, foreign expertise and vaccination. While external support is needed, it is urgent to again look ‘inward’ as well, to understand problems of ordinary Fijians on the ground, and to provide context-specific proactive solutions. 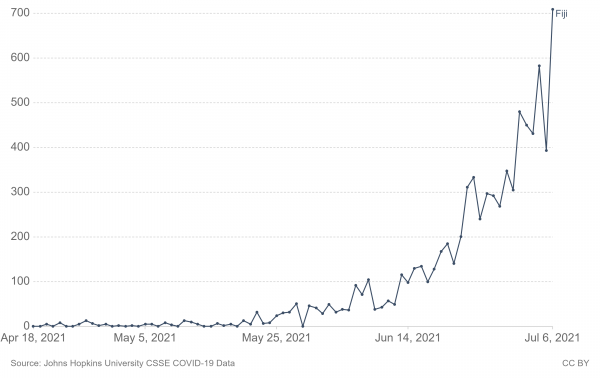 Fiji has recorded a total of 7,870 (at 7 July) COVID-19 cases since the second community outbreak started in April 2021. Since then, 40 people have died due to COVID-19. The current seven-day average of new cases per day has increased to 503 and is on an upward trend. While these absolute figures are not alarming in a global context, they are dire in relative terms, particularly so for a specific area within Fiji.

One COVID-19 case has been reported on Gau Island (Eastern Division) and two on the island of Vanua Levu. The remaining current active cases are on Viti Levu, the archipelago’s largest island. Viti Levu is home to about 80% (704,847) of Fiji’s total population (884,887, in the 2017 census). Hence, while knock-on effects of COVID-19 are felt to varying degrees across the Fiji Islands, the epidemiological situation is particularly acute for the vast majority of Fijians.

On Viti Levu, the Lami–Suva–Nausori area is the epicentre of the current outbreak. On 26 April 2021, it became a medical containment zone, and movement to and from the area has been officially restricted for the general public since then. Given these measures, this Lami–Suva–Nausori area effectively became a ‘COVID-19 island’ on Fiji’s main island.

This ‘COVID-19 island’ has a total population of about 268,000. On this ‘island’, the seven-day average of new cases per one million population is not 569 (as calculated based on Fiji’s national population by the Fijian Government), but about three times higher. This highlights that within the Lami–Suva–Nausori containment zone—where, apart from a few exceptions, nobody can move out—people are highly exposed to the novel virus and in a highly critical situation which calls for urgent action.

While Fijians on Viti Levu are currently highly exposed to COVID-19, they are also particularly sensitive given context-specific spatial and social challenges that can be beyond an individual’s control.

On Viti Levu there are about 114,000 people living in informal or squatter settlements, of which about 63,500 are within in the Lami–Suva–Nausori containment zone. These settlements are densely populated places and among the virus hotspots. Living conditions in squatter settlements typically involve crowded households, little (if any) space between houses, and limited sanitation and hygiene facilities.

Communal living is widespread across squatter settlements, urban villages, and other residential areas in the Lami-Suva-Nausori containment zone. Household sizes are generally bigger than in Western countries, and households often include three generations. This means elderly people are more at risk as they cannot easily isolate. At the same time, identifying a ‘household’ and determining who should be in a ‘bubble’ is difficult. ‘Stay home’ is equally difficult to define, because the concept of ‘home’ has a broader meaning in the Fijian context compared to Western societies. Thus, the application of Western concepts is problematic.

Public spaces on Viti Levu are typically more squeezed than in so-called developed country contexts. For example, the aisles in supermarkets such as New World in Suva are significantly narrower compared to those in New World in New Zealand. Gyms, which the Fijian Government plans to reopen despite the soaring COVID-19 cases, tend to have more equipment per square metre than their counterparts in so-called developed countries.

Physical distancing has been reported to be a major problem. While it is difficult to achieve at ‘home’ (see above), physical distancing is also challenging in public spaces. Fiji, particularly the Suva–Nausori corridor, underwent rapid urbanisation over the past years. Thus, local behaviour is still in the process of adjustment to increasingly crowded urban spaces.

Vaccination is currently being promoted as the panacea for ending the COVID-19 crisis in Fiji. It is an absolute necessity and an important component of the response. However, due to various circumstances, it is not a straightforward choice for everyone to get vaccinated immediately. For example, some students at the University of the South Pacific in Fiji would rather postpone vaccination until after the exam period as they cannot afford to be down with side effects, being under pressure to pass exams after a semester that has had many disruptions already. It is also crucial to remember that vaccination has so far not been available to every Fijian, nor is it readily accessible or equally distributed among all Fijians, increasing the challenges of those who are already vulnerable.

These spatial and social realities on the ground explain some of the challenges, and why physical distancing, or getting vaccinated, can be far from straightforward for people in Fiji. These explanations should not be used as an excuse for people who do not adhere to COVID-19 protocols and measures. However, this understanding is important in two ways. First, it highlights that one-size-fits-all measures from overseas are problematic, and that measures specific to the spatial and social contexts within Fiji are needed. Second, it can help generate much needed empathy for the current COVID-19 situation in Fiji. Both seem critical components for Fiji’s pathway out of the current crisis.

Each of us has a particular perspective on the current outbreak in Fiji, depending on factors such as the socio-cultural environment, sources of information and lived experiences. Our impression is that empathy has so far been missing from the Fijian Government. If a person becomes ill or dies because of COVID-19, there seems to be an underlying notion in the public discourse (strongly shaped by the Fijian Government) that it is because this individual did not follow protocols or did not get vaccinated. An understanding of the contextual circumstances and the difficulties that Fijians are experiencing on the ground is virtually absent in the response of the Fijian Government. Empathy is urgently needed, for it is a foundation of leadership which, in turn, is much needed in times of crisis.

Population figures used in this blog come from the Fiji Bureau of Statistics. The graph was downloaded from Our World in Data on 6 July 2021. The Fijian Ministry has an excellent website with the latest COVID-19 data.

Sargam Goundar is a Fijian researcher in geography. She is undertaking a PhD at the University of Otago and currently conducting field-based research in Fiji. She has previously worked at USP, UNICEF and the Fiji Ministry of Economy.

Kim Andreas Kessler is a researcher in development geography. He is undertaking a PhD at the University of Otago, and is currently in Fiji conducting fieldwork. He has previously worked at USP and the Swiss Agency for Development and Cooperation (SDC).