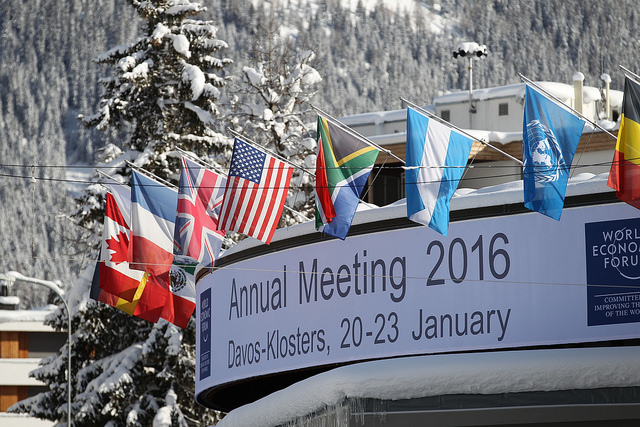 Last week, from January 20 to 23, many of the world’s most influential and powerful people – heads of state, chief executives, Nobel prize winners, monarchs and senior business leaders – gathered at the annual World Economic Forum, known as Davos, the city in Switzerland in which it is held.

This year’s theme, Mastering the Fourth Industrial Revolution, paraphrased as mastering the impact of the digital world on business, government and global systems, rings alarm bells as it’s likely to consolidate the advantage of the powerful while ignoring the basic needs of the poor. Many of those attending the forum believe the “fourth industrial revolution” has the potential to harness different forms of technology to improve global systems, and in turn reach new groups of people with goods and services.

But this industrial revolution is different to previous revolutions – the first built on steam and mechanical production; the second on electricity and mass production; and the third on electronics, information technology and automated production – as digital is instantly global, operates at breakneck speed, innovates in a multitude of ways, and merges physical and computerised worlds.

This all sounds pretty exciting. And it is, especially when innovative digital technology can be harnessed for good. For example, we’re using technology to detect unregistered births in Pakistan, giving previously undocumented children the registration they require to complete schooling, go on to further education and improve their chances of making a good living.

However, let’s not lose sight of the poorest of the poor, who do not have access to technology and are struggling with life’s most basic necessities, such as putting food on the table, and sending their children to school.

Technology has infiltrated many aspects of our lives, but not everyone is in the same position. Social media is used by 30 per cent of the world’s population, but what about the other 70 per cent?

In Indonesia, 29 per cent of the population has access to the internet, but what about the 71 per cent not online?

Even in Australia, one of the world’s most internet-infiltrated countries, the digital divide is prevalent, particularly when comparing non-Indigenous and Indigenous communities.

When basic needs are not being met, talk of digital technology and the transformational capabilities of breakthroughs such as nanotechnology and quantum computing are almost laughable. While many development gains have been achieved globally over the past 15 years, poverty rates are still alarming. According to the World Bank, 22 per cent of the world’s population live below the poverty line (equivalent to 1.2 billion people), and of that figure, a third are children under the age of 12.

The fourth industrial revolution may well lead to improved services that can reach poor populations, and this would be a fantastic, but to ensure no one is left behind, development programs that focus on meeting the basic needs of poor people and children must run in parallel.

At home in Australia, we know this.

The need for basic services that uphold the dignity of those less fortunate are at the heart of charity organisations and campaigns such as Swags for Homeless and the Salvation Army’s Christmas appeal. Both initiatives provide people with the bare necessities: a bed and shelter for the homeless and food on the table and a gift on Christmas Day for those struggling to cope.

An internet connection is secondary when food is what you need first.

Unfortunately, the Australian government’s aid program has recently drifted into this zone of believing that innovation can trump basic needs. Massive cuts to the aid program have led to programs that reached the poorest with basic necessities being cut, while at same time innovation has been spruiked as the solution. What we need is basic needs programs with innovation, not innovation as a substitute for basic needs.

If Davos focuses on how the wealthy can have driverless cars and benefit from artificial intelligence, while the poor continue to starve, it will have failed in its official motto: “Committed to improving the state of the world”. Any talk of innovation must take into serious consideration the gross inequality that still exists in the world.

Davos attendees and the Australian government must understand that technology is not a panacea when it comes to the poor. Technology can be an enabler, but it is not a substitute for tried and tested aid programs that deliver clean water and basic healthcare. After all, what’s the use of a smartphone if you don’t have food on the table?

This blog post is republished with permission from Fairfax Media.