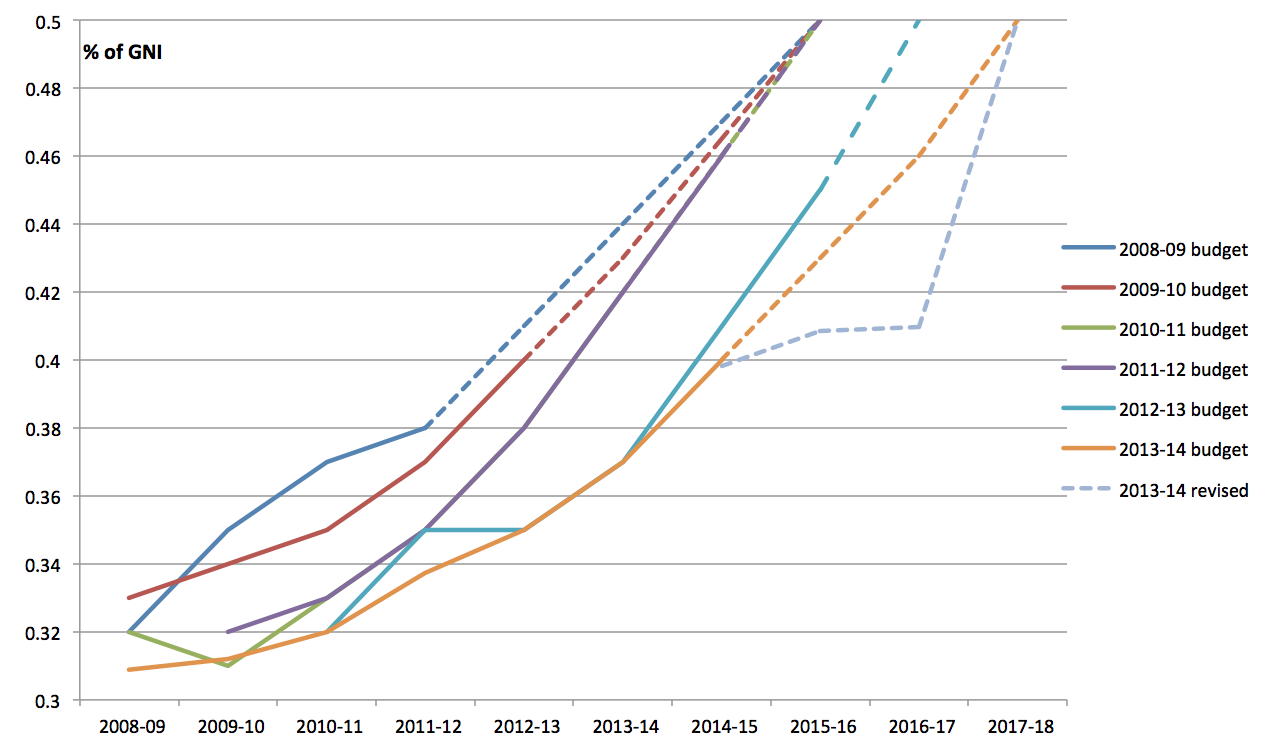 This post explores the implications of the August Economic Statement [pdf] for Australian aid, and for aid to PNG. The use of aid to fund the PNG resettlement solution – the part of the statement which in fact raises the most questions –  is explored in this companion post. Some graphs highlighting the latest aid budget developments are provided at the end of the article.

Pushing back the scale up

To get to 0.5% of GNI, aid will now need to be increased by $2 billion in 2017-18 (the first year outside the forward estimates, and so not subject to the current budgetary pressure). The largest aid increase ever in Australia is $620 million (2008-09). The average under Labor is $425 million. A single-year increase of $2 billion is not impossible. The UK increased its aid by  £2.5 billion this year to get from 0.56 to 0.7% of GNI. But against a backdrop of repeated postponements, it is fanciful to think the Australian aid budget will be increased by $2 billion in 2017-18.

The increases promised over the forward estimates are still impressive. In my analysis [pdf] following this year’s budget in May, I suggested that the 0.5% target was no longer credible, and that both sides of politics should coalesce around a more doable target, such as a $500 million increase in aid every year. Interestingly, that is what the Government is now promising us for the next three years with increases of $670 million, $510 million and $380 million respectively, an average of $520 million per year. This gets us to 0.4% of GNI next year, and then keeps us there.

Aid to PNG: expensive police, and other interesting details

PNG features prominently in the August Statement. It is promised $420 million more in aid over 4 years, an increase of about 20% over the current annual aid allocation of $500 million (plus any aid-eligible resettlement costs, on which see the companion post). PNG’s budget was set to increase in any case. This increase insulates it against a smaller or slower overall aid expansion, but should be seen in the perspective of a growing aid budget. Over the next three years, PNG is set to get about 20% of the overall aid increase. Another way to put the increase into perspective is to recognize that Australian aid to PNG has already increased by $100 million over the last five years.

Some interesting detail is released in the statement’s Box 3 about various PNG aid initiatives:

This graph shows aid/GNI ratio in successive budgets since 2008-09, which was the first budget to implement an expansion towards a 0.5% target. Solid lines are historical and budget years; dashed lines are forward estimates and, if required, projections beyond the forward estimates period to get to the 0.5% target. Revisions over time of the historical numbers and back-end-loading and postponement of the 0.5% target have both led to current and projected aid being much lower than earlier projected.

This graph shows aid increases (in current prices) since 2001-02. The blue lines are historical and this year’s budget figure. The red lines are calculated from the August statement.