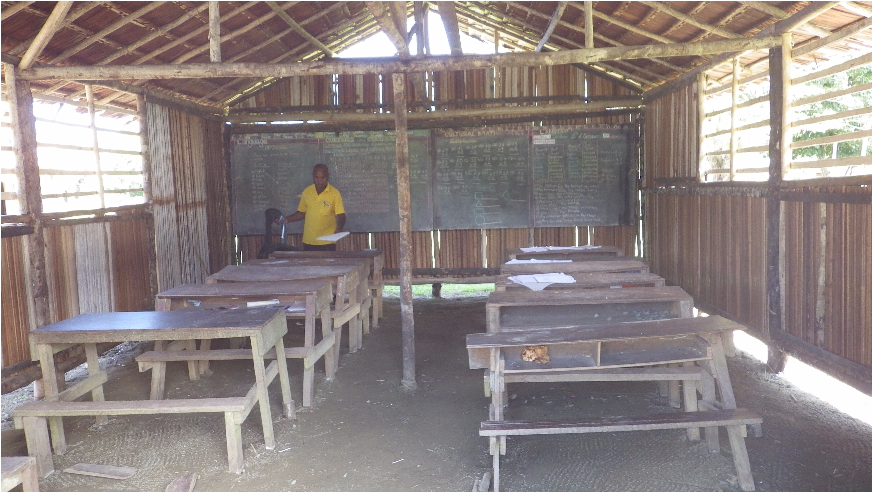 In 2012 the Papua New Guinea Government introduced the Tuition Fee-Free (TFF) policy, which effectively eliminated tuition fees for students in elementary school up to Grade 10. The policy put into action the PNG Government’s Universal Basic Education (UBE) Plan 2010–2019 [PDF], which aims to ensure that “all school-aged children have equal access to quality basic education in order to contribute to the development of the country”. This is PNG’s fourth and longest lasting attempt at free education; the TFF is entering its fourth year with funding of K605 million provided in the 2015 National Budget. In our recently released report A lost decade? Service delivery and reforms in Papua New Guinea we examine the effectiveness of this policy.

To contextualise the TFF’s achievements or otherwise, it is important to examine PNG’s past attempts at boosting student enrolments. In this blog post we reflect on three previous efforts to reduce the cost of schooling for parents in PNG and assess how well the TFF policy has been able to respond to the challenges that undermined these policies. In a forthcoming post we draw on the findings of our study to examine the impact of the policy on primary schools across the country.

Increasing school attendance has been a key challenge for successive PNG governments since the colonial period. While Universal Primary Education was colonial government policy, and the reach of primary schools was expanded under the Australian administration, education was mostly for the male few [PDF, chapter from this edited volume] by the time of independence. It was not until six years after independence that PNG made its first attempt to significantly boost student numbers by introducing a ‘fee-free education’ policy.

The attempt in 1981 to provide ‘fee-free education’ was met with hostility by many provinces, who – as academic Mark Bray noted here [pay walled PDF] – were concerned about the national government taking over the authority granted to them through decentralised legislation. Some provinces also raised concern that subsides offered by the national government to make up for school fees were based on erroneous calculations and would not be sustainable. In 1982 the policy was enacted in 14 out of 19 provinces (five refused to take part), but it was short-lived. In mid-1982 the newly elected Somare government significantly reduced school subsidies. They allowed schools to charge tuition fees (annual fees paid per student for school running costs), although children facing hardship were ostensibly exempted, and subsidies were allocated for students from low income families at community schools, high schools and the College of Distant Education.

This first experience did not deter future governments from dabbling in free education policies. In 1993 the Wingti government introduced wide-ranging reforms in the education sector, which included abolishing tuition fees. The promotion of the policy led some parents to believe that they would not need to pay any fees (tuition fees or project fees; the latter are for specific projects), although in 1993 many schools charged project fees (see page 126 of this PDF). The policy did not last long; with rising student numbers and ballooning costs it was soon scrapped. In 1994 the newly established Chan government reintroduced fees to schools.

Late in 2001, the Morauta government announced that it would more than double school subsidies to K150 million in 2002. The increases were promoted as enabling ‘free education’, however most provinces eliminated tuition fees, while keeping project fees. With the Somare coalition winning the 2002 election on a platform opposed to ‘free education’, the subsidy was significantly scaled back. Somare’s government reverted the school subsidy to 2001 levels; the K150 million subsidy was reduced to 60 million (see page 46 of this PDF). The subsidy was also redirected away from reducing or eliminating tuition fees; instead the government decreed that it was only to be spent on school infrastructure and maintenance.

With three previous failed attempts at introducing ‘free education’, has the current TFF been able to address some of their failings?

Mostly, yes. Some previous attempts channelled the subsidy via the provinces to schools, which meant that in 1981 (when provinces had significant autonomy) some provinces could undermine the national government’s efforts by refusing to take part. It also left open the possibility for delays in payment and misuse.

Compared to 30 years ago, provinces seem to have less desire to disrupt national government initiatives. And the TFF’s use of direct transfers of subsidies to school bank accounts bypassed provinces anyway. In 2011, the year before the TFF was rolled out; less than half the schools had subsidies delivered to their bank accounts. Most received their payment by cheque from the provincial or district administration. In 2012, 80 per cent of schools received a direct transfer to their bank account. While the first subsidy payment was late, the second was, for most schools, received on time. This meant that schools had more direct control over their finances, and paid less to access it compared to receiving it via cheque through the sub-national administration.

There are also signs that the confusion of previous attempts was less apparent in the roll-out of the 2012 TFF. From a standing start, the education system responded quickly to the government’s August 2011 announcement that it would abolish tuition fees. In January 2012, the department distributed a circular outlining how the subsidy would be administered. This circular was turned into a policy manual – the Fee Free Tuition Policy Management Manual [PDF] – which was distributed to schools. The manual set out the key roles and responsibilities of schools in administering the subsidy.

Our study suggests that most schools abolished their fees in line with these policy prescriptions: according to school principals in 2011, on average, official tuition fees were K97 per school, in 2012 this reduced to K9, suggesting that a small number of schools did not abolish tuition fees. While there was some variation between provinces, on average, project fees remained constant.

Compared to attempts at free education in 2002, more of the community were involved in the management of the subsidy – a requirement of the TFF policy. The number of Grade 5 teachers saying that the community-run Board of Management had most say over the subsidy doubled between 2002 and 2012. 70 percent of Parents and Citizens Committee members knew that subsidies to their school had increased between 2011 and 2012. This suggests that the community and schools were mostly informed about the subsidy and had a greater say over how it was spent, although there is room for improvement, as we discuss in the report. In particular, Board of Management committees need better access to school financial information, especially when principals leave the school.

However, this is where the TFF may be vulnerable. While the O’Neill government has consolidated political support, it is not immune to the shocks of PNG politics, particularly as the 30-month grace period preventing motions of no confidence will expire in early-2015. While the PNG LNG project will contribute significantly to GDP, much of the associated government revenue from the project will go towards interest payments associated with substantially increased government borrowings over recent years, rather than funding basic services. Furthermore, declining export prices and a hangover from the investment phase of the PNG LNG project will constrain future spending as the government tries to bring the national budget back to balance. Although we hope that the TFF continues, political change and concerns about government financing could make the TFF vulnerable to politicians and bureaucrats wanting to make cost savings.

And just because the TFF has avoided some of the pitfalls of previous attempts does not make it a successful policy. To find out what our results say about the way the TFF has been implemented, and whether it is meeting its objectives, stay tuned for our next post.

For now, in comparison to previous attempts at implementing fee-free education policies in PNG, it’s safe to say that the fourth time’s the charm.

Grant Walton and Anthony Swan are Research Fellows at the Development Policy Centre.