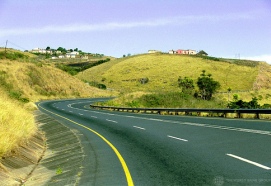 For what seems like decades, evidence-based policy has been a mantra. Practitioners are aware of this, just as enlightened researchers are aware of the pressures on aid agency staff. But even with the best will in the world, turning evidence into practice can be challenging. Let’s take the recent findings of the Overseas Development Institute’s (ODI) five year research program into the growth and development performance of patrimonial regimes in Africa. The program found that development and growth is possible under such circumstances as long as a number of conditions are met:

By contrast, four factors were found to be massive inhibitors of development:

I found this argument and the evidence provided to support it compelling. In my (new) job with AusAID, I reflected on the implications of these findings for our program in Papua New Guinea (PNG), a major strategic partner for Australia. It is hard not to conclude that PNG could be the model for the ‘where development is difficult’ category.  PNG is characterised by extreme historical, geographic and cultural diversity and it’s governance is characterised by the absence of any strong sense of national identity and by weak political and social cohesion. Many citizens have little engagement with the state: imposing few demands for improved services and receiving few benefits from the State. Informal institutions prevail over formal institutions. Politics is shaped by the ‘big man’ culture, where elites and politicians provide benefits to clients and supporters. MP’s spend big to win office and are expected to reward family and supporters appropriately.  There is no constraining authority at the political centre to discipline this system of rent management.

The data suggest that there has been little if any improvement in PNG governance over the last 15 years. The World Bank’s Worldwide Governance Indicators show all six categories of governance are worse today than they were in 1996: 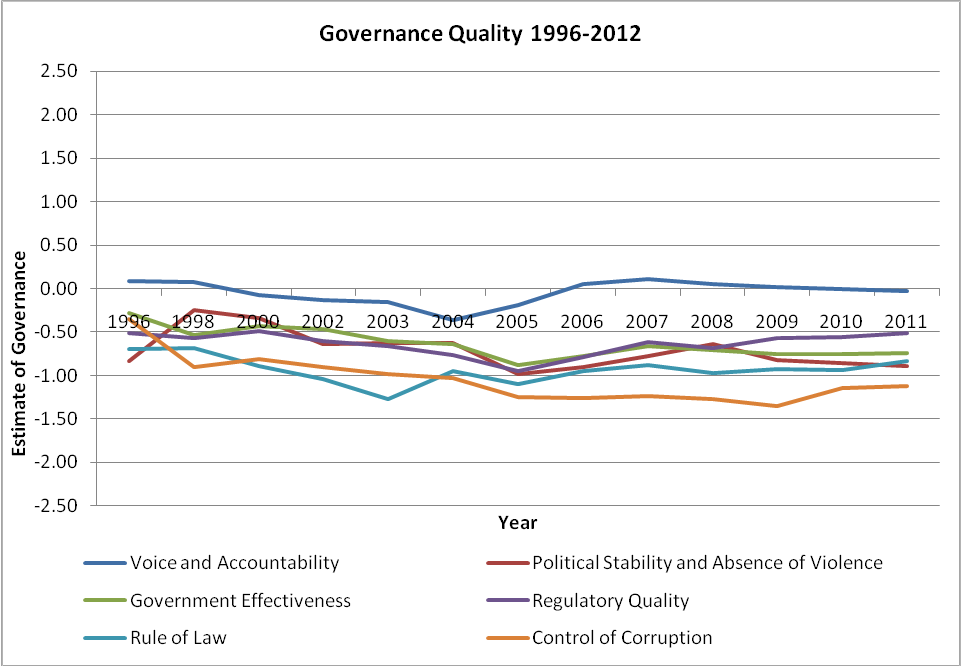 These figures make grim reading for AusAID. So the question is, with what we now know, what can we do differently? The overarching conclusion of the ODI research is that we must ditch the Principal-Agent assumptions underpinning much development work in such systems. If we then put this together with the other things we know (function not form, build on what’s there, context is all, institutions grow endogenously etc), what does it all mean for any approach to strengthening governance in PNG?

While I doubt there are any quick and easy solutions, there may be some things we can do differently. First, we have to recognise that we may need to choose between supporting the machinery of government – the Executive – and ensuring services are delivered to those that need them. The Executive is often not very interested in execution. We may need to accept that supporting the structures of the state may not contribute effectively to poverty reduction. This means finding other, non-state modalities for delivering ‘development’.

Second, we may need to accept that the issue in PNG is not about the volume of aid but about how we can change institutions and the incentives of politicians. More aid may make the problem worse by weakening the incentives to raise revenue domestically and undermining domestic accountability.

Third, we should (finally) give up the assumption that ‘building the capacity’ of individuals and organisations in the government will make a difference to service delivery on the front line. The best we can hope for is a difference in at the margins. Under these circumstances, the political elite has few incentives to use the bureaucracy as a developmental instrument, in the same way that Korea did in the 1960s and 1970s, and that Rwanda and Ethiopia are doing today. Maybe the best we can do is ensure the survival of the ‘shell’ of the state so that the macro-economy is reasonably managed and there is a sufficiency of security to prevent a downward spiral to conflict. Our objective here could be ‘stability at minimum cost’.

Fourth, we need to think more creatively about how to build on structures at local level. These structures should be visible, legitimate and have the capacity to bear a greater load. Never mind that they don’t look like the ones we know and love. We need to experiment and be willing to take risks.

Fifth, we may need to be willing to put a greater share of our funding outside the government system and rely increasingly on Community Driven Development. If the state has failed, let us acknowledge it and work with non-state providers.

Finally, we know that MPs and citizens like direct funds – funds that MPs can do with as they like. Why not give them an extra $1m each to spend with strict conditions? This would seem like a win-win option: MPs get extra cash and the credit for delivering the cargo, while at the same time learning about the nature and workings of accountability. Citizens benefit from the services provided by their MPs and begin to develop developmental expectations. This is the beginning of state-society relations: when wantoks begin to morph into citizens, and PNG may begin its journey to real, as against imagined, statehood.

These issues are being considered. The alternative is to continue on with what we have being doing for the last twenty years. It is clear however that one more push at doing this, but trying a little harder this time, won’t work. History and the new research from ODI tells us so. But designing a program knowing this remains tough. We know enough to know what should guide us on Monday morning, but we often end up having to triangulate among evidence, the desire to spend, and the legitimate priorities of our partner governments. But hey, whoever said development, let alone this governance business, was easy?

This is an edited version of the blog originally posted on the World Bank’s ‘Governance for Development’ blog on the 21st of December 2012, available here.

Graham Teskey is a Principal Sector Specialist at AusAID. This post represents his views and not necessarily those of AusAID.