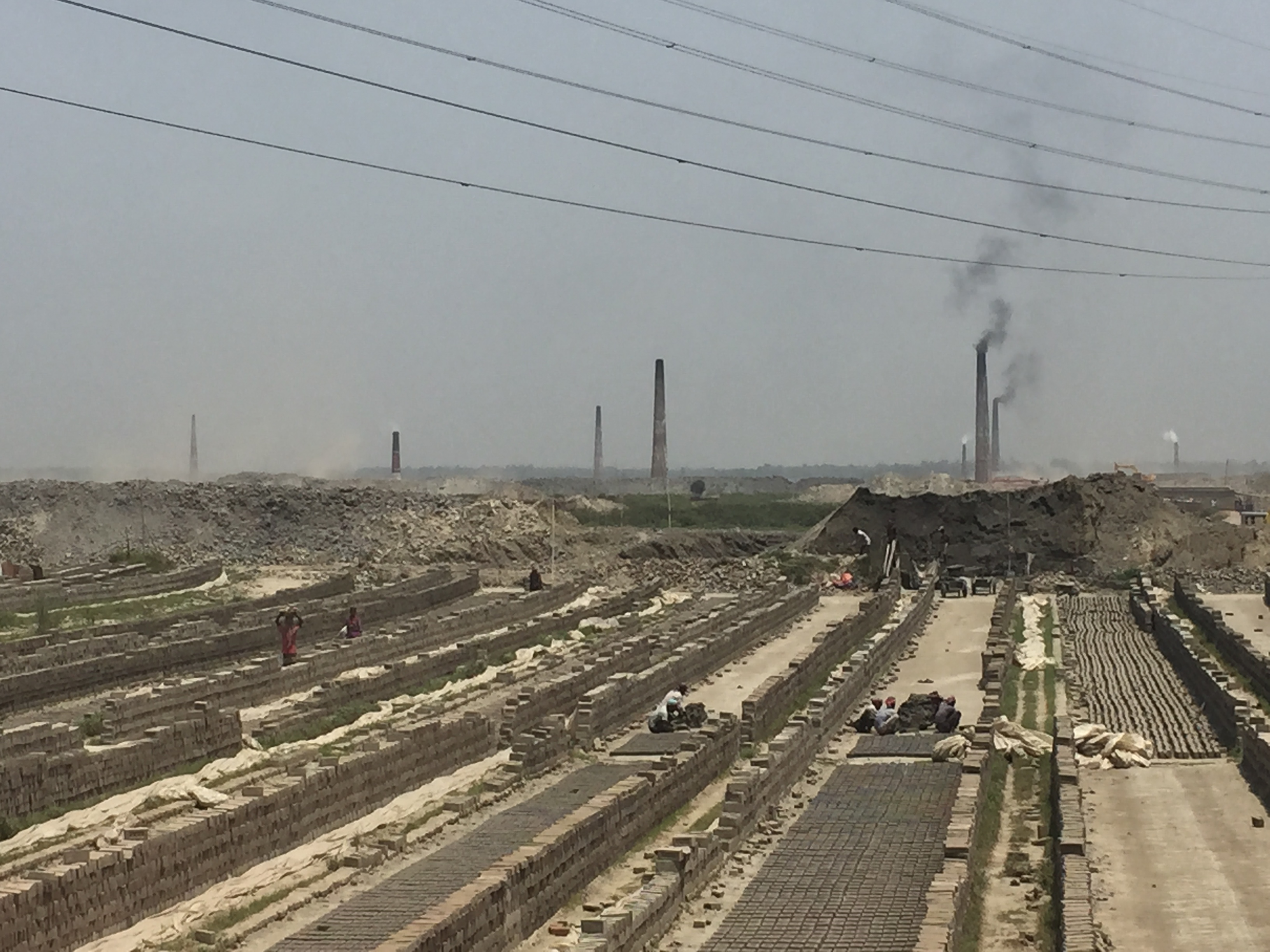 Brick making is a significant economic activity in Bangladesh. There are more than 5,000 operating kilns, contributing about 1 percent to the country’s gross domestic product (GDP) and employing an estimated one million people [pdf]. The sector is also an important source of livelihood for large numbers of rural poor during the dry summer months, when agriculture offers limited opportunities for income generation.

While the sector is important for Bangladesh’s economy, the brick industry is resource intensive and polluting, having significant social and environmental consequences. The industry is characterised by the use of outdated technologies, high emissions and the dominance of a single raw material (clay) and product (solid clay brick). Bangladesh currently produces [pdf] around 17 billion bricks per year, consuming around 45 million tonnes of fertile soil – equivalent to around 2,600 hectares of agricultural land. At this rate, the country is quickly moving towards severe food shortages in the foreseeable future. Apart from using soil, brick kilns burn nearly 3.5 million tons of coal and 1.9 million tons of wood annually in kilns with outmoded designs, causing severe air pollution. According to a study by the Bangladesh University of Engineering and Technology, almost 38 percent [pdf] of particulate matter pollution around Dhaka is attributable to brick kilns.

The Government of Bangladesh is trying to clamp down on the industry through regulations mandating the use of cleaner technologies. The most common but highly polluting Fixed Chimney Kilns (FCKs) are now gradually being converted to coal-based Zig Zag kilns and gas-based Hoffman kilns. However, the adoption of cleaner, gas-based technologies is hampered by a serious gas shortage, and the brick industry is expected to be a lower priority due to the seasonal nature of their operations. And although the available alternative technologies use relatively less energy, brick manufacturers are still faced with the problems of high local and global emissions, and the scarcity of raw material.

There are innovative technological options and policy measures that can partly address the issues faced by the Bangladesh brick industry. The FaL-G Brick (Fly ash-Lime-Gypsum) technology, invented and patented in India, could be one such solution. Though the technology was invented and patented by Dr. Bhanumathidas and Mr. N. Kalidas, given its potential for high environmental and social impacts, they are promoting the technology without invoking the patent.

Unlike clay bricks, the new technology completely eliminates the use of valuable top soil as raw material and fossil fuel. Instead, FaL-G bricks use fly ash, an unwanted residue from coal burning (mainly from coal-fired power plants). The fly ash is mixed with two other ingredients available as industrial byproducts: lime from the acetylene industry and gypsum from chemical plants. Putting these byproducts to productive use thus reduces water, air, and soil pollution.

Another important aspect of the FaL-G technology is that plants using it can operate throughout the year, unlike traditional coal-fired brick kilns that only operate for about six months. This implies that the workforce is employed for the whole year and does not have to search for other ways to earn a living during the monsoon season when coal-fired brick kilns close down. With year-round employment, the children of workers are able to attend school and do not end up working alongside their parents in kilns. By not using any fossil fuel, the FaL-G brick plants also provide a cleaner and healthier working environment for workers and their families.

Fly ash bricks are being promoted effectively as an alternative to burnt clay bricks in the construction sector in India. Fly ash bricks are gaining popularity amongst builders and engineers because of its high strength, reduced plastering costs, and reduced consumption of mortar [pdf]. The high compressive strength [pdf] of FaL-G bricks also eliminates breakage and thus waste during transport and handling.

In order to protect the environment, conserve top soil and prevent the dumping and disposal of fly ash generated from coal or lignite based thermal power plants, the Government of India restricts the excavation of top soil for manufacture of bricks and promotes the utilisation of fly ash in the manufacture of building materials and in construction activity within 100 kilometres of power plants.

The Government has also mandated thermal power plants to provide fly ash free to brick manufacturers, and stipulated time-bound targets to achieve high levels of ash utilisation. So far, proactive policy measures and technology support have had encouraging results: over 18,000 FaL-G brick plants are now in operation throughout India, accounting for around one sixth of India’s annual brick production and using over 25 million tons of fly ash.

Despite these results, the widespread scale-up of FaL-G brick technology, like any new technology, faces a number of challenges. Clay brick production continues to remain the preferred option for brick entrepreneurs as there are few incentives for them to innovate or modernise. To deal with these challenges, FaL-G entrepreneurs in India joined together as Fly Ash Brick and Block Manufacturers Federation (FABMAFED) in the hope that collective strength and a strong institutional backing will help tilt the political economy in favour of the environmentally-friendly brick technology.

Spreading the innovation in Bangladesh

Stakeholders in Bangladesh feel that the time is right to introduce FaL-G technology. The Government recently banned FCK technology, which is to be completely phased out by next year. At the same time, the Government of Bangladesh is commissioning a few large coal-based super thermal power plants to address the country’s energy security concerns. These thermal power plants will produce large quantities of fly ash, which will pose a major environmental concern in a few years. If technologies like FaL-G are promoted, the fly ash can be gainfully utilised to produce bricks of higher quality while saving forests and agricultural land, and preventing environmental pollution. With support from the UK Department for International Development (DFID), under their Knowledge Partnership Programme (KPP), which supports South-South knowledge transfer, the Institute for Industrial Productivity (IIP), a US-based NGO, has initiated work with the Bangladesh Department of Environment and the Bangladesh Brick Manufacturers Owners Association (BBMOA) to introduce and scale up this technology in Bangladesh.

As seen in India, successful scale up of the technology will need the involvement and support not just of the brick industry but other stakeholders, specifically policy makers. This will be particularly important for overcoming the barriers that FaL-G will face in replacing conventional and well-established kiln technologies. The Indian experience with FaL-G technology provides a lot of learning that can help shape favourable policies in Bangladesh, particularly in addressing the implementation challenges that are similar in both countries. Experience shows that scaling up such technologies requires both ‘supply side’ push through technology assistance, capacity building and government policies that incentivise the adoption of such technologies, as well as ‘demand side’ pull through, favourable, public procurement policy that promotes sourcing of resource-efficient bricks by construction companies, and through a well-designed awareness campaign for educating the public.

Ritu Bharadwaj is a Senior Program Manager for the Institute for Industrial Productivity (IIP), based in New Delhi. Somnath Bhattacharjee is IIP’s Country Director for India. (Conflict of interest declaration: the authors are managing the DFID-funded initiative to introduce and scale up the use of FaL-G technology).

Ritu Bharadwaj is a Senior Program Manager for the Institute for Industrial Productivity (IIP), based in New Delhi, India.

Somnath Bhattacharjee is the Institute for Industrial Productivity's Country Director for India.