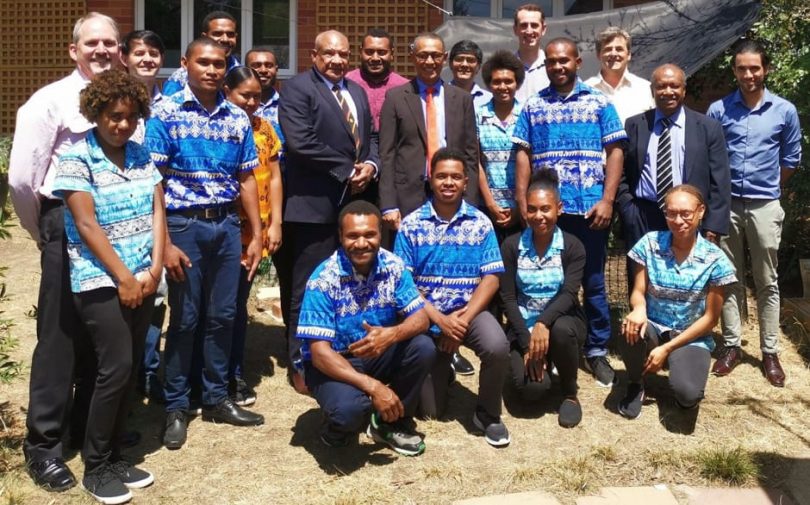 “Oh no! I am seriously going to die!”

That was what I was thinking as I was pulled under the pressure of the rushing river. I closed my eyes tightly and prayed to God for a miracle. Within a few seconds, a hand grabbed me by the wrist, and pulled me out of the water. Slowly I opened my eyes and realised that it was my big brother, Nathaniel. He had a big grin on his face, and was trying to hold back a giggle, as he took me to the bank of the river. He left me there, as he sprinted back and dove straight into the river with my cousins. I quietly sat on a stone next to the river, shivering with shock at what had just happened. I looked around and saw all my brothers, sisters and cousins laughing their hearts out at the fact that I almost drowned.

It was 2004, and my family and I were at my mum’s village in Jiwaka Province in the PNG Highlands. We went to the village because of a dispute of ownership of some land. The Highlands region is patrimonial so males own the land and is passed from father to son or a male relative. In Highlands society, males are treated with great respect, held in high regard and are considered the priority in everything. The land dispute was between my mother and my uncles. My uncles were trying to grab the land title from my mother, even though she had the legal right to the land. The community knew that my mother had made a payment to her father in exchange for the land. But my uncles were basing their claims on the cultural belief that women are ineligible to own land, and they wanted to take the land for themselves. It was a scary experience to witness how my uncles were being violent and causing chaos in the community, just to claim the land.

After several days, my mother was able to resolve the land dispute. It was during a Friday afternoon, as the air was getting cooler and the sun was slowly setting over the mountains, that I saw my Mum walking towards the house. “Ah!” my mum sighed as she walked in through the door, with a tired look on her face. She had been negotiating the land issue with the village chief and her brothers and had finally regained ownership of her land. She calmly looked at us as she sat next to my dad.

When my Mum had taken her seat, Dad told everyone to be quiet as he told a story of a land dispute in his family. Whereas my mum is from Jiwaka, my dad is from East New Britain. My grandfather (Dad’s father) grew up in a small family with an only brother, and his family owned a big plot of land in the village. When my grandfather passed away, one of his cousins, a female who lived a long way away, claimed and took ownership of my grandfather’s land. That story came as a shock to me, as I had never expected a women to be successful in claiming land.

I was about seven years old at that time. I looked at my dad curiously and asked how his aunt was able to claim the land. Without hesitation he started explaining. East New Britain is a matrilineal society, where females own land, are respected, held in high regard and have a greater influence in the community. My jaw dropped to the floor as I attentively listened to my dad, telling his story and explaining the difference between PNG’s patrilineal and matrilineal societies.

That story changed my perspective on how I view females. Growing up in a patrilineal society makes it challenging for females to recognise and acknowledge their own potential and capabilities. I am part Highlands, my parents worked and lived in and around the Highlands region, and I grew up being influenced by the Highlands region’s cultures and traditions. Being born and raised in the Highlands, I easily accepted the belief that men are superior and are capable of doing anything, while a women is ‘just a woman’, incapable of being as good as a male.

Learning about the different societies of PNG has helped me to realise that females have the ability to be as successful and influential as our male counterparts. And it has helped me recognise my own potential. I have the ability, skills, knowledge, support and potential to be whatever I want to be. And my success need not be limited by my gender.

This post is the first in a six-part series of personal reflections written by ANU-UPNG Summer School scholarship students. You can find the full series here.

Issabelle Vilau is studying Public Policy at the University of Papua New Guinea. She was one of ten students selected into the 2020 ANU-UPNG Summer School program.