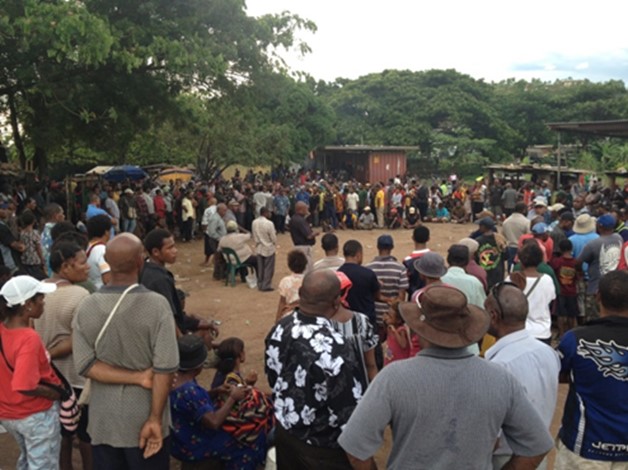 A mediation ceremony in a Port Moresby settlement in 2013, several months after a violent incident between two people from different ethnic groups (Credit: Michelle Rooney)

For most of us our raison d’etre for seeking to understand violence is the need for peace. If we understand violence then we can reduce it and thereby have peace. For many people working on the frontlines, it is not a career choice but a labour of love and life often unpaid or involving great sacrifice. PNG women like Dame Carol Kidu, the late Josepha Kiris, Ume Wainetti and many others have paved the way for legal reform, national action and policies like the recently approved National Strategy to Prevent and Respond to Gender Based Violence and the Sorcery National Action Plan. National actors, in partnership with development partners, have also been instrumental in paving the way for the emergence of new initiatives like the Family and Sexual Violence Action Committee, PNG’s first case management service Femili PNG, and much needed counselling services. Through these and other initiatives such as work in the Law and Justice sector, the next generation of actors are also being trained.

I proceed with deference to this extraordinary body of knowledge generated by scholars, national actors, and development partners leading action to reduce violence in PNG. This work unequivocally informs us that violence in PNG is multilayered, gendered, involves multiple actors, and is fast changing. It also counsels that there are no silver bullets, that our responses need to be multifaceted but may also have unintended consequences that may exacerbate violence.

Media narratives, often sensationalised and essentialised for Western audiences, mask the breathtaking diversity, breadth and the depth of issues that the term ‘violence in PNG’ canvases.

For example, media reports that cite the statistic ‘2/3 of PNG women have experienced some form of violence in their lifetime’ paint the majority of PNG women as victims rather than as remarkably resilient and vulnerable at the same time, actors seeking to secure themselves while simultaneously being the vanguards of peace in their families and communities. Another typical headline ‘Why is Papua New Guinea still hunting witches?’ reinforces the demonization of particular women and community responses yet tends to fall short of explaining why this phenomenon appears to be spreading. With among the highest homicide rates in the world, the lawlessness and crime in two of PNG’s largest urban centres, Port Moresby and Lae, rank them among the least liveable places on earth. The human cost of ongoing tribal warfare exacerbated by the proliferation of modern arms in the Highlands Region cuts across all aspects of daily life. Such entrenched ethnic-based conflicts extend their tentacles to the urban setting where ethnic violence engenders collective security at the cost of subjugating action on domestic violence. Election-related violence and contestation of resources are often resolved through violent means. The images of bashed up asylum seekers on Manus Island reinforce the demonization and marginalisation of Papua New Guinean men.

We have come to take for granted these portrayals of a violent PNG.

Oversimplified narratives of violence carry the risk of conflating different phenomena. For example, work on gender based violence may conflate domestic family violence with sorcery related violence targeting women. These are extremely different phenomena requiring different solutions. In the case of sorcery, Miranda Forsyth and Richard Eves highlight the complicated legal issues and that ‘understandings about what the actual problems are differ widely depending upon the world view of the person concerned’ (p. 2). How do we reconcile a community’s sense of security (that they feel threatened by a woman they believe to be a sorcerer) with the worldview of those trying to measure SDG16.1.4, which seeks to measure the proportion of people who feel safe walking alone in their neighbourhood?

Nor are formal laws and institutions a simple answer. The entanglements between Western laws and customary norms mean that families trying to address domestic violence must navigate complex webs of jurisdictions and actors. See here for a discussion on some of these complexities. Or, as Christine Stewart’s research shows, formal laws can work to reinforce violence against those whose choices on consensual sex – prostitutes and homosexuals – are deemed criminal acts under PNG law.

Understandings of security in the PNG context diverge significantly from Western notions of security. In PNG, belonging to social and ethnic groups are important for security. The nuances and cross-cutting nature of this can be seen in Vicki Luker and Sinclair Dinnen’s edited collection of papers in Civic Insecurity: Law, Order and HIV in Papua New Guinea. How do we reconcile inter-ethnic violence that engenders collective security with policing when the police lack capacity or are non-existent? Where they exist, police often deploy their monopoly power on violence in ways that violate human rights. Stephanie Lusby’s research shows that the formal and male dominated security industry can work to reinforce gender based violence.

To conclude, I draw your attention to Aletta Biersak, Margaret Jolly, and Martha Macintyre’s edited collection on Gender Violence and Human Rights in the Western Pacific. Inspired by Sally Engle Merry’s work on Human Rights and Gender Violence, and ‘translation’ and ‘venacularisation’ the authors examine the interface between universal human rights regimes, from which the SDGs (particularly SDG16) emerge, and local understandings and responses to gender based violence in the Western Pacific. Amongst an immensely rich terrain of issues, the collection reminds us of the contradictions inherent in universal concepts of human rights. For example, on the one hand, universal human rights concepts are based on universal rights and equality of persons. On the other hand, they promote cultural diversity. These contradictions raise questions like whether there can be ‘universal’ human rights. Or, as Margaret Jolly discusses in the conclusion, what do universal human rights mean when notions of individualism and personhood change alongside PNG’s rapid social transformation?

If violence is so expansive and complex. If violence has multiple faces each wearing multiple masks evading our search to understand it. If violence can conceal itself within the world views of communities to provide them clear logics to harm their own. If violence has such power and agency, then surely the same must be said of the dynamics of peace – our raison d’etre – for understanding violence.

This blog only touches the surface of the wealth of scholarship and nationally produced knowledge on the complexities of violence to highlight the challenges of applying universal measures of peace to the PNG context. Nonetheless, PNG is a signatory to these universal goals and has an obligation to both its citizens and the international community to measure progress towards the goals. The work being undertaken by the Institute of Economics and Peace on ‘Measuring Peace in the Pacific’ is an important start and should complement these existing works. It is also an opportunity to acknowledge important work being undertaken to achieve peace and security in PNG. After all, as this study by David Craig, Doug Porter, and Fiona Hukula shows, Papua New Guineans work every day to make their communities safer places.

This is an edited version of a talk given at the launch of the Institute for Economics and Peace report ‘Measuring Peace in the Pacific’ on 1 February 2018.