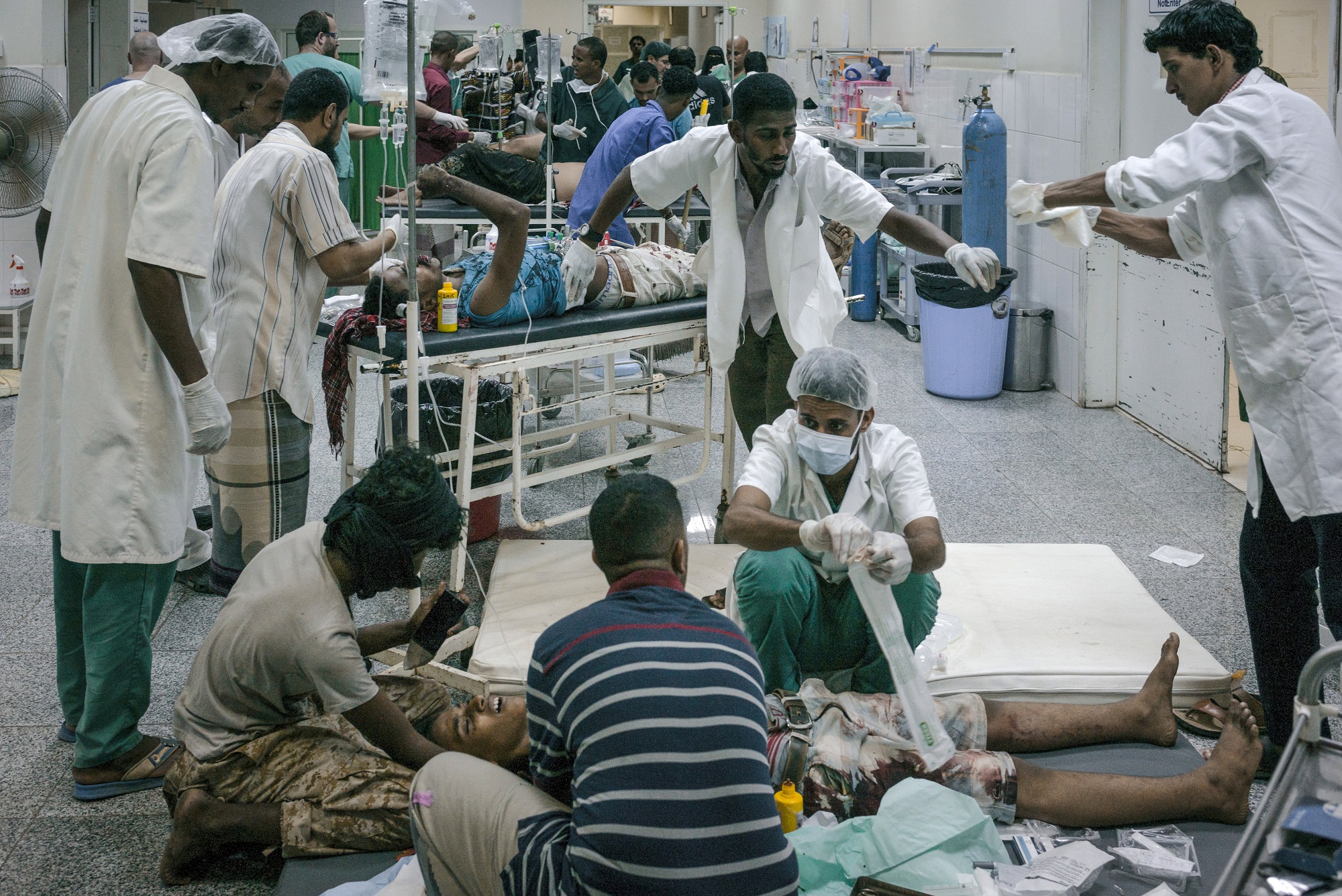 As the World Humanitarian Summit draws closer, the failures of the global humanitarian system that the summit seeks to revitalise are highlighted more strongly each week in war-torn Yemen.

Médecins Sans Frontières (MSF) Head of Mission in Yemen, Hassan Boucenine, recently characterised the situation in the country, saying: “To be honest it’s worse and worse… it’s beyond despair… They struck a wedding, there were only civilians there and most of them died because the Mokha hospital is closed because of supply — no drugs, no fuel, no electricity, no nothing, so the staff left.”

It is not hard to understand his description. Many thousands of Yemenis are being killed and injured as the conflict drags into its eighth month. Over 13,000 people have been treated by MSF medical teams working on both sides of the front lines. The situation is not improving. The calls for ceasefires and peace talks have been all but ignored, despite the death toll from the past seven months matching or even surpassing that seen in Syria during the same period.

Very few Australians have been following the devastating war in Yemen. It is not easy to do. Newscasts rarely carry the story as the Yemen conflict is simply not a geopolitical priority here. It does not directly threaten the national interests of Australia, or seemingly those of its allies and our ties to the Arabian nation are very limited. That said, it is one of the greatest humanitarian crisis of our times, and one where the very lack of attention given in Australia is symptomatic of some of the broader problems facing Yemen, and in fact the humanitarian aid system itself. Before we examine this and the questions this raises for humanitarian decision makers it’s worth recapping the context.

Yemen is currently divided between the Houthi movement, which controls substantial parts of the north and is advancing southwards, and the anti-Houthi coalition based mainly in the south. President Hadi of the transitional government (set up after widespread protests pushed the previous president Saleh to step down) left Yemen at the end of March 2015 when the Saleh-supported Houthi consolidated their power in the capital Sana’a and moved to take the southern city of Aden. A coalition of gulf states supporting President Hadi, led by Saudi Arabia, started airstrikes against the Houthis on 27 March 2015.

The last few months have seen a sustained worsening of the situation for civilians in Yemen. Forces on both sides of the conflict have frequently struck civilian targets. The Saudi led coalition attacks in Harad in April and in Beni Hassan-Harad in July, left dozens dead and injured over 100 more. Houthi shelling in June at Al-Basateen-Aden and in Dar Saad-Aden in July left hundreds more injured. The total number of civilians killed and injured is in dispute but what is not contested is that the number is high – perhaps higher than the civilian death toll in Syria during the same period. Further to this, 1.5 million people are displaced and almost 9 million lack access to even basic medical care.

The conflict in Yemen has not been ignored by the international community – quite the opposite. The UN Security Council (UNSC) debated the conflict on numerous occasions and passed UNSC resolution 2216 (in April 2015), which was the latest in a series of resolutions relating to Yemen. It seeks to limit arms flows to Houthi rebels amongst other sanctions. Tragically this resolution has, in the experience of MSF teams, done little to limit the scale or impact of the conflict. It has instead emboldened the Saudi led coalition’s imposition of a blockade of Yemeni ports and the targeting of local infrastructure that has crippled the lives of ordinary Yemenis. Supplies are hard to get in, whilst basic essentials such as fuel, electricity, food and materials are scarce. It has also led to the collapse of many health structures for lack of life saving medical supplies and the equipment and power to operate with.

This is yet to materialise. As of mid-September, the UN $1.6 billion response plan was only 38 per cent funded. At the same time MSF teams report a near-absence of implementing humanitarian agencies on the ground. This is clearly a difficult context to operate in, but for the humanitarian sector a crisis of this scale should be far more difficult to ignore.

For those like MSF who are on the ground, the provision of independent, impartial, humanitarian assistance is severely hampered by cumbersome processes, efforts to influence and enforce where assistance is provided, and blockage and confiscation of humanitarian supplies. Both warring parties in Yemen seek to control the meagre humanitarian resources available in the areas they control, and they do this with impunity.

The global humanitarian system is tragically failing the people of Yemen, because it remains vulnerable to the political motives of UN member states, donor governments, and warring parties. Unfortunately for Yemenis their country is neither important enough to galvanise decisive international humanitarian action (and have their plight televised on the nightly news) nor geopolitically sensitive enough to mobilise effective international pressure to swiftly end hostilities and resume basic services.

Expectations that the World Humanitarian Summit will offer new and stronger direction during humanitarian emergencies are also fading fast. The Summit has not managed to propose any meaningful reform of the current aid system architecture, and has only tentatively started to address financing issues. A focus on the localisation of aid seems absurdly out of place among the horrific realities of daily life in Yemen. Nation-states along with the private humanitarian sector need to institutionalise and resource humanitarian mechanisms which can independently act to avert humanitarian crises such as we witness in Yemen. Only humanitarian mechanisms which are well resourced, swift and easily adaptable can have an effective presence on the ground, and only then if determined political protection from the international community and all warring parties is secured under International Humanitarian Law.

This will not happen in time to save Yemen. Short-term relief depends on the determination of the small number of humanitarian actors in the field, whilst responsibility rests with the UNSC and all states who are party to the conflict to put the humanitarian crisis at the top of the agenda. What is desperately needed is an end to the blockade, restoring of essential services and humanitarian access.

Note: On the 26 October, airstrikes carried out by the Saudi-led coalition in northern Yemen destroyed a hospital supported by MSF. The small hospital, in the Haydan district in Saada Province, was hit by several airstrikes beginning at 10:30pm. Hospital staff and two patients managed to escape before subsequent airstrikes occurred over a two hour period. With the hospital destroyed, at least 200,000 people now have no access to lifesaving medical care. The bombing of civilians and hospitals is a violation of IHL and MSF is demanding that coalition forces explain the circumstances around the attack in Haydan.