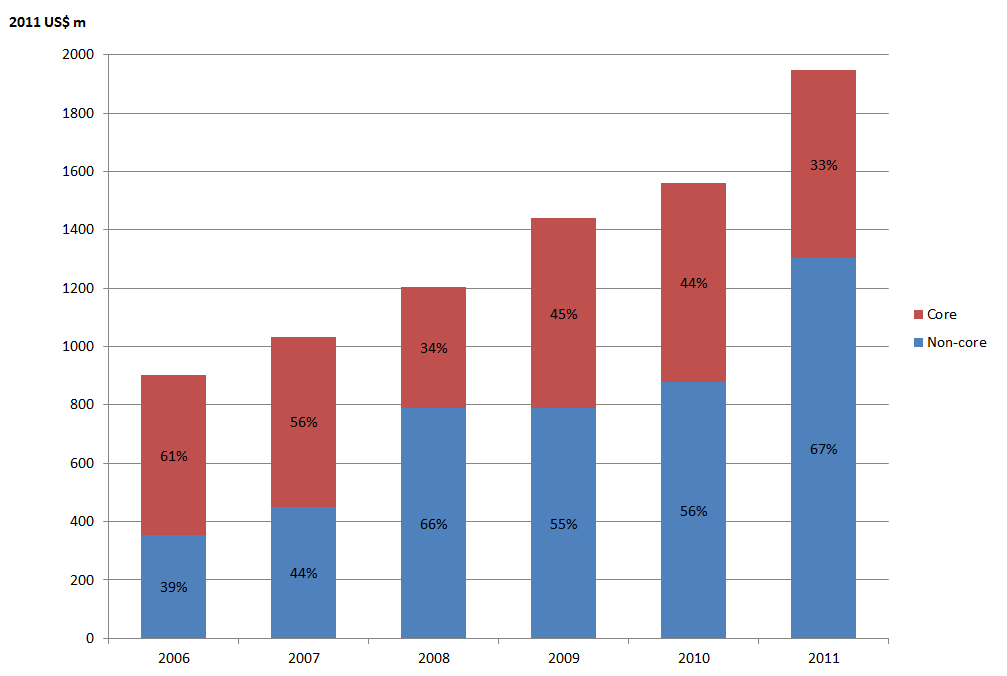 Despite the fact that cuts to multilaterals were not mentioned in Hockey’s written statement, or in the Coalition’s foreign affairs policy document, we can assume that some cuts to international organisations are on the way. Given that, what principles should guide the government in reducing the budget provided to such organisations?

In addition to this figure, however, a substantial amount of funding is directed to multilateral organisations for specified purposes, including at the country level. According to the OECD, in 2011 Australia contributed US$645 million in core funding to multilaterals and an additional US$1,302 million in non-core funding through country programs. This is the most recent year for which data is available from the OECD DAC database, but we can assume that a considerable sum is still directed to multilaterals in this way. The trend over the past few years has been for a higher percentage of multilateral aid to be non-core. Some agencies receive the lion’s share of their funding in this form: in 2010, UNICEF received US$23 million in core funding from Australia and an additional US$103 million in non-core funding. This type of multilateral funding is presumably in the cross-hairs for cuts as well.

Multilateral ODA from Australia in constant US$

If the new government keeps its commitment to the $656 million cut this financial year, then eliminating large parts of the multilateral budget would be one swift way to go. That is obviously unlikely (and likely impossible given signed agreements and other hard commitments).

So how should the Australian government think about reducing multilateral spending?

In 2012 the former Australian government commissioned the first ever assessment of the effectiveness and relevance of multilateral organisations, creatively titled the Australian Multilateral Assessment (AMA). It assessed each of the major international organisations – both those currently funded by AusAID and those to which Australia was considering commencing funding – against a range of criteria including delivering results, alignment with Australia’s aid priorities and national interests, contribution to the wider multilateral development system, and organisational behaviour.

While it would be naïve to assume that the AMA is the only source of information for decision-making on multilateral spending, the 2013-14 aid budget paper (the ‘blue book’) confirms that “the AMA and scorecard findings influenced funding decisions regarding Australia’s multilateral partners in the 2013-14 Budget.” Therefore, some further investigation of the results is warranted.

The AMA provides a score on two axes: results/relevance and organisational behaviour. While they do not provide specific scores, utilising their summary figure, a score can be estimated for each axis along with a composite score derived by multiplying the two scores together (note – only selected organisations are shown here due to space limitations): 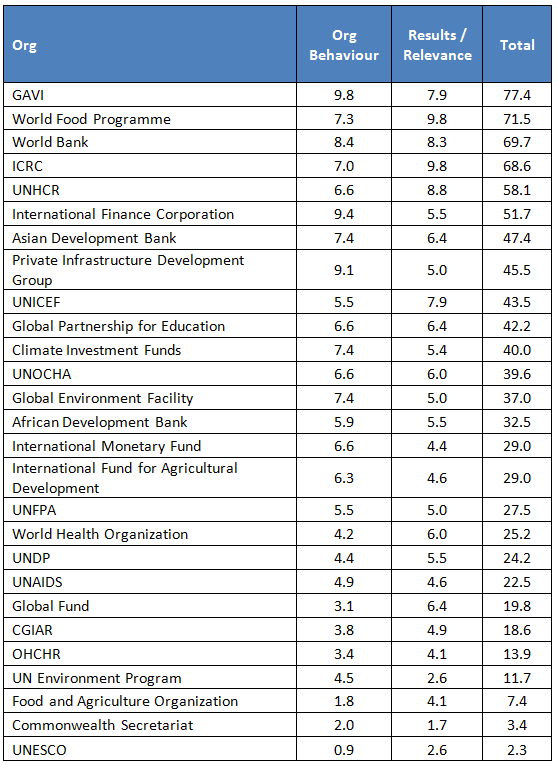 Not surprisingly, some of the most favourably assessed performers in the multilateral system get substantial amounts of core funding from Australia (funding figures for 2013-14 are not available for all organisations). Australia has committed $200 million to GAVI from 2011 to 2013 and, pursuant to past replenishment commitments, allocated more than $200 million to the World Bank in the 2013-14 budget alone. The Asian Development Bank was allocated more than $100 million and the World Food Programme $46 million. On the other hand, some of the less favourably assessed organisations also received non-trivial allocations of funding including $12 million for the Commonwealth Secretariat, $23.4 million for the WHO and $26 million for UNDP (again excluding non-core funding).

The reality however is that those organisations most likely to see cuts, such as UNESCO and FAO, already receive very small amounts of funding (if any). Funding for global environment programs was already cut in the 2013 budget from $74 million in 2012-13 to $1.5 million in 2013-14. Even cutting all funding to a number of the UN development agencies (UNDP, UNAIDS, WHO, etc.) would save only $141 million in core funding (though possibly an additional $200 million or more in non-core funding). While I personally agree that many UN agencies are often very inefficient and undeserving of considerable support, it is not a great look for a new government to take a hatchet to all UN agency funding.

In order to substantially reduce overall contributions to multilaterals, the Australian government will need to take a close look at its support for the Global Fund (see more about the government’s recent funding announcement here), GAVI, WFP and the development banks. The Global Fund to Fight AIDS, TB and Malaria fared poorly in the AMA yet, by most accounts, its systems, transparency and results have improved under the new directorship of Mark Dybul. It is no coincidence that with the recent pledging conference for funding commitments for the 2014 to 2016 period, Dr Dybul has come to Australia twice in 2013.

Given the Coalition’s emphasis on economic development, would they reconsider the roughly $200 million provided to the World Bank and the $100 million provided to the Asian Development Bank annually? Even if they do, these contributions are very difficult to cut in short order because they represent payments made against legally binding promises from past replenishment rounds.

Another possible area to cut is multilateral funding to humanitarian organisations. WFP, the ICRC and UNHCR combined receive almost $100 million per year (and perhaps double that if the ratio of core to non-core funding is as it was in 2010). But they also hold three of the top five positions in the AMA rankings so cuts to those organisations could not be justified on effectiveness grounds.

Cuts to the Global Fund, GAVI and the Global Partnership for Education might be most feasible (especially for the Global Fund and GAVI for which commitments were made through to the end of 2013 only). But the impact on the poorest people in the world will be substantial in the form of fewer bednets, fewer children immunised and fewer children in school. The public outcry could be very considerable, and cuts to these funds would attract a great deal of international attention in the year in which Australia takes the G20 reins.

In sum, substantial cuts to the multilateral aid budget could require some tough decisions that will be unpalatable to many. There will likely be some cuts to the worst performing multilaterals that Australia has continued to fund, but that will yield only relatively modest savings. Perhaps a directive to country programs to reduce the amounts that they direct through multilaterals might help, though this would be a rather random policy. Contributions to top-performing and well supported organisations such as GAVI and WFP should be retained.

It’s worth noting that there’s one source of extremely low-hanging savings. We can quite confidently conclude that Australia will not be joining any new multilateral organisations over the coming few years; membership of the African Development Bank and IFAD, which was being pursued with vigour by Labor, is assuredly now off the table. The costs of joining those organisations were likely included in spending plans for 2014-15 and beyond. Thus the government could justifiably argue that scrapping Labor’s plans represents a saving for future years. Confirming that Australia will not join the African Development Bank and IFAD could allow Hockey to save face by cutting future multilateral spending forecasts without having to make major cuts to existing, highly effective programs.