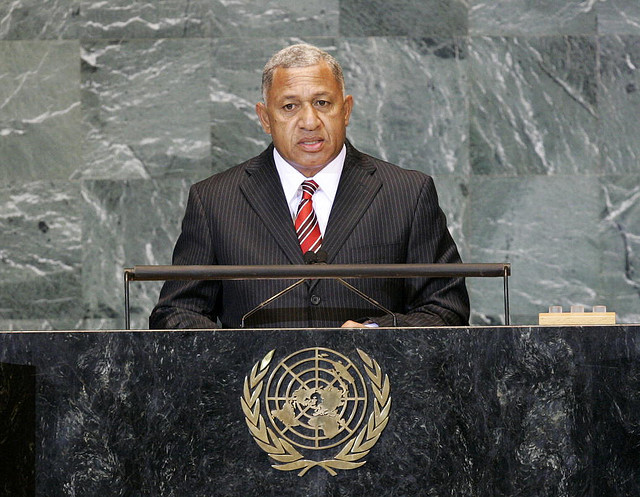 Fiji’s coup leader-turned Prime Minister Frank Bainimarama may star on the international stage, where many diplomats take at face value his reformist claims, but his fortunes are more troubled at home.

Overseas, he has become chair of the Group of 77, a UN gathering of developing countries, and he heads the London-based International Sugar Organization.

Last week, Fiji hosted the inaugural meeting of the Pacific Islands Development Forum (PIDF), a new organization separate from the longstanding Pacific Islands Forum (PIF), in which Australia and New Zealand are powerful members but from which Fiji was expelled in 2009.

At the Nadi PIDF summit, Mr Bainimarama — who doubles as commander of the Republic of Fiji Military Forces — criticized the PIF on account of its ‘army of overpaid officials’ and ‘top down solutions’. He described his new rival Suva-based organization as the ‘antithesis of most bureaucracies’.

Over the past eighteen months, Fiji has established embassies in United Arab Emirates, South Africa, South Korea, Brazil, and Indonesia, and courted diplomats from Russia, Georgia and most importantly China and India.

Bainimarama’s newfound success in the international arena stands in stark contrast to his performance a few years ago, when the region’s states unanimously condemned his December 2006 coup.

In 2008, Bainimarama was widely criticized for breaching a promise of elections. Despite that setback, not only Australia and New Zealand, but also the European Union, sought to keep the channels open hoping that public emergency regulations would be lifted and for a credible roadmap towards elections.

Instead, when the courts ruled Bainimarama’s government illegal in April 2009, he chose to ditch the constitution. Ever since, Fiji has been ruled by decree. Media censorship has been imposed, and the Bainimarama government has gradually silenced its opponents.

In the build up to Australia’s September election, shadow foreign minister Julie Bishop has promised to ‘rebuild the bridges’ and ‘normalise relations’. Her ‘pledge’ of support ‘in whatever form Fiji requires’ was saluted by Gerald McGhie, writing in the Dominion Post (6/8) as entailing a welcome break from the policies of Kevin Rudd, described as the ‘poster boy for a hardline approach to Fiji since the coup in 2006’.

Yet it was Bishop’s Liberal Party that was in office when Bainimarama seized power in 2006. It was then Prime Minister John Howard who initiated the so-called ‘hardline’ policy towards Fiji. And a strange sort of ‘hardline’ policy it was; for it included neither trade sanctions nor severe cuts in aid. And it was accompanied by a large boom in Australian tourists visiting Fiji, which kept this Pacific state afloat over the years since the coup despite the collapse of the once critical sugar industry.

Much of the contemporary discussion about foreign policy towards Fiji pays no attention to major policy shifts over the last few years. In 2011, the Australian government announced a doubling of its aid towards Fiji (from A$18.6 million in 2011-12 up to A$36 million by 2013-14 or A$56 million including aid via multilateral organizations). In 2012, Kevin Rudd dropped objections to Fiji troops serving on UN peacekeeping missions, paving the way for a new deployment to the Golan Heights. Travel bans have also been steadily eased, both by Canberra and Wellington.

Julie Bishop’s 29 July speech might be depicted as a dramatic breakthrough in some quarters, but in fact it entailed little new: there may have been a ‘pledge’ to be ‘guided by the Fijian government’ as regards aid policy, but this is nevertheless (as with the Rudd government) intended as assistance ‘on the path to parliamentary democracy and constitutional law and rule’.

Despite the concessions, the Fiji interim government has refused the appointment of new high commissioners, either from Australia or New Zealand. Diplomats unfamiliar with the situation inside Fiji are quietly baffled: the normal Queensbury rules of give and take in international diplomacy seem to have been breached. Antipodean diplomats and think tanks keep proposing various shifts in policy settings in the hope of some reciprocal concessions, but find themselves instead repeatedly rebuffed by the recalcitrant military leader.

For several years now, Bainimarama has sought to strengthen his domestic and regional position by taking a belligerent attitude towards the region’s bigger powers. Bainimarama has galvanized political support through anti-Australianism, and so cannot reciprocate any toning down of former hostilities (as Ms Bishop will perhaps soon also find).

For that reason, not only will a policy of easing pressure on Bainimarama fail. So too would efforts to crank up the pressure, and ‘put the heat on’ Bainimarama (as the Wellington-based Dominion-Post wrongly headlined a shorter version of this article). Such approaches, at this stage, would only assist Bainimarama’s domestic and regional political consolidation.

While starved of legitimacy at home, Bainimarama enjoys being able to strut on the international stage as the plucky Pacific Islands strong man willing to stand up to the region’s bigger powers. Neighbouring countries like Papua New Guinea, Solomon Islands and Vanuatu have shown sympathy for Bainimarama’s use of the Melanesian Spearhead Group as a platform to criticize Australian heavy-handedness.

Bainimarama’s success at courting international allies also stands in sharp contrast to his poor ability to sustain coalitions on the domestic front. At home, his cabinet consists of several military officers, a few tired veterans of the 1987 coup, and hyperactive Attorney General Aiyaz Sayed-Khaiyum, who has no electoral base. Many of those political leaders who originally rallied to Bainimarama have fallen by the wayside, and are now nursing their wounds ahead of the scheduled 2014 elections.

While Bainimarama grandstands on the international stage — where many diplomats take at face value his claims about reform, anti-corruption and tackling long-run ethnic frictions — he shows little sign of having the acumen to deal with the protracted constitutional crisis he has inflicted upon Fiji.

Only in December, he ditched the report of a constitutional review commission that his own government had appointed. The reason was that the commission had prepared a draft that would have entailed the interim government surrendering power ahead of the next elections. Instead, Mr Sayed-Khaiyum produced a new draft that allows the government to remain in office up to the first sitting of the new parliament.

Much of the foreign policy discourse treats bilateral relations as if these were the key driver of developments within Fiji. In fact, foreign policy issues play a poor second fiddle to the domestic impasse. And here, there are good reasons to be worried. There is no sign of Bainimarama being ready or able to forge the political party that he needs to contest the election promised for 2014 (which he clearly expects to win). Nor is there much sign that he is willing to concede defeat should the result go against him. When the court ruling went against him in 2009, Bainimarama lost no time before destroying the old legal order.

In such a context, there is little to be gained by resurrecting a game of reciprocal diplomatic concessions in the hope of short-run gains for New Zealand (such as Gerald McGhie’s hoped-for vote for a New Zealand seat on the UN Security Council).

Far better to take the longer-run view, watch progress carefully on the domestic front, and keep up pressure against harassment of Fiji’s opposition parties, trades unions, and civil society activists. Above all, the focus should be on ensuring that the next elections enable the people of Fiji to regain the right — denied to them over the past seven years — to select their own government.

Jon Fraenkel is a Professor of Comparative Politics at Victoria University of Wellington. He was co-editor of From Election to Coup in Fiji; The 2006 campaign and its Aftermath (2007) and The 2006 Military takeover in Fiji: A Coup to End all Coups? (2009).