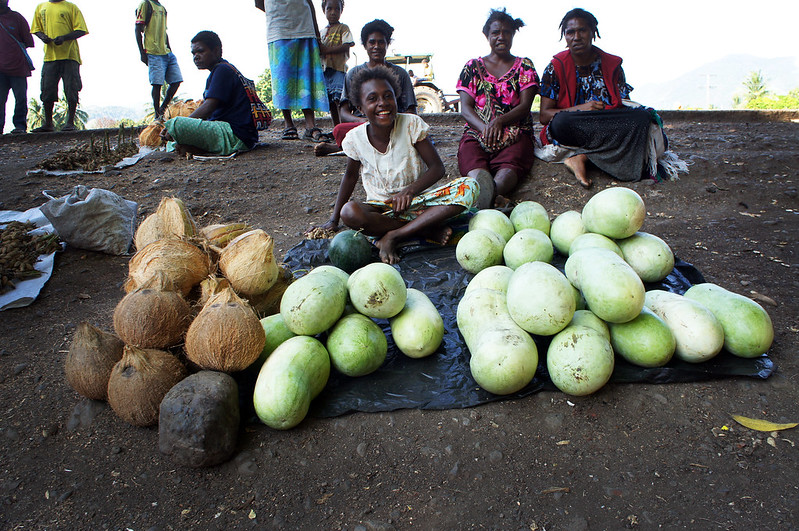 The socio-economic impacts of COVID-19 are devastating communities in the Pacific and Timor-Leste as much as the virus itself, and sometimes to an even greater extent.

World Vision surveyed 752 households (with an average of six people per household) in Papua New Guinea, Solomon Islands, Timor-Leste and Vanuatu in late 2020 to better understand the secondary impacts of the pandemic at the community level. The sample size was relatively small (because the survey was done in an emergency context under government restrictions), but still the results provide a valuable insight into the deep and sometimes unexpected knock-on effects of COVID-19 in the region.

Unsurprisingly, loss of livelihoods was the number one concern for the households surveyed. Almost 60% of respondents had either lost their job, lost income, or resorted to alternative sources of income due to the economic impacts of the pandemic. The top five reasons cited by households for this loss of income were reduced demand for goods/services (29%), closed markets (20%), lack of access to livelihood inputs such as seeds and materials (18%), movement restrictions (15%), and transport limitations (10%).

These disruptions are crippling the same industries that are the traditional drivers of Pacific economies – tourism, agriculture, small- and medium-sized business and money sent home by seasonal workers. Street vendors and farmers have been the hardest hit, with 56% of vendors and 55% of agriculture and livestock workers saying their work was fully or severely affected by the pandemic in the two weeks before the survey. 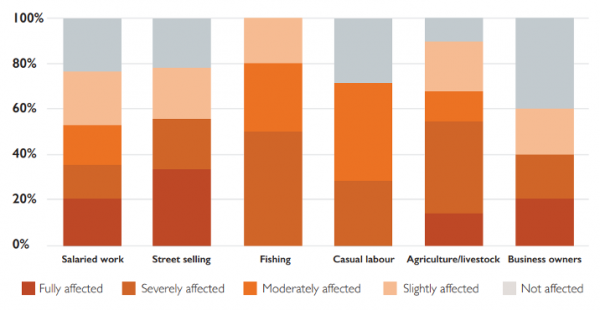 This data is consistent with concerns raised by the Lowy Institute that the Pacific has been particularly battered by the economic fallout of COVID-19 and that it could face a potential ‘lost decade’ of economic progress as a result. On current projections, average income per person in the Pacific will not recover to 2019 levels until 2028 unless a multi-year recovery package is urgently adopted.

Loss of livelihoods isn’t just affecting consumer activity; it is having significant ripple effects across Pacific societies. The ‘Pacific Aftershocks’ survey revealed the cruel choices families are forced to make as their incomes collapse, with households resorting to selling assets and even skipping meals to cope:

With tourism expected to be one of the last sectors to recover from the pandemic, there is a real risk that the Pacific could face its own version of ‘long COVID’ – a protracted, slow climb back to economic normality over the next decade, during which the socio-economic impacts above could become a type of ‘new normal.’ But this doesn’t have to be the case.

In the short-term (during the next six months), work is needed to urgently scale up social protection measures (such as cash and voucher assistance and, where this is not possible, food assistance) to help poor families with disrupted incomes meet their immediate needs. In many contexts across the Pacific region, assistance in the form of cash and vouchers minimises the distortion to markets while ensuring families do not resort to negative coping mechanisms such as eating less or forcing their children to work.

To build back better in the medium and longer-term (the next one to five years), a suite of initiatives should be deployed to stimulate the Pacific economy and rebuild livelihoods. This could include improving access to finance for small businesses, strengthening market systems so they work better for the poor, investing in women’s economic empowerment, and restoring environments through low-cost regenerative agriculture. As a mechanism to coordinate and drive this work, it is recommended all national and donor governments in the Pacific region, including Australia, work together to develop an Economic Recovery Compact – a roadmap to rebuild the regional economy in a way that leaves no one behind. By rebuilding livelihoods, starting at the bottom of the economic pyramid, donor and national governments can increase productive capacity, broaden the consumer base, and build resilience across the market system, all while supporting those who need it most.

Just as regional governments worked together to establish the Pacific Humanitarian Pathway on COVID-19, the region should again coalesce around the longer-term recovery effort – because a regional crisis like this requires a regional response.

For more information, see World Vision’s report Pacific Aftershocks: Unmasking the impact of COVID-19 on lives and livelihoods in the Pacific and Timor-Leste.

Jonathon Gurry is World Vision Australia’s senior policy advisor, leading policy development on livelihoods, food security and climate change. He is a former lawyer with many years of international experience in the aid and development sector.