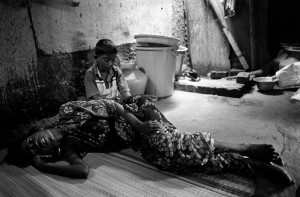 In the quiet lobby of the School of International and Public Affairs at Columbia University, the outcome of a ten year project was recently on display. ‘Revisited’ is an exhibition by the world-renowned photographer Nick Danziger. Commissioned by World Vision in 2005, Danziger’s brief was to see what effect the Millennium Development Goals were having on the lives of poor and vulnerable people in eight countries across the world. Set out in groups of three, sorted by country, the photographs take us into these lives for a moment in 2005, then in 2010, and finally in 2015. The effect is immediate, and compelling.

Far from the press conferences, festivities and fanfare that characterised the Sustainable Development Summit, Danziger’s work depicts an endless struggle against poverty, hunger, disease and exclusion. As organisations and agencies ready themselves for a new development agenda, in which they have pledged to leave no-one behind, this exhibition serves as a modest reminder that ending global poverty will mean reaching those people living at the very margins of society.

‘Revisited’ takes us to Armenia, Bolivia, Cambodia, Honduras, India, Niger, Uganda and Zambia. In India, one of the lives we glance at through Danziger’s lens is that of Ajid Kumar. In 2005, he is eight years old and his sister Kousalya is six. Both his mother Selvi and father Mohan have AIDS, and Selvi is dying from it. Mohan is a wage labourer. Ajid Kumar runs errands for a shop. They live on the street while renting their shanty home for US$3.40 a month. 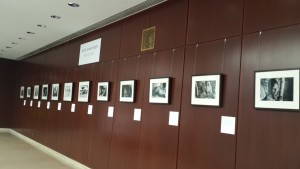 By 2010, Selvi has passed away. Mohan, who had previously left the family, has returned and is faced with the unimaginable dilemma of how to pay for his antiretroviral treatment and feed himself and his children: “I can’t take it as I don’t have enough money to eat regularly. I have to decide whether to feed my children or myself to prolong my life to help them.”

Five years later, Ajid Kumar is 18, Kousalya is 17 and Mohan is still alive. Ajid Kumar, his pregnant wife and her brother live with Mohan, along with a woman named Lakshmi. Their home is roofed with a tarpaulin and fits them at night if all five sleep side by side. Kousalya lives elsewhere, working as a nanny. She’s happier where she is, saying that during visits home she is always hungry.

What will the next five years hold? Mohan tells Danziger: “I don’t dream anymore. My only hope is that my children will be happy, and that one day my daughter Kousalya will also marry.”

One can only wonder whether Ajid Kumar still dreams. Can the SDGs do for his unborn child what the MDGs could not do for Ajid Kumar? Can the SDGs ensure that nobody is left behind?

It is an ambitious agenda, even for India, on which many hopes are pinned in terms of the achievement of the new goals. In a thoughtful article on what poverty eradication means according to the new framework, David Hulme tells us that in contrast to the MDGs, success for the new goals will be “less about targeting a particular measure of poverty and more about changing values nationally and internationally.” This is similar to a point that Joseph Stiglitz made in mid-September, when he described the SDGs as important because they are “norm-setting”, and are establishing standards to which everybody – governments and society as a whole – should aspire to and adhere.

These are sentiments echoed in the introductory text to the Revisited exhibition, which encourages visitors to look at the world in a common context, as a “family of man”, and in this way to become both more humane and help to change the future for the almost one billion people that continue to live below the global poverty line.

The Revisited exhibition ran from 15 September to 15 October 2015 at the School of International and Public Affairs, and the Italian Academy for Advanced Studies in America, Columbia University, New York. More information about the exhibition is available here. Photographs and stories from the exhibition are available online here.