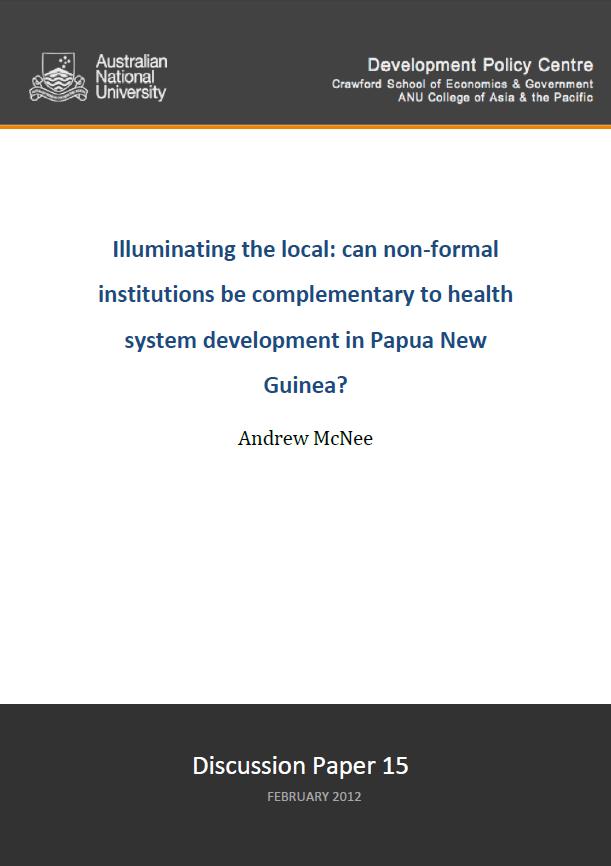 About 12 months ago, Mr Wep Kanawi (Director of the PNG National AIDS Council) told a story about health in Papua New Guinea.  He was talking to a symposium at Deakin University on the present and future of PNG (see here).

His story however was as much about the past, as it was about the future.

His story intersected the lived experience of three people.  His mother, who had lived her 90 years in the village in Manus, with only the lightest of touches of the formal health services (twice in her life had she been to a health clinic); his Port Moresby based daughter who was a heavy user of health services; and that of himself as a senior Administrator for over 40 years who had witnessed, and attempted to interpret, the various manifestations of the PNG health system over that time.

All three perspectives were illuminating.

The heart of his story was about spheres of health action in PNG that have never really connected.

His Port Moresby based daughter appears to be part of the emerging middle class confronting an emerging non communicable illness profile – a profile that is both expensive and costly to manage, and  as such consumes the majority of the health resources.

His mother, who despite her lack of access and use of formal health services, has lived a long and healthy life – relying on local traditional medicines and knowledge.

And finally the formal health system itself – a system that has struggled to find a workable structure capable of effectively reaching the 85% of the population (like Mr Kanawi’s mother) living in PNG’s villages.  The system has, in Mr Kanawi’s professional lifetime, ranged from being centrally managed and delivered; to being split between curative and preventive; and to being administered, at different times in different ways, by different levels of Government.  He concludes that no structure has yet been able to get resources to where they are needed the most- and he is not certain current reform efforts will be any more successful.

Mr Kanawi’s offers no definitive reconciliation of the three stories.  He does, however, suggest that part of the way forward may be to turn the thinking about heath in PNG on its head.  Instead of starting from the top to get health services out; it may be more productive to look for ways to build the health system from the bottom-up.

Mr Kanawi’s story resonates with an emerging body of development thinking and practice that recognises the importance of indigenous institutions to sustainable and effective development.

Operating under various banners – “bottom-up”, “starting from here”, or “working with the grain” these theorists argue that much of what has occurred under the guise of firstly colonial administration, and later development assistance (often in the form of “good governance”) to try to build or transplant strong, stable, legitimate institutions to developing countries, has been ill conceived and ineffective (see here).

The theory suggest that when institutions are designed or imposed as top down, rational, constraint based solutions to collective action problems, they run the very considerable risk of being misaligned with existing non-formal institutions – institutions which may well be managing on a norm or collective basis some or all of the problem the top down institution is designed to address.   In these cases, confusion, inefficiency and ineffectiveness are likely outcomes.   It is also possible in these situations, “intrinsic motivation” of local actors to engage with or solve problems may be crowded out.  This approach argues:

..institutions work better when they build on what exists, make use of indigenous institutional creativity or are otherwise rooted in their sociocultural context.  They work badly when they rely heavily on the implantation, without major modification, of models that have worked well in other times and places (see here)

This analysis, based on secondary data, suggests:

The core of the paper’s argument is that simply creating (or recreating) organisational structures of the formal health system may not be sufficient to improve performance.  Rather the paper argues it may be necessary to explore different ways to buttress these organisations with at least some elements of the non-formal institutions that frame the PNG health system.  The potential of this approach is that these non-formal institutions may bring a range of incentives and motivation that will more effectively support and drive the formal health system.

The beliefs and relationships of the 85% of the PNG population living in villages (like Mr Kanawi’s mother) should be the starting point for this engagement.

Andrew McNee is a Visiting Fellow at the Development Policy Centre.