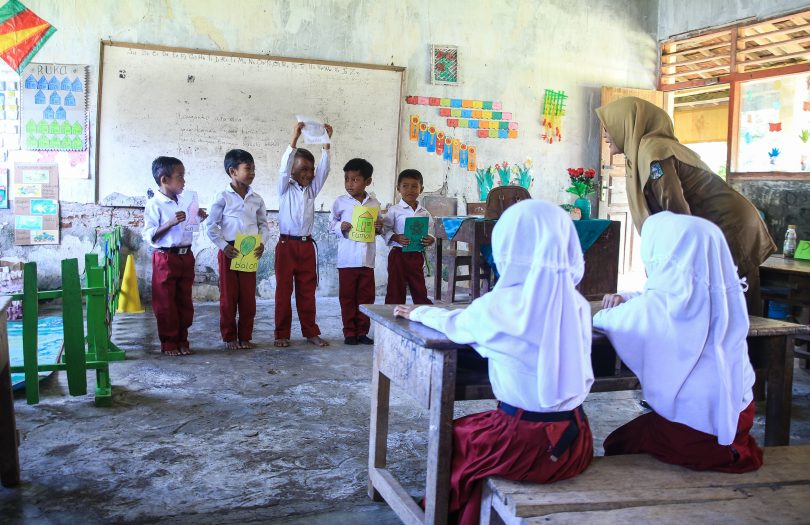 Ibu Nurdiana, a teacher involved in the INOVASI Bima pilot, teaches strategies for language and learning in the classroom (Credit: INOVASI)

For an estimated 221 million school aged children around the world who are without access to schooling in their local language, the challenge of delivering linguistically and culturally inclusive education could not be more important.

In Indonesia, one of the most linguistically diverse nations in the world, the constitution mandates Bahasa Indonesia as the sole language of instruction in formal education – a decision driven by considerations of national unity and identity. Although the constitution does allow for local languages to be used in a supplementary sense during the early grades, few teachers are trained in appropriate teaching methodologies for second language acquisition. Furthermore, many local languages in Indonesia do not have a standardised alphabet or existing learning materials.

Planning for INOVASI’s first language and learning pilot commenced in August 2017 in Bima, a remote district of West Nusa Tenggara. Having learned from the pre-pilot phase, which we reflected on here, a full pilot got underway in 2018. From the pool of teaching strategies tested in the pre-pilot, the ‘language bridge’ method emerged as most effective with partner teachers. This sees the gradual process of language transition, first using local language Bahasa Mbojo as the language of classroom instruction, and then gradually introducing Indonesian. After this, Indonesian is used during all lessons, usually by Grade 3. The existence of some written materials and an alphabet in Bahasa Mbojo supported the decision to use a language bridge approach, with supplementary strategies including reading corners, classroom wall dictionaries to improve vocabulary, and constant teacher reflection.

In Sumba, a remote island in Eastern Indonesia, INOVASI is also experimenting with differing approaches to the issue of local language use in early grade classrooms. All four Sumba districts scored well below the national test average in reading, mathematics and science, and all districts face issues of remoteness, low teaching competency, and high prevalence of local languages in homes and communities.

Kodi (pronounced ‘kod-hi’ by native speakers) is actively used by 20,000 speakers across Indonesia’s Southwest Sumba district. It is the second largest ethnic language in Southwest Sumba after Wewewa.

Since late 2018, INOVASI has partnered with the Summer Institute of Languages (Suluh Insan Lestari, or SIL) to pilot their Bloom book approach to support local language literacy learning. While language transition remains a core focus – given national language requirements – there is a strong element of native language preservation.

SIL’s innovative Bloom software eases the process of bookmaking so that more people can participate – users can create an original text or select a template, called a ‘shell book’, and insert culturally appropriate pictures and local translations of text.

Consensus has already been reached around a Kodi language alphabet, at a recent workshop attended by 16 native Kodi speakers, a Kodi language specialist, observers, district education office representatives, teachers and principals. Moving forward, levelled children’s reading books will be developed in Kodi, to foster a love of reading and to provide an essential stepping-stone for students. School-based reading corners will also help to rally community support for reading. 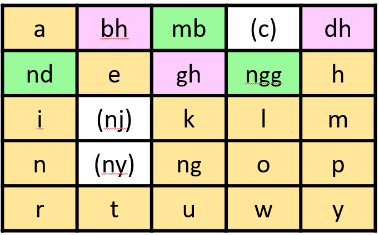 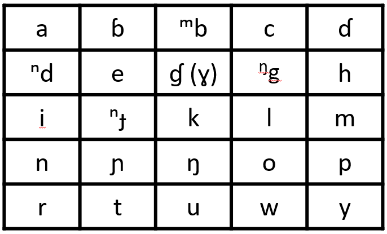 The agreed-upon Kodi alphabet. On the left is the alphabet written in letters to show what letters sound like; this is suitable for readers in general. On the right is the original letter symbol, for linguistic purposes.

Petrus Lambe, Program Manager of SIL’s Southwest Sumba branch, described why it is important for children to learn the basics of reading in their first language, before transitioning:

“Creative reading in [the] Kodi language can be a bridge for helping children learn Indonesian. Mastery of mother tongue is very important because by mastering the practical concepts in their first language, only 20% of the original effort is needed to master the concepts in the national language.”

In East Sumba, local language prevalence is equally as strong, but with written materials available. INOVASI’s recent baseline study found that 72% of children in East Sumba use a local language, the most common being Kambera (27%) and Bugis (21%).

Working with the Sulinama Foundation, INOVASI is training teachers in local language-based early-grade reading and writing with child-friendly and levelled books. Local facilitators mentor teachers in partner schools, demonstrating the appropriate use of local language and Bahasa Indonesia as an instructional language according to the needs of the children. 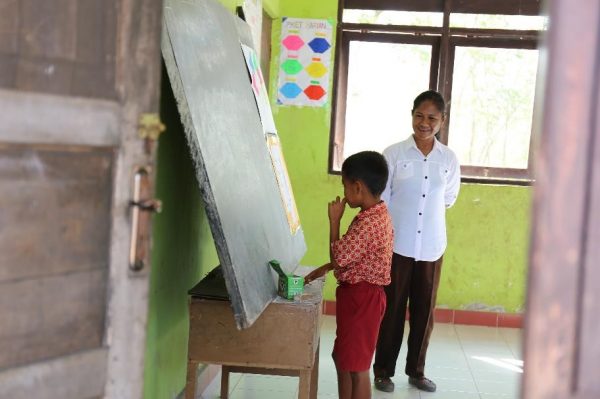 Early in the pilot, teachers faced many issues with the strong prevalence of local language. Ill-equipped with effective strategies and knowledge, they often mixed both the local language and Bahasa Indonesia when teaching, an unhelpful strategy for students.

At one remote primary school, SD Wunga, classroom teaching has now improved with the use of better lesson study planning and a transitional teaching model that supports the acquisition of Bahasa Indonesian. This is similar to the approach used in Bima. In implementing this method, teachers arrange their lesson study plans together in advance, selecting a ‘model teacher’ each week to implement the plan, with other teachers sitting in to observe and watch.

“There are interesting lessons from the process of learning in Grade 2. Now, students experience the learning, there is more intensive interaction and good communication between the teacher and student,” said Naomi Padjadja, an early grade teacher at SD Wunga.

As both the Bima and Sumba pilots continue in 2019, we will certainly see more and more of what does and doesn’t work to help improve language transition and literacy learning outcomes for Indonesian children in the classroom.

The Innovation for Indonesia’s School Children (INOVASI) program is a partnership between the governments of Australia and Indonesia, managed by Palladium. Working directly with Indonesia’s Ministry of Education and Culture, INOVASI is seeking to understand how student learning outcomes in literacy and numeracy can be improved in diverse primary schools and districts across Indonesia. INOVASI is working in a range of locations across Indonesia, and uses a distinctive locally-focused approach to develop pilot activities and find out what does and doesn’t work to improve student learning outcomes. Learn more about INOVASI at http://www.inovasi.or.id/en/.

Kania Dewi is a Provincial Education Officer for the INOVASI program.

Stephanie Carter is Communications Manager for the INVOASI program.