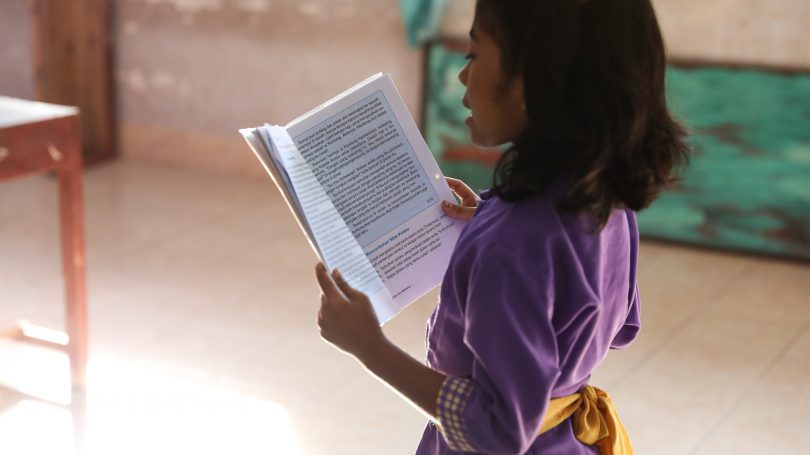 Indonesia is the most linguistically diverse nation in Asia, yet unfortunately its education system does not reflect this rich linguistic multiplicity. Indonesia’s constitution mandates Bahasa Indonesia as the sole language of instruction in formal education. Bahasa Indonesia, which was selected in 1928 as the country’s official language in an effort to promote national unity and identity, is the mother tongue of less than ten per cent of the population. This means that the vast majority of Indonesian students begin their schooling in an education system that they cannot fully understand or participate in.

An Australian Government-funded education program, Innovation for Indonesia’s School Children (INOVASI), is working to address this issue through a pilot called GEMBIRA (Gerakan menggunakan Bahasa Indonesia yang baik dan benar) in the West Nusa Tenggara district of Bima. Working with a range of teachers, INOVASI is designing locally-driven ways to improve learning outcomes for students whose first language is not Bahasa Indonesia.

It is estimated that less than ten per cent of the Indonesian population has access to education in their first language – among the lowest percentage in Asia. Despite significant investments in education spending over the last twenty years, learning outcomes have not improved at the rate expected, and Indonesia still lags behind its regional and global peers.

Students and teachers in the remote Indonesian district of Bima face challenges on many fronts. Wider issues of teacher training, remoteness, and lack of resources are compounded by a high prevalence of local languages in homes and communities, resulting in extremely low learning outcomes for students. Bima scored the lowest of all districts in the province for reading, mathematics, and science, and more than one standard deviation below the national average for all subject areas.

Although the Indonesian constitution does allow for local languages to be used in an auxiliary function during the early years, few teachers are trained in second language acquisition and teaching methodologies. The default strategy we observed teachers using in Bima when students didn’t understand the message in Bahasa Indonesia or materials, was to directly translate or code switch – an unsustainable strategy long-term as local languages are no longer permitted beyond early grades.

Further complicating matters for students and teachers is the fact that many local languages in Indonesia, including Bahasa Mbojo in Bima, do not have a standardised alphabet or existing learning materials. Developing these takes time, resources, and linguistic expertise.

For these reasons, INOVASI and local stakeholders involved in the design of GEMBIRA opted to focus on a language transition model that cultivates oral fluency in students’ first language while simultaneously supporting the structured acquisition of the second language. By working within the prevailing Indonesian policy structure, and with the existing level of linguistic development of the language, the model developed through GEMBIRA is expected to be more sustainable, as well as scalable to other districts and language groups.

In Bima and in all INOVASI partner districts and provinces, INOVASI uses a distinctive approach to develop pilot activities and find out what does and doesn’t work to improve student learning outcomes. In simple terms, this approach is called Problem Driven Iterative Adaptation (PDIA). It sees INOVASI working and learning directly with local partners to explore and identify local problems and co-design locally-relevant solutions. 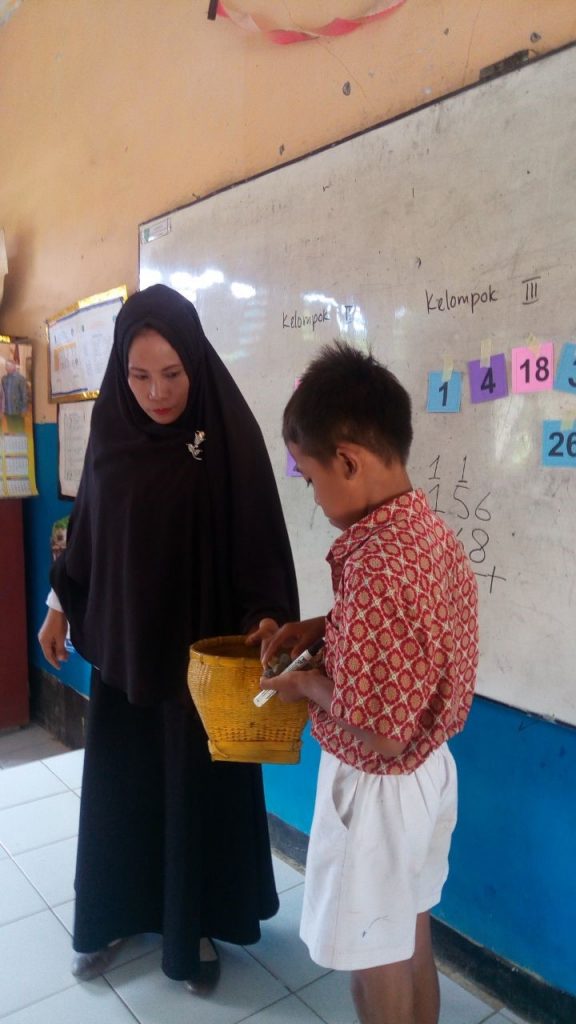 Ibu Rahmi from SDN Sila 1 now uses teaching aids she finds in her local community (in this case, small stones) during her numeracy class. By utilising physical, tangible examples that the learner is already familiar with, they can more easily make connections with the new ideas and skills that are taught, regardless of their Bahasa Indonesia fluency (Credit: INOVASI Program)

Through classroom and playground observations and interviews with early grade classroom teachers, principals, school supervisors and parents, we found a significant gap between teaching practice, materials, and the first languages of students. Around 90 per cent of teachers in target Bima schools were using local languages as an oral instructional language in the classroom, while the supporting materials and assessment tools were in Bahasa Indonesia. Teachers’ main strategy for bridging this gap was to translate the materials directly.

Armed with a better understanding of the core problem, teachers then worked together and with INOVASI language specialists to collaboratively generate ideas for better support to language minority students, before spending the next three weeks testing these ideas in their own classrooms.

Teachers also described how they were now carefully considering which language they would use to teach different topics and the learning aids they used to get messages across.

But there were also challenges. Breaking long-standing habits of code switching and direct translation is not easy, and teachers admitted they fell back into using these methods. But now, through the problem identification phase and training given during the design workshop, they understood why these practices were unsustainable.

INOVASI will use the findings and experiences of teachers in the pre-pilot phase to inform the design of a full pilot in 2018, expanding to include an additional eight schools in Bima. INOVASI also expects to implement an additional pilot also focused on supporting language minority students in East Sumba district of Nusa Tenggara Timur Province.  It’s too early yet to know if the increased participation in the classroom and confidence in Bahasa Indonesia language will translate into long term increases in learning outcomes, but by using PDIA to co-design solutions with the very people who will use it, we’re confident that we can achieve an outcome that is as sustainable as possible.

The Innovation for Indonesia’s School Children (INOVASI) Program is a partnership between the governments of Australia and Indonesia, managed by Palladium. Working directly with Indonesia’s Ministry of Education and Culture, INOVASI is seeking to understand how student learning outcomes in literacy and numeracy can be improved in diverse primary schools and districts across Indonesia. INOVASI is working in a range of locations across Indonesia and uses a distinctive locally-focused approach to develop pilot activities and find out what does and doesn’t work to improve student learning outcomes. Learn more about INOVASI here.

Naomi Fillmore is a language, education, and development specialist. She has served as a teacher, researcher, manager, and adviser to education and language initiatives across multiple countries and continents, including most recently in Nepal and Indonesia.

Wuri Handayani is an Education Specialist for the Innovation for Indonesia’s School Children (INOVASI) Program. She has worked in education for over 18 years, first as a teacher, then a school principal, and later as teacher development professional coach.