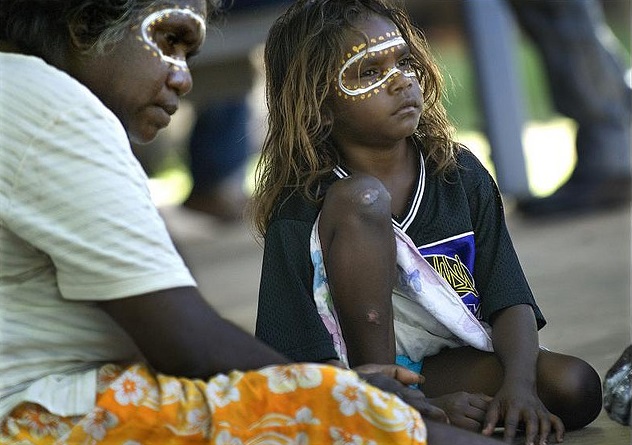 The strategy involves four aspects: influencing international policy in relation to indigenous peoples; developing programs to improve their socioeconomic outcomes through the aid program; involving indigenous peoples in people-to-people relationships and volunteer programs; and making DFAT an inclusive workplace to foster greater knowledge of indigenous affairs amongst its staff and to support indigenous staff within the Department.

In relation to the first, Australia was formerly an active participant in supporting the development of the UN Declaration on the Rights of Indigenous Peoples (UNDRIP) [pdf], but along with its CANZUS partners, it fell at the final hurdle, abstaining when the Declaration reached the UN General Assembly in 2007. It has since belatedly endorsed it along with the other CANZUS countries. The Declaration is seen by indigenous peoples globally as a benchmark for the way states and indigenous peoples should relate to each other. Few, if any, meet indigenous peoples’ aspirations in that regard. It would be extremely valuable for Australia to advocate for greater adoption of the principles underpinning the Declaration internationally, but if we are to have credibility in this regard we need to do better at home. If UNDRIP is a set of ‘minimum standards’, as the accompanying Guidance Note [pdf] about reaching indigenous peoples in the aid program says it is, then it needs to be treated as such both at home and abroad. It is certainly not being treated that way in Australia itself, and there would be some significant changes in approach if it were, including restoring the right to self-determination as a policy framework.

In relation to the second, DFAT says that it will ‘provide meaningful opportunities for indigenous peoples to participate in planning, implementing, monitoring and evaluating programs delivered in indigenous communities’ and ‘identify and address barriers, on an ongoing basis, that may prevent indigenous peoples from accessing and equally benefiting from the aid program’. These are extremely valuable goals, but again, DFAT cannot draw much on domestic Australian experience for models of good practice in this regard. Australian Indigenous people rarely get to participate in the full design cycle of programs implemented in this country. And while the Foreign Minister’s press release associated with the launch suggests the aid program will draw on Australian Indigenous peoples’ ‘experience in delivering services in regional, rural and remote communities’ at home, many Indigenous peoples’ organisations have been dismantled and defunded in the last decade, with such experience being devalued and replaced with a mainstreaming strategy. In fact, DFAT may be able to share its experience in participatory planning with its domestic counterparts to strengthen participatory practices in Australia itself.

However, DFAT will need to build strong relationships with indigenous organisations and networks within the countries where the aid program operates if it is to strengthen its own capacity to work successfully with indigenous peoples in very diverse locations. This may not sit easily with some of its partner governments that are repressing indigenous peoples, so some deft diplomacy will be required.

DFAT staff will also need to be upskilled in relation to working with indigenous people, so the proposal for some staff to volunteer in Indigenous Australian communities may be one way of gaining such an understanding, but more will be required. Just as the gender policy required a whole raft of processes to embed its implementation throughout the aid program and project cycles (a continuing challenge after decades of policy), so implementation strategies will be needed if the Guidance Note about reaching indigenous peoples in the aid program is to be fully implemented. Indeed, much of the advice in the Guidance Note is good and could be usefully adopted by governments in Australia working with Indigenous peoples at home.

Turning to Australia, it would be useful for Australian Indigenous policymakers and program managers to read the Guidance Note and ask themselves whether the way policy and programs are developed in Australia accords with the advice provided in it. For example, the need to support the capacity of Indigenous peoples to engage effectively with governments and the capacity of governments to meet the needs of Indigenous peoples, the need for culturally and linguistically appropriate education programs, and the importance of maintaining access to customary lands are all emphasised in the Guidance Note. It also calls attention to power imbalances and how to address them. These issues of governance capacity and acceptance of cultural difference remain challenges in domestic Indigenous policy.

All of this suggests that while it is good to see greater attention to indigenous peoples in our foreign policy and aid program, it is high time for more developmental approaches to be adopted in Australia. One example of why participation is important was provided at the launch by Social Justice Commissioner, Mick Gooda, in relation to inadequate gender and cultural understanding in the design of a remote health centre. Had there been good participatory planning, the need for separate male and female entrances would have been evident; but instead the men could not use the clinic until that was rectified. Mr Gooda emphasised the need for greater cultural competency to avoid such problems and that’s correct – but good, gender-sensitive participatory methods could have revealed it as well. Both are actually needed at home and abroad. And many of the approaches to program design and the project cycle used in the aid program could be of value to those working in Indigenous affairs in Australia.

Overall, there is much that could be gained by a greater dialogue between development practitioners and domestic policy and program leaders working on indigenous affairs policy. This strategy launch hopefully opens up these possibilities.

Dr Janet Hunt is a former Director of the Australian Council for International Development and is now a Researcher at the Centre for Aboriginal Economic Policy Research (CAEPR) at the ANU.

Dr Janet Hunt is an Associate Professor at the Centre for Aboriginal Economic Policy Research (CAEPR) at the ANU where she teaches and conducts research about Indigenous development in Australia. She was previously Executive Director of the Australian Council for International Development and Executive Director of the International Women’s Development Agency. She is part of an international research team which has recently developed a new, gender-sensitive measure of poverty.