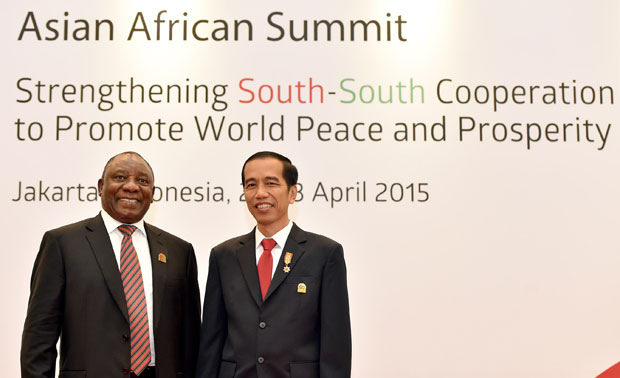 In mid-2014, Joko Widodo (known popularly as Jokowi) was elected as the President of Indonesia, supported by the Indonesia Democratic Struggle Party (Partai Demokrasi Indonesia-Perjuangan, or PDI-P), which inherited its political identity from former President Soekarno’s nationalism. In his Nine Development Priorities Agenda, or Nawacita, President Jokowi identifies the importance of scaling up South-South cooperation under the Security, Protection of Citizens and Foreign Affairs Program [pdf]. The South-South cooperation agenda urges the government to further develop and renew its development cooperation policy and program. However, the challenge of implementing effective programs in other developing countries remains significant, due to internal political and economic concerns, as well as limited effective models that can be implemented within the Indonesian context.

Part of the South-South cooperation agenda in Jokowi’s foreign policy was for Indonesia to host the 60th anniversary celebration of the Asian-African Conference on 19–24 April 2015 in Jakarta and Bandung. The conference was attended by 34 heads of state, including from China, Japan, Iran, Malawi, Zimbabwe, and Jordan, as well as 77 representatives from international organisations. The event highlighted the importance of the new economic international order that is opening for emerging powers and that challenges the old way of cooperation by Bretton Woods groups. In his speech, President Jokowi reiterated the importance of South-South cooperation and the ‘Bandung Spirit’ as stated by Soekarno in 1955.

There are three core objectives of South-South cooperation: 1) to strengthen cooperation to achieve prosperity by eradicating poverty, improving education and health, promoting science and technology, and providing jobs; 2) to improve solidarity among Asian and African countries through inter-regional economic cooperation and support connectivity by building more infrastructure facilities; and 3) to promote internal and external stability through respect for human rights, gender equality, and peacebuilding.

Looking at the objectives of the conference as stated in his opening speech, President Jokowi brings about a sense of cooperation and nationalism as needing to be strengthened among Asian and African countries. This includes the need to build and renew a model of cooperation within the international economic system that has previously been dominated by a Western-led economic order.

Considering the narrative of Indonesian South-South cooperation under President Jokowi and comparing it to President Soekarno’s notion in his early years generates some interesting discussion. In the opening speech of the first Asian-African Conference in 1955, President Soekarno highlighted the need for all nations to work together in diversity, especially Asian and African countries, and respect for the freedom, independence, and welfare of all nations. The conference built upon the notion of ending the top-down setting in the international system, which maintains relations between the colony and periphery countries and the unequal North–South model of cooperation. It also recognised the importance of understanding the needs and equal rights of newly decolonising nations and resisting the hegemony of Cold War blocs. Identifying the importance of independence and the need to fight any form of colonialism, President Soekarno emphasised the importance of solidarity, non-alignment, and non-interference among post-colonial countries, especially in Asia and Africa. His view, echoed by other Southern leaders, strongly advocated for Southern countries working together. This idea was also reflected in the ‘Bandung Spirit’ written into the communiqué of the first Asian-African Conference. This raises the question of whether Soekarno’s South-South cooperation rhetoric of anti-colonialism has re-emerged in Jokowi’s foreign policy doctrine, especially within development cooperation, and whether this rhetorical notion has successfully translated into a sound development program.

With the implementation of cooperation, President Soekarno was criticised [pdf] for failing to move beyond his rhetoric, as there were no subsequent significant actions in Indonesia’s South-South cooperation activities. President Jokowi’s foreign policy identity strongly reflects his domestic policy, in that it focuses on infrastructure, food security, and health programs. Bringing closer cooperation with China, as President Soekarno did in his era, is expected to be especially important for Indonesia’s development program. Besides that, cooperation with ASEAN should be increased, especially given that Indonesia initiated knowledge sharing modalities as part of the global development cooperation discourse during the High Level Meeting of the Global Partnership for Effective Development Co-operation (GPEDC) in 2014. As an emerging middle-income country, the traditional model of cooperation might not be suitable for the current conditions. Thus, it opens up a significant opportunity for Indonesia to bring its knowledge sharing initiatives to a new level of cooperation, as a way to promote Indonesia’s experiences and knowledge.

Furthermore, the opportunities to renew the model of cooperation and reinstate the old message that lay in nationalism and national identity certainly need to be considered within the new global context and in internal political negotiations. Nationalism, as a continuous effort to create a narrative discourse within the nation, is often seen as a process for Indonesia to establish its South-South cooperation identity as one that moves beyond its old rhetoric. The political commitment needs to be re-established to shows its identity by bringing wider stakeholders not only within the discourse of its involvement in development cooperation, but also through active participation in the implementation of the activities. The narrative of Indonesia’s South-South cooperation should move beyond political discourse by recapturing the nationalist spirit and considering the wider global development context of the issues.

Looking at these two situations, renewing the message of Indonesian South-South cooperation content from President Soekarno’s rhetoric to President Jokowi’s pragmatic approach to development cooperation should be discussed more thoroughly. Bringing the old message to the current global context can be challenging. However, now is the time to showcase more opportunities to strengthen Indonesia’s national identity within the international context, and to provide a clear linkage between development policy and international cooperation. Of particular concern is thinking about how Indonesia can improve the way it provides external partnerships through knowledge sharing. These modalities of cooperation can be utilised in the context of Indonesia and bring out Indonesia’s identity for future cooperation, with greater potential to flourish within the global development cooperation context.

Miranda P. Tahalele is a PhD candidate in Gender and Development Studies in the College of Arts and Social Sciences (CASS) at ANU. She previously worked as Project Manager for UNDP projects in the Ministry for National Development Planning (Bappenas), Indonesia.

Miranda Tahalele is an independent researcher with a PhD from the Australian National University. She has previously worked with a wide range of international and Indonesian development organisations.