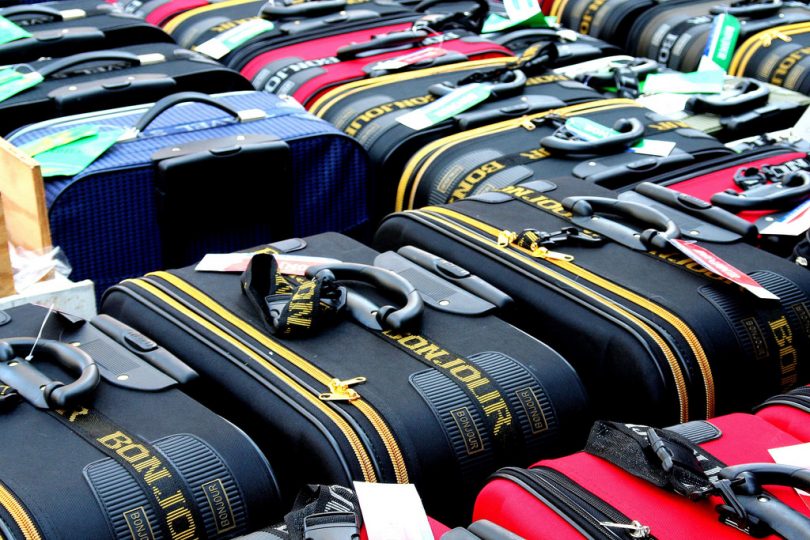 Intra-regional migration has a long history in the Pacific. Most movement of people in the region in the nineteenth century was unregulated, despite the growing colonial influence (Epeli Hau’ofa, 1993). This movement slowly declined, however, leaving wide disparities in the size of diasporas across the region (Howe 1984; Moore et al. 1990; Burson & Bedford 2013). Migration today is unevenly distributed across the Pacific, due in part to the strength of various push and pull factors, including employment opportunities, income levels, availability of education and other social services.

It is important to note that the decision to migrate is merely the first step for any individual. Other factors are important in determining whether that migration decision can be acted upon, including capital available to fund migration, and entry/visa requirements in the destination (which are often shaped by bilateral and regional agreements). This blog post provides an overview of present-day intra-regional migration and considers its drivers.

In 2015, the total migrant stock into the Pacific region was 297,487. However, of this total only 22.72% of the migrants were Pacific islanders (shown in Figure 1) while 77.28% were from the rest of the world. What is striking in the figure is that the larger Melanesian countries, especially Papua New Guinea and Solomon Islands, have far lower rates of intra-regional migration than the smaller countries concentrated in Micronesia and Polynesia. At the other end of the regional spectrum, high levels of intra-regional migrant movement are evident amongst the Compact of Free Association States in the North Pacific.

Figure 1: Inward and outward intra-regional migration rate in the Pacific, 2015 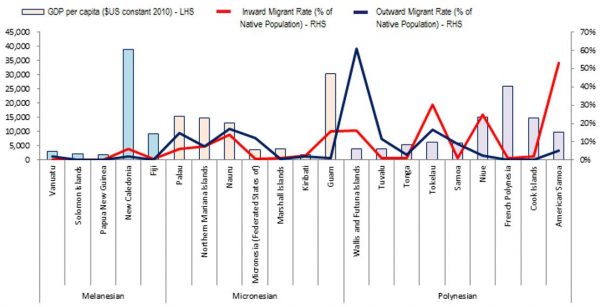 The five destination countries within the region that cater for the highest number of Pacific migrants are: American Samoa (53.32%), Tokelau (30.41%), Niue (24.98%), Wallis and Futuna Islands (16.08%) and Guam (15.50%). All are small and have relatively high incomes by Pacific island standards. The other common link amongst these destinations is that they are either an unincorporated territory of the United States (American Samoa and Guam), are in free association with New Zealand (Tokelau and Niue), or are a French overseas territory (Wallis and Futuna). Correspondingly, countries with high outward intra-regional migration rates include Wallis and Futuna, Nauru, Tokelau, Tuvalu, Palau and Federated States of Micronesia. Once again, many of these enjoy special relationships with metropolitan powers like the US, France or NZ. Those that do not (Nauru and Tuvalu) are micro-states.

Why should special relationships with metropolitan powers matter? Because these relationships often ease access for migration among countries and territories with the same metropolitan relationship. Closer examination of bilateral movements reveals heavy exchanges of intra-regional migrants amongst Guam, Marshall Islands, Federated States of Micronesia, Commonwealth of Northern Mariana Islands and Palau – all of which fall under the Compact of Free Association with the United States. These countries share special privileges of entry, work and stay. Likewise, there is significant migration amongst New Caledonia, French Polynesia and Wallis & Futuna – which fall under the French cluster. It is noted that an agreement with special provisions for working rights exists between New Caledonia and Wallis & Futuna; which explains why 99.58% of intra-regional migrants from Wallis and Futuna move to New Caledonia. In the same way, intra-regional migrants from Palau primarily migrated into Guam (63.19%), Northern Mariana Islands (24.60%) and Federated States of Micronesia (12.21%). The same applies in the case of intra-regional migrants from Federated States of Micronesia, who primarily migrate to Guam (85.58%), Northern Mariana Islands (8.97%), Palau (3.50%) and Marshall Islands (1.95%).

There are exceptions to this, including peculiarities in the data which require historical analysis for explanation. For example, in 2015 99.5% of intra-regional migrants from Nauru went to Kiribati. The most likely explanation is that these migrants formed a pool of returnees (judging from the significant percentage of migrants in Nauru from Kiribati in yesteryears – a legacy of the phosphate mining boom). Applying a similar rationale and considering previous years’ data, many Tokelauans who moved to Samoa in 2015 (83.46% of all outward migrants from Tokelau) were likely return migrants.

A geographical migrant concentration index, which assesses how broadly or narrowly migration routes are distributed across the Pacific region for each country, is presented below (Figure 2). It ranges from zero to one, whereby a higher value represents people movement concentrated into limited destination countries and a lower value demonstrates migrants geographically dispersed to a wide range of destination countries.

The box plot for the Pacific region is skewed rightwards showing limited migratory routes. Fiji has the lowermost index of 0.37 with 13 host countries, while Wallis and Futuna Islands has the highest concentration rate with only 2 hosts (of which New Caledonia is by far the most important). The countries with the lowest concentration index (Quartile 1: Fiji, Kiribati, Tuvalu, Tonga and New Caledonia – in that order) feature emigration to an extensive array of destination countries. In contrast, countries with the highest concentration index (Quartile 4: Wallis & Futuna, American Samoa, Samoa, Northern Mariana Islands and Federated States of Micronesia) mainly travel to a handful of destinations.

Khushbu Rai is a Masters student in the School of Economics at the University of the South Pacific. Her thesis examines the extent of intra- & extra-regional labour movements alongside the level of export-basket heterogeneity within the Pacific relative to the Caribbean countries.

Khushbu Rai is a Masters student in the School of Economics at the University of the South Pacific. Her thesis examines the extent of intra- & extra-regional labour movements alongside the level of export-basket heterogeneity within the Pacific relative to the Caribbean countries.