One of the clearest correlations in development is that between quality of governance and wealth. You can see the relationship in the chart below (from this excellent but paywalled article in the Annual Review of Political Science). 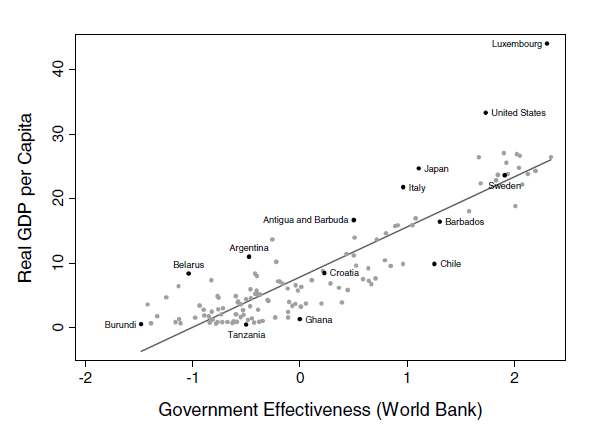 Once, in the not too distant past, the prevailing explanation of the relationship was political modernisation theory, which tended to focus specifically on democracy, but could be thought to be applicable to other aspects of good governance too. Its proponents argued that economic development lead to democratisation (and if you’re willing to stretch the argument a bit further, that countries got wealthy and this subsequently led to them becoming better governed in a range of ways beyond democracy alone).

Recently though, it looks as if the pendulum is swinging back the other way. Some smart critiques have been made of the (quantitative) evidence used for the claim that good governance and/or good institutions cause economic development (see here, here, here and here, for example). And in a similar vein, in a blog post earlier this year, ODI’s David Booth came out swinging against the belief that good governance is a necessary precondition for economic development, writing that:

The history of human progress, from 17th century England to 21st century China and Vietnam, is completely clear on this point: governance ideals are realised over time on the back of economic progress, not the other way round.

Booth is a guru in research in this area and the case studies he’s been involved with are excellent. Booth is also someone who (I think it is fair to say) was once a believer (if not a dogmatic believer) that the causal arrow ran from governance to development, and not the other way round. And the fact that his position appears to have shifted makes it all the more interesting (I have much more respect for researchers whose views evolve than I do for dogmatists).

And yet, I find his argument that good governance does not matter unconvincing, for three reasons:

As an alternative to both simplistic ‘governance is all that matters’ and political modernisation arguments, I would suggest:

On these last two points I think Booth and myself are more or less in agreement. Indeed, much of Booth’s post is interesting and nuanced, but in making the bold claim that good governance is foremost an effect of economic lift-off, he strayed perilously close to substituting one unhelpful simplification for another.