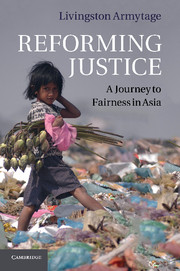 Has aid failed? This question has been considered many times before by both supporters and critics of aid. In Reforming Justice: A Journey to Fairness in Asia the question is considered yet again by Livingston Armytage, but from the point of view of judicial reform.

Armytage is an Adjunct Professor of Law at the University of Sydney and is an internationally recognised specialist in judicial and legal reform. His book’s central argument is that there is not yet enough evidence to demonstrate that judicial reform has failed, but that disappointing results nevertheless necessitate its reinvention. Armytage defines judicial reform as those activities that focus on ‘assisting the judicial arm of the government–the courts, judges and related personnel–to adjudicate the law and administer justice’ (p. 29). It is distinct from, and more specific than, general law reform activities. Armytage argues that judicial reform should promote justice, defined in terms of fairness and equity. In practice, judicial reform should enable the exercise of rights and entitlements found in international, domestic and customary law.

The book is divided into three parts: part 1 focuses on the history, nature and philosophy of judicial reform; part 2 on aid evaluation; and part 3 provides three case studies of the judicial reform experience in Asia. These are big topics, each worthy of a standalone book. Given that Reforming Justice has less than 300 pages of text, Armytage set himself a considerable challenge to address all three in one manuscript.

For me, Armytage fell short of his goal. I struggled to find flow throughout the text and at times the ideas were laboured to the point of being repetitive. At other times conclusions were drawn quite quickly, with only superficial analysis. (For examples of the latter, see: Engagement in the informal customary sector and legal pluralism’ (pp. 64 – 65); ‘The fulcrum of liberalism’ (pp. 84 – 85); and ‘Development’s failure to ensure equitable growth’ (pp. 105 – 109)). The book is almost like a patchwork quilt, where all the patches have been finished but have not been sewn together.

Part 1 addresses the question ‘what is judicial reform?’ After providing a history of the role of judicial reform in ODA since WWII, Armytage turns to the nature of the reforms. He draws a line between reforms based on ‘thin’ and ‘thick’ concepts of justice. Armytage argues that to date, most reforms have been based on ‘thin’ concepts and focused on procedural issues, such as increasing the efficiency of courts. In this approach, justice only plays an instrumental role in development as courts serve to protect property rights. On the other hand, reforms based on ‘thick’ notions of justice address substantive issues, such as enhancing individual rights or strengthening political institutions. From this perspective, Armytage sees a constitutive role for justice in development where it is not subordinated to the economic creation of wealth but rather actively promotes fairness, and embraces the distributive dimension of poverty alleviation. This is a bold idea.

However, I was unconvinced by Armytage’s arguments. The question I kept finding myself returning to was ‘how can judicial reform help achieve equitable growth if there is no legal basis for it?’ While there is scope for judicial activism in particular legal systems, this is still limited by the law itself. If there are few laws in place that promote fairness and equity, judicial reform will never be able to play the role that Armytage has proposed. To address this, Armytage points to the rights enshrined in international human rights treaties. Yet it is well known that these are difficult, if not impossible, to enforce domestically. For me, much of Armytage’s vision for judicial reform actually falls within the ambit of law reform. In fact, the two areas of reform are talked about together and sometimes interchangeably throughout the book, despite the fact that he makes a clear distinction between the two and says that his focus is the former.

Part 2 of the book takes a close look at aid evaluation and considers the questions ‘what should we measure?’ and ‘how should we measure it?’ when it comes to judicial reform. This was the strongest part of Reforming Justice from my point of view. Armytage begins with a comprehensive review of the theory and practice of development evaluation before refocusing on judicial reform. He argues well that when it comes to judicial reform evaluation is rarely done (the ‘evaluation gap’) and, when it is, it is not done well (the ‘meta‑evaluation gap’). To address the meta-evaluation gap, Armytage proposes that evaluations should be based on an agreed normative framework and suggests again that the international human rights treaties could play a role. Unfortunately, only a few pages are dedicated to this vision for the future and this was not enough to convince me that Armytage’s vision was feasible.

Part 3 of the book then takes the reader on a whirlwind trip around Asia via three case studies: the ADB’s Law and Policy Reform Program, AusAID’s (now DFAT’s) Papua New Guinea Law and Justice Sector Program and a selection of experiences taken from the UNDP’s Searching for Success: Voices from the Asia Pacific Experience [pdf], which Armytage was the technical editor of. The motivation for including the case studies is clear: a real world context and a chance to examine what the actual evidence is regarding whether judicial reform is effective. The case studies are illuminating and provide some excellent food for thought for those working in judicial reform. While they provide evidence for the argument that it is too early to conclusively state that judicial reform has failed, it is less clear how they relate to Armytage’s main argument that judicial reform ought to promote justice.

Overall, I was left unconvinced by many of the arguments in Reforming Justice. While the book does propose a number of interesting questions, many of these questions were still unanswered at the end of the text.

Tracey Blunck completed her Masters in Public Policy at the Crawford School in 2013, and won the Raymond Apthorpe prize for best student. Tracey is admitted as a lawyer in the Supreme Court of Queensland and the High Court of Australia and practiced for a number of years before completing her Masters.

Tracey Blunck completed her Masters in Public Policy at the Crawford School in 2013, and won the Raymond Apthorpe prize for the best student.