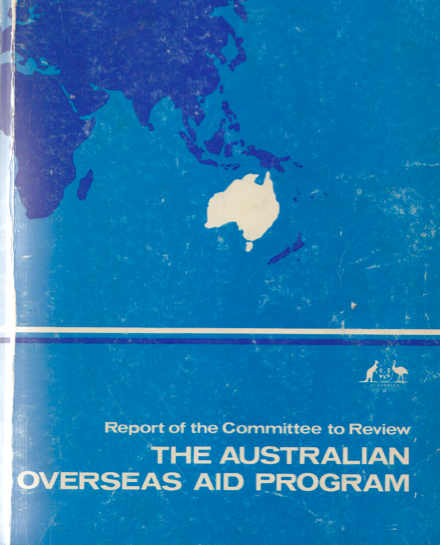 The recent announcement by Kevin Rudd of a review of the Australia aid program makes it interesting to look at previous reviews and their recommendations.  In 1984, the Jackson review published its report on Australian aid. Here is an abridged summary of the 12 key recommendations.

It is widely agreed that development in the sense of the alleviation of poverty should be the principle objective of aid. Views differ widely on whether aid should be directed to providing basic needs for the most disadvantaged groups or whether it should be used to promote economic growth.

2. Australia should continue to aspire to the goal of providing 0.7% of national income as aid.

Australia should advance towards this target as the economy grows and as domestic conditions permit. It would be undesirable to prescribe precise targets dates and ratios, but equally Australia’s aid effort should not slip back. Australia should remain in the top half of the donors’ league table.

3.  Aid strategies should be developed ahead for five years or so on an indicative forward-rolling basis.

Country analysis and aid strategy formulation should be the core of aid programming. Projects and programs should be carefully prepared and appraised against a country’s development background in detailed financial and socio-economic terms. Much more systematic implementation and monitoring procedures should be introduced, and projects and programs should be evaluated after completion to ensure that accumulated experience is systematically fed into future aid delivery. Similar analysis, taking institutional issues into account, is needed for aid flowing through international agencies, food aid and other components of aid.

4. There should be no immediate change in the level and form of Australia’s aid to Papua New Guinea.

Additional assistance should gradually be introduced within a bilateral country program to give Papua New Guinea access to training, technical assistance,  research and voluntary agencies, and to expand these activities to include projects, co-financing and other forms of aid.

The overall decline in Australia’s aid should be at least 3 per cent in real terms. In this way, the aid program would be gradually normalized, although it would take 25-30 years for the balance of Australian aid to move from budget support to a normal bilateral country program.

5. Australia, should develop special expertise in the economic development of small island states and associated regional issues to improve aid delivery to such countries.

Because the countries are small, aid co-ordination is a particular problem in the Pacific. The World. Bank and the Asian Development Bank should be encouraged to take a lead in improving economic analysis, effectiveness and co-ordination in aid delivery in this region.

In view of structural problems which are beyond their control and beyond the reach ofaid, Australia should make available limited opportunities for immigration from Tuvalu and Kiribati.

6. A considerable aid presence should be maintained by Australia in ASEAN and other East Asian countries.

The country, sectoral, and institutional knowledge needed for efficient aid delivery should be acquired as the basis of country aid strategies. Australia’s major project concentration in countries in this category should be in sectors in which its expertise can be of real assistance.

7. Australia’s aid programs should make a special effort to assist women to play a, full and equal role in development.

Population planning and nutrition programs should have high priority. Special programs should be devised to train women to raise their earning capacity and their leadership potential. A major effort should be made to raise the proportion of women trained in Australia to 50 per cent of all students from developing countries. Aid should specifically avoid discrimination against women, for example in agricultural work and in access to credit. A special central fund, additional to country program funds, should be used to stimulate projects specially designed to meet the needs of women, Australian women should be encouraged and assisted to pursue professional careers in development.

8. Assistance for education within developing countries should be emphasised in bilateral country aid programming.

More support should be given to curriculum development and teacher training for primary, secondary, and vocational schools. Support for national and regional post-secondary education should be continued with a strong emphasis on the involvement of Australian colleges of advanced education, and technical and further education institutions.

9. Technical assistance should be facilitated by a register of expertise.

There should also be better arrangements for government and private sector secondments, and greater assistance to volunteer programs.

10. Particular attention should be paid to building up policy-oriented analysis in development.

Areas of research where Australia has expertise should be expanded. The Australian Development Assistance Bureau (ADAB) should have a Development Research Grants Funds of at least $A5 million a year for non-agricultural research.

11. Support for development banks in principle, and for the World Bank and the Asian Development Bank in particular, should be increased.

Priority should go to the International Development Association and the Asian Development Fund that particularly assist the poorer countries.

Support for United Nations organisations should focus on the funding role of the United Nations Development Program. Australia should oppose further proliferation of multilateral aid agencies or programs. Support for effective Commonwealth and regional programs should be maintained in the context of country programming.

These front are: an immediate ‘catch-up’ program to remedy the most critical deficiencies; an on-going program to strengthen management; a different internal structure which will allow the necessary work to be done in a professional style by people employed in satisfying, exciting jobs; and a different place within the bureaucracy so that accountability is clear and necessary resources are available within the organisation.

A small external group should be established for a limited period to monitor the implementation of the proposals adopted by the government on the basis if this report.