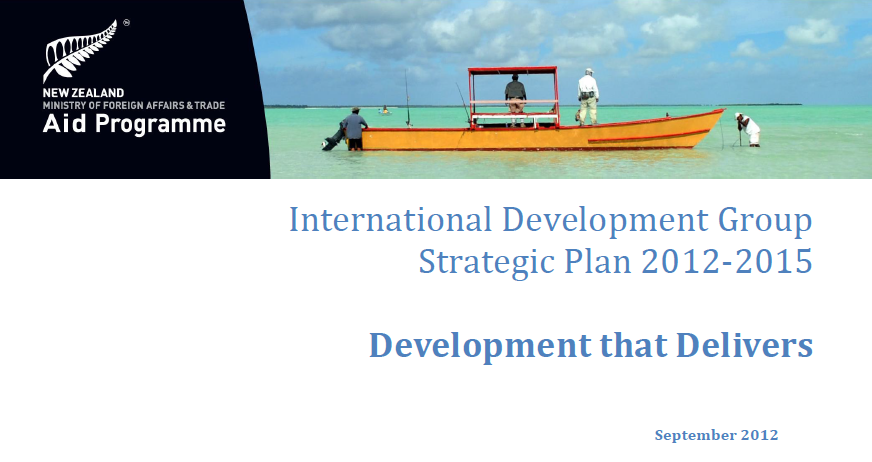 The New Zealand Ministry of Foreign Affairs and Trade has released their ‘International Development Group [IDG]Strategic Plan 2012-2015 – Development that Delivers [pdf]’, which complements and expands on the government’s ‘International Development Policy Statement [pdf]’. The strategy sets out the vision, mission, areas of focus and results for the government aid program, which IDG administers. There’s a lot to unpack. This blog covers a few overarching observations.

The Strategy is a solid contribution to increasing the transparency and accountability of the New Zealand Aid Program. The strategy is the result of a good deal of work, and gives a succinct outline of the current global development context, how the aid program will go about its work and what results it is aiming for. It provides a guide for those both inside and outside IDG, and some measures to assess the aid program’s performance. The strategy’s detailed breakdown of funding allocations per program is welcome.

New Zealand aid is used for diplomatic and trade outcomes, not solely development outcomes. The strategy describes how New Zealand’s aid contributes to the Ministry’s strategic priorities by helping to: build New Zealand’s relationships, partnerships and influence with Australia, the USA, China, key emerging economies, the EU and the Middle East; support trade and economic integration in the region; build international rules-based systems; and advance the government’s Business Growth Agenda. Development outcomes are included in the list: a stable and fair international environment; and “improve[d] prosperity and reduce[d] risk in the Pacific region” (p. 3), but the other strategic priorities crowd these out.

The most explicit examples of the use of aid for diplomatic and trade outcomes are found in the allocations for the ASEAN Program, totalling approximately NZ$25 million/year (based on 2011/2012 allocations – the only available figures). Of the ASEAN Program’s four ‘flagships’, Disaster Risk Management is the only one with obvious development outcomes. If the Burma activity (here, here) is any indicator of the Agricultural Diplomacy flagship, it looks to be predominantly about enabling New Zealand commercial interests. The explicit purpose of the Young Leaders Initiative flagship is to build relationships between Asian and New Zealand businesses. And the fourth flagship, ASEAN Scholars, is open to all ASEAN countries, including Brunei and Singapore, both of which are not developing countries.

There is nothing wrong with using New Zealanders’ taxes for diplomatic or trade outcomes. But this money should be allocated to these goals, leaving aid to be used for, and assessed against, its intended purpose of improving the lives of people in developing countries, thereby increasing aid’s effectiveness and efficiency.

New Zealand’s aid policy remains a lopsided stool. The Aid Program prioritises economic growth and development, although it has four areas of focus: economic well-being; human development; resilience and recovery from emergencies; and safe and secure communities. The funding breakdown for the period 2012/2013 to 2014/2015 (p. 14) demonstrates that about 40% of total aid will go to economic development activities. Education and health will receive 27.5% (scholarships are about 40% of this). About 25% is multi-sectoral. There is no sign of how programing integrates the cross-cutting issues of human rights, gender and environment.

The logic underpinning this state of affairs stems from the belief that aid should focus on economic development because  economic growth fuels improvements in other areas of human life, such as health and education. This is true as far it goes: economic growth is necessary to improve human welfare. But it is not sufficient. What is more, much is uncertain with respect to how aid can foster economic growth, or even if it can improve growth. On the other hand, it is known that aid can improve health, for example. (See a Summary [pdf].) Given New Zealand’s small aid program, it may have been better to be less ambitious in investing heavily in economic growth, where it is uncertain what aid can sustainably achieve, and to focus aid on investing in areas where it is most likely to make a difference.

The country allocations in the Pacific indicate disparities based on development needs and population. For example:

There may well be a solid rationale for this allocation of funding, particularly given the challenges for small island developing states in the Pacific. The Strategy hints that it might be about performance (p. 15) but it is not clear. The aid program needs to provide its reasoning in order to make sense of the country program allocations.

A new initiative, ‘Pacific Transformational Projects’, has been created, worth NZ$100 million over three years. Looking at the 2011/2012 country allocations it appears cuts may have been made in country programs to support this initiative. The funds will be for “larger projects [that] are expected to require short-term surges of capital to create high impact ‘game changers’ for countries” (p. 14), based on an assessment of constraints and vulnerabilities. This could be a useful approach, building some flexibility into the three-yearly allocations. For a full understanding of what ‘Pacific Transformational Projects’ entail, the aid program needs to articulate how it will assess constraints and vulnerabilities, the criteria for these projects, how the funds will be allocated across countries and who will decide on their allocation.

Overall, the strategy is an important and welcome addition to the aid program. Greater clarity and articulation would be useful in key areas, as outlined above. This may be provided by the upcoming publication of the Results Framework and Sector Strategies.