A new campaign seeks to write a positive aid policy into the Australian Labor Party (ALP) national party platform. Labor for Aid has three demands that it is trying to get into the ALP National Platform at the 2018 National Conference. To quote:

Putting the Sustainable Development Goals (SDGs) at the heart of the aid program will not make much of a difference. They are so wide-ranging that taking them seriously has few, if any, policy implications. Perhaps there would be less emphasis on the national interest and on economic diplomacy if advancing the SDGs was the core purpose of the aid program, but most things financed by aid can be justified on various grounds.

The first two demands are more significant. They both – the first implicitly and the second explicitly – have the same implication: that the aid/Gross National Income (GNI) ratio would rise under Labor, year on year. How much would that cost? How much is required to see positive movement in the aid/GNI ratio?

Budget costings seem to be calculated for the election year and the following three years, so I assume the costing would be for 2018-19 to 2021-22. Costs are calculated relative to what is in the 2018-19 budget and its forward estimates. The cost in 2018-19 is nothing, as increases only start in 2019-20. I take the latest Consumer Price Index (CPI) and GNI figures and budget forecasts and extrapolate. Detailed assumptions are at the end of this article, and in the worksheet attached.

My estimate is that the Labor for Aid policy would cost $2.2 billion relative to the Coalition’s budget. It’s not cheap. 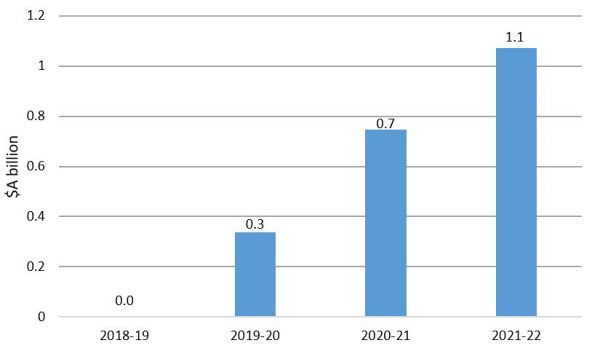 Of course, one could consider smaller annual increases in the aid/GNI ratio than 0.01 percentage points, but that could not credibly be presented as complying with the second of the three Labor for Aid points above. Any increase less than 0.01 percentage points should be regarded as stabilising the aid/GNI ratio. This can also be costed. As per the graph below, stabilising the aid/GNI ratio at its 2018-19 level from 2019-20 onwards would cost $1.0 billion, considerably less. Growing aid in line with inflation is even cheaper and would cost only $511 million.

One can also consider more ambitious targets. Reaching the old 0.5% target in such a short period is out of the question: it would cost $9.9 billion. What about 0.3%, which would get us to about the global average? That would cost $3.7 billion. 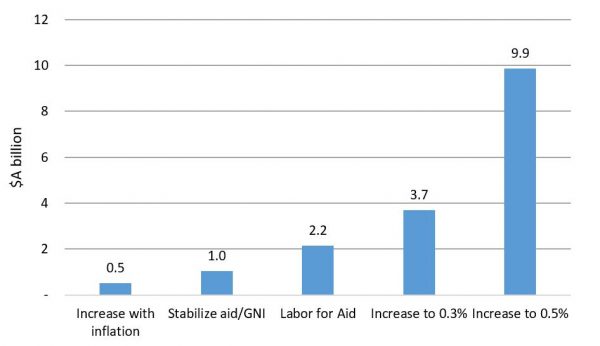 These costs are all large because they are being compared to a Coalition budget scenario under which aid hardly increases even in nominal terms. Year on year, some of the targets look more manageable. By 2021-22, growing aid with inflation would cost an extra $100 million each year; stabilising the aid/GNI ratio an extra $200 million a year; and the Labor for Aid policy an extra $425 million a year (all these compared to the previous year).

One can compare these commitments to what Labor went into the last election with. Tanya Plibersek made various aid commitments, including that she would roll back the $224 million in aid cuts that the Coalition implemented in the 2016-17 budget (a point she reiterated in a pre-election aid statement). There were also promises of additional funding for NGOs ($41.5 million a year) and UNHCR ($450 million over three years). As submitted to the Parliamentary Budget Office, these costings total $798.5 million, or as Plibersek said at the time, about $800 million.

If Labor keeps this aid policy unchanged, and commits $800 million over the forward estimates, then, as per the graph above, it would allow aid to increase slightly in real terms, but it would not be enough to stabilise the aid/GNI ratio.

There hasn’t been much talk in this term from Labor concerning aid volumes. All Penny Wong has been prepared to do to date is call on the Coalition “to join us in a bipartisan commitment to rebuilding Australia’s aid and development programs.” It is hard to see the Coalition shifting from its current position however. While the days of massive aid cuts seem to be behind us, the Coalition has already pencilled into the forward estimates two years (2019-20 and 2020-21) of no nominal increase in aid.

It will be interesting to see how much of an aid volume commitment Labor for Aid is able to generate in the coming year. There is a lot to play for.