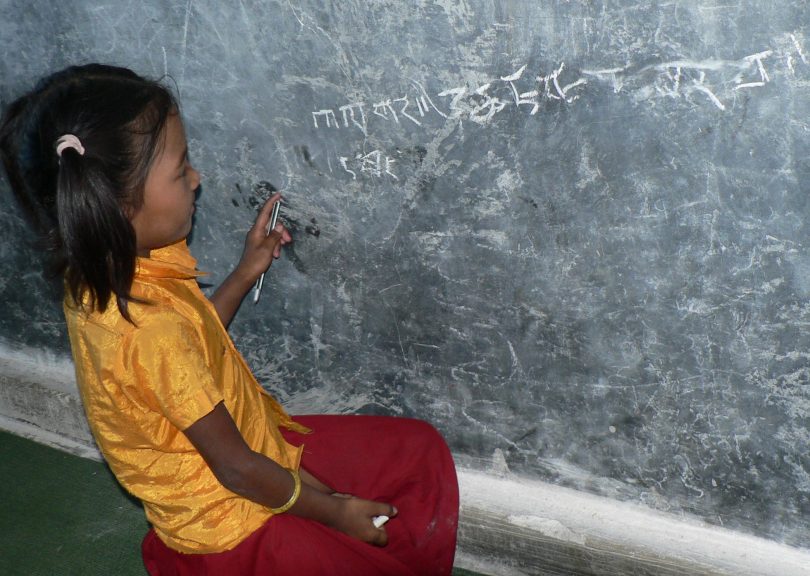 The theme of Australia’s 2017 national NAIDOC week (originally National Aborigines and Islanders Day Observance Committee) is ‘Our languages matter’ – a theme which resonates in community development both nationally and internationally. An urgent need has been identified for language to be included in planning, implementation and assessment of all the Sustainable Development Goals (Study Group on Language and the United Nations, 2016). So why is language important in development, why is it so often overlooked in development discourse, and how can this change?

Why is language important in development?

Language is often a factor in poverty. Illiteracy and pre-literacy highly correlates with poverty, with both economic and social costs (World Literacy Foundation, 2015). Although the causality remains contested, high ethnolinguistic diversity tends to co-occur with topographic heterogeneity (such as the volcanic islands of the Pacific), rapidly growing populations, and low economic growth (Casey & Owen, 2012). This means that marginalised and/or remote communities are more likely to speak minority languages, and the people who most need their voices heard in development research and programming are less likely to be included.

All development partners need their voices to be heard and understood. Development messages, e.g. for disaster preparedness, health, and financial literacy, need to reach all groups, and meaningful dialogue with stakeholders will ensure the sustainability of innovations. For true partnership, this should not always mean the local partners having to adapt to the language practices of the government or donors. The 2017 World Development Report on governance pinpoints the identification of power asymmetries as one of the three key principles in rethinking governance for development (World Bank, 2017).

The health of a language can reflect the health and wellbeing of its users. This is often now recognised in industrialised countries where indigenous language loss contributes to mental health and wellbeing issues (for the Australian example, see Dudgeon, Milroy & Walker, 2014), but it is less likely to be considered in international development contexts. International language loss is occurring at ‘an unprecedented pace’ (Endangered Languages Project).

Traditional knowledge systems are encoded in language. Local languages carry traditional knowledge about the sustainable use of marine resources (for an example from the Marovo Reef in Solomon Islands, see Reef and Rainforest), and traditional ethnobotany is carried through linguistic knowledge of terrestrial ecosystems (for an example from the Venezuelan rainforest, see Zent in Bates et al., 2009). Climate change mitigation is likely to be more sustainable if linked to traditional concepts and practices.

Education needs to be in a language children understand. However, in many classrooms worldwide children are both taught and tested in languages which they do not understand (Pinnock et al., 2011). There is an increasing body of quantitative and qualitative international evidence showing the advantages of Mother Tongue Based Multilingual Education (MTB-MLE) for educational outcomes in all school subjects, as well as for other social outcomes (UNESCO, 2016a). Girls’ education in mother tongues has even more benefits (Benson, 2005). Importantly, a MTB-MLE approach which stages the introduction of a second language (e.g. a national language such as Tok Pisin in Papua New Guinea), and a third language (e.g. an international language such as English) has been shown to also result in higher levels of achievement in those languages since they can transfer concepts learnt in the language they understand best (Benson, 2008). Although it requires extra resources initially, analyses have found that well-implemented MTB-MLE is cheaper in the long term due to higher retention rates and better educational results (World Bank, 2005; UNICEF, 2016).

Why is language often overlooked in development?

Language is central to what it means to be human. Therefore, approaches to language issues may seem obvious and policymakers often do not consider referring to research evidence to back up their decisions.

There is an increasingly powerful global Anglophone elite. The global dominance of English means that ever more decision makers will have been educated in English, and therefore will be able to negotiate in English with multilateral and bilateral donors. English is the only official working language in the ASEAN Charter, and has official status in many countries in the South Pacific. This may be reinforced by comparisons of the outcomes of a nationalised approach to education with a former colonial approach which had foreign-trained and -resourced teachers focusing on producing an elite. The role of English is complex and often controversial (see the articles in Coleman 2011).

How can this change?

Language policy and practice should be based on the same standards of evidence as other areas of development. For example, effective MTB-MLE needs to be a cooperation between policymakers, programme implementers, and community members, and include robust monitoring and evaluation at all stages (UNESCO, 2016b).

It is necessary to focus on the complete picture of costs and benefits of multilingualism. Short-term costs will have long-term benefits. For example, the translation of written materials and interpretation at spoken events will enable more meaningful consultation, and MTB-MLE will result in a better-educated population. Rather than only asking how much a multilingual approach in a particular programme or initiative will cost, it is important to ask what the costs may be if language issues are ignored.

Our languages – more than 7,000 globally, 1,000 of which are spoken in Melanesia – matter, for better social and economic development outcomes.

Hilary Smith is an Affiliate of the ARC Centre of Excellence for the Dynamics of Language, based at the Australian National University.

Hilary Smith has an applied linguistics in education background, with over 30 years of teaching and researching in New Zealand, the Pacific and Southeast Asia. She has lived in Tonga, Papua Guinea, and Lao PDR, and has also worked in Indonesia, Kiribati, Vanuatu, and Solomon Islands. She has carried out shorter term projects in Nepal, Thailand, and Timor-Leste.

Hilary's academic focus is on education in multilingual and developing country contexts, with particular expertise in English language education, and innovative methods for measuring attitudes.

She is an Honorary Affiliate of the College of Arts and Social Sciences at the ANU, Honorary Research Fellow in the School of Humanities at Massey University, and Director of Systemetrics Research Associates.