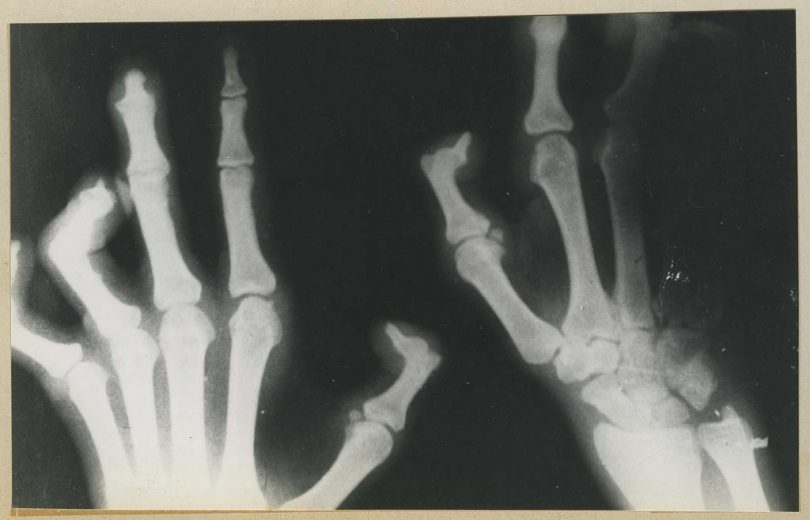 X-ray of a case of leprosy (National Museum of Health and Medicine/Flickr/CC BY 2.0)

At the start of the 21st century, Papua New Guinea declared that leprosy was eliminated.

Eliminated – but not eradicated. With the rate dropping below the World Health Organization’s elimination threshold – one in ten thousand – the nation’s government redirected scarce health money elsewhere. But leprosy never went away. Eighteen years later, leprosy is back with a vengeance in Australia’s nearest neighbour. The dreaded bacterial disease can take years – or decades – to incubate, with steadily worsening disability from nerve damage, such as a hand frozen into an unusable claw. But the historic scourge is now readily treatable with antibiotics, with excellent outcomes if treated early.

Retired GP Dr Colin Martin, the chair of Leprosy Mission Australia, told newsGP that ‘Leprosy never went away in PNG. It’s a complicated place, with all these valleys with poor access… The government is prioritising HIV, tuberculosis and malaria. Leprosy doesn’t seem as exciting. But from an individual perspective, it’s a catastrophic disease due to the stigma, social dislocation and disability it causes.’

Now, leprosy is spreading again, with clusters in poor settlements on the outskirts of the capital, Port Moresby, and in remote villages. The disease is much more common amongst women and children, and is spread through cohabitation.

Logistics is shaping up as a major problem. There are caches of antibiotics stored in major cities, but getting them to remote river valleys or up into the misty highlands can be hugely challenging.

‘A person might walk a full day to a clinic to find that their medications for the next month aren’t there,’ Dr Martin said.

In PNG, the Leprosy Mission helps get people diagnosed and treated and gives vocational training to people with the disease. For people whose disease is caught late, the organisation gives supportive devices, arranges reconstructive surgeries and even supplies sunglasses for sufferers who have lost the ability to close their eyes.

Rosa Koian is a project manager with the Leprosy Mission Papua New Guinea. She said their Port Moresby operation had seen around 400 new cases in recent years. ‘A lot are undetected,’ she told newsGP, ‘We’ve identified children who don’t want to go to school because their teachers thought they might pass the disease on to the next child. We’ve got four of those back in school… Papua New Guineans live in crowded conditions. People with leprosy live in with their families – and that’s how the bacteria spreads. We have some families where the whole family has it.’

When Rosa or one of the organisation’s 52 fieldworkers suspects someone might have the disease, they encourage them to visit the clinic.

‘Some are scared, some are shy when they’re diagnosed. They don’t want people to know. Some don’t know what to do,’ she said. When Rosa finds someone who looks to have the disease, she goes with them and sits until the doctor comes. While they wait, she tells them the good news. The disease is curable – if treated early, before permanent nerve damage occurs. ‘If we treat it as early as possible, I believe we can turn this around,’ she tells them.

Dr Martin is cheered by the news that the World Health Organization is ramping up efforts to tackle neglected tropical diseases (NTDs), with leprosy among the diseases in their sights. ‘In terms of disability adjusted life years, neglected tropical diseases outnumber AIDS and tuberculosis. But they’re out in poor countries where no one sees them, and they’re not epidemics like HIV and they don’t kill like TB does,’ he said. ‘Once you get multidrug therapy, you stop being infectious in 48 hours, and in a year, you’ve cleared it. You’ve done the job. If you get in early before disability develops, you’re cured. But if you turn up with a clawed hand, you’ve got a disabled person for life.’

This article originally appeared on newsGP and is reproduced with its permission.

Doug Hendrie is the Associate Editor of newsGP.