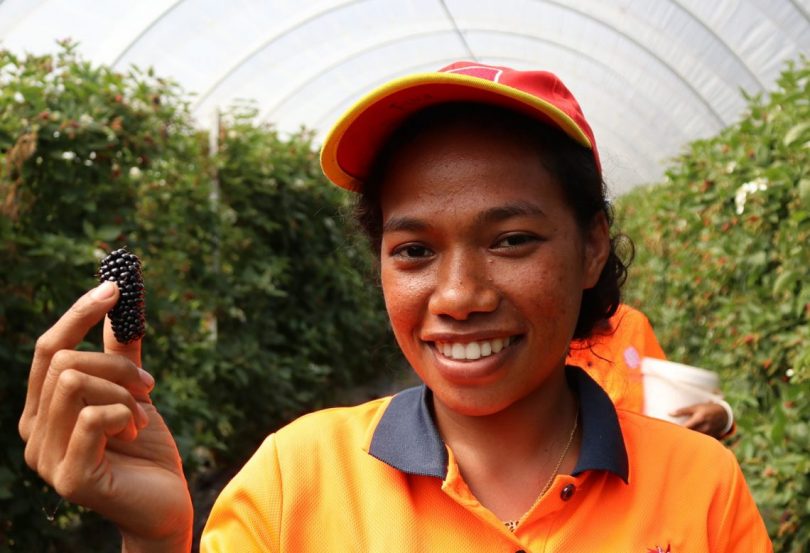 A seasonal worker from Timor-Leste picks berries in Australia (Department of Foreign Affairs and Trade/Flickr CC BY 2.0)

In late July, Good Will Hunters’ Rachel Mason Nunn sat down with Jemma Mackinnon and Kerry McCarthy, two Approved Employers who have been engaged in the Seasonal Worker Programme (SWP) for some time. Here are some edited highlights from their discussion, available as a podcast here.

Kerry and Jemma recruit seasonal workers from Solomon Islands, and Tonga and Timor-Leste, respectively. Participation in the program has been beneficial for both employers.

Kerry: We only started off with two workers at the very beginning and a small family farm … We have expanded and grown our business over the years, only because we know we have a reliable workforce that will show up to work every day when those workers return. Giving us the confidence, as I said, to expand, to try new things, knowing that we’ve got people that will hit the ground running every day. And have as much enthusiasm for our own farm as they do. They’re very proud of the work that they do. Doing the right thing, and being productive, and pleasing us is very important to our workers. And, you know, you just don’t get that anymore. It’s just beautiful.

For Jemma, access to the “return, reliable, trained workforce” the SWP affords has also helped to grow their business and create domestic employment opportunities.

Jemma: Before we had the Seasonal Worker Programme, we were half the size we are, and we had a turnover of 400 staff. Now, this season, the season just been, we had 120 workers, and we’re double the size we were four years ago. So, we have a local cohort of about 45 per cent, and then our seasonal workers with that. And there is no way that we would have been able to expand the way we have and employ the local workforce that we do without the seasonal workers.

It’s also a great opportunity for the workers.

Kerry: [Visiting and staying with our workers in their remote villages] we have seen … the economic benefit to these workers. Especially being so remote, job opportunities over there are very scarce … it’s like winning the lotto for them, the opportunity to come here. So, the wealth is spreading. They’re employing neighbouring workers from other villages to come and assist them with manual labour … Very much investing in their community church and the community school. And … they’re learning so much here. They’re taking back ideas. We have a very big chat with them about what they’re going to do in the future, planning for the future. And some of those kids in that village school, they’re specifically going to school – a greater [roll call] turning up every day so they can learn English and come and work in Australia. So, bringing a lot of hope to those very isolated rural communities. It’s wonderful … it is like winning the lotto, you know? It’s just an amazing opportunity. There are thousands and thousands of workers wanting to come to Australia. So, the opportunity to be chosen and to actually succeed in the program and be a return worker is life-changing for them.

Jemma: In Timor, they have about 20,000 people on the list, and that was out of one recruitment drive that they did two years ago, or a year and a half ago now … and from Timor, coming to Australia, I think there’s about 1,000 workers a year, maybe a little bit less. And most of them are return workers. So, when you’re looking at a list of 20,000, waiting for that opportunity to get chosen is as you say, like winning the lotto.

COVID-19, and the resulting border closures, restrictions on domestic movement, and ongoing uncertainty, have challenged many seasonal workers, and their employers.

Kerry: There was a lot of extra work for Approved Employers to care for those workers. Mental health issues, talking about the workers’ welfare to begin with. So, they are stuck in Australia. They cannot get home. And they’re getting phone calls from home, “Please come home” … [it’s been a] very emotional, huge emotional, rollercoaster for those workers. So, very difficult times for employers and workers. Some workers have been repatriated home. Some countries have not offered flights home at all. So, [it’s] out of our control, out of the workers’ control, and that’s a really big issue. A lot of work has been done by Approved Employers to redeploy workers … A lot of red tape with that movement has restricted it flowing really, really well, but we’ve tried to cover the workers as much as possible and offer them alternatives.

Jemma: We’re quite a tight-knit community down here [in Tasmania]. There’s a group of about five farms who have seasonal workers … We had about 450 workers with us all, and we managed to send them all up to the mainland to get them work, which was a huge effort … That hasn’t come without issues, both from the administration of the program and the red tape that we had to go through, and just the extra information that we have to give, which seems completely pointless. And then, once their contracts have finished over the winter, they hopefully will come back to us in the summer to complete another season with us. But we’re anticipating that’s going to really be a drain on them, because they will have essentially, by the end of their contract with us, they’ll have worked for 18 months straight … it’s going to be a difficult ride. They’re already seeing them lethargic, mental health issues. And as Kerry said, the drain on not only them, but us as Approved Employers, is huge.

The welfare of seasonal workers is closely scrutinised and has received a fair deal of media attention of late.

Kerry: I think the workers should speak for themselves. You will always have the situations where something has gone wrong … But the program is so important to us … We appreciate our workers, we value our workers, and our workers just, as I’ve said, this opportunity is gold to them.

Kerry argues there are bigger, industry-wide issues at play affecting both the uptake and reputation of the SWP.

Kerry: One of the biggest hindrances to the expansion of the program, apart from a lot of bureaucratic red tape, that a lot of employers aren’t willing to confront … is illegal cash labour in Australia from illegal workers … We really need to clamp down on this industry and we need the Australian government to take it seriously. It’s impacting the reputation of the Seasonal Worker Programme … it’s not fair on farmers who are paying the correct wage, and it’s not fair on the workers who don’t get that correct wage and who don’t get the protection that they would being legally employed. So, a lot of vultures out there doing the wrong thing and encouraging illegals to work for them, and we really need to get rid of that industry to begin with. Then we will see the Seasonal Worker Programme grow, the Pacific labour mobility programs grow with confidence, and a lot of this chat about terrible treatment of workers may go away because you may find that a lot of those workers are not working legally to begin with.

Listen to the full Good Will Hunters podcast with Jemma Mackinnon and Kerry McCarthy here.

Kerry McCarthy and her family own a vegetable farm on the Darling Downs in Queensland and have been employing workers from Solomon Islands under the Seasonal Worker Programme since 2012.

Rachel Mason Nunn is CEO of Good Will Hunters, an aid and development podcast.