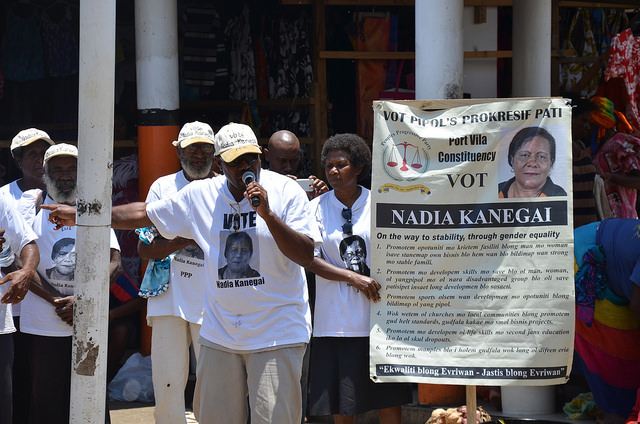 My journey started in 2008, when I sought the endorsement of community leaders in my home island of Tanna to contest the Vanuatu provincial elections. I didn’t get their approval. I was told it is against kastom (custom, traditional culture) for women to be in parliament, and that I wasn’t prepared to take up such a challenge. I tried again in 2012, this time paying my candidate fee without the approval of the community chief. When the community leaders learnt of this, they organised a meeting to stop me from contesting. They asked that I give up my candidate fee to a male candidate of their choice, promising in return that they would support me in the 2016 national general election. I respected their decision and gave my ticket away. Their male candidate failed to win.

In 2015 Cyclone Pam devastated Vanuatu, with Tanna being one of the worst-hit islands. Women bore the brunt of the devastation, forcing them to seek out new ways to survive. A realisation began to dawn that it was time for them to stand up and speak for themselves. After numerous meetings with women groups, the first ever Tanna Women’s Forum was held in October 2015. Over 1,200 attended the meeting where women demanded change to a political system that held them down, tied them in poverty, and gave them no opportunity to speak out. It was a breakthrough moment as many of these women have lived under threat all of their lives.

The women put their heads together and agreed it was time someone took the lead. I was nominated. The women agreed that I would contest the next general election scheduled for late 2016. Just days later the government announced a snap election, effectively wiping out our time to put together an election campaign. We moved ahead anyway with membership numbers now standing at 3,700. We had much confidence that we would secure one of the seven seats in the Tanna open constituency.

With very little time to prepare, I took on the challenge with much confidence. That as a solid membership of women we could succeed, and that even if we failed to win a seat, we would learn valuable lessons from the snap election experience that would better prepare us for the next general elections in 2020. I had so much confidence. I wasn’t thinking of losing; our hopes based on the registration figures signed by women across the island.

The first obstacle was informing community leaders of our decision to field our own candidate – a woman. Working with a chief that I have close ties to, a community meeting was arranged whereby I would declare and launch my candidacy. No one uttered a word, except a female friend who stood up, and much to my surprise, said, ‘I am not in support of women being electoral representatives in parliament, and I am also against the policy of reserving seats for women’. I took this understandably as coming from someone speaking from her heart, but it also confirmed that the notion that women ‘do not belong in parliament’ were not held by men alone.

With no financial backing (other than two small personal contributions totalling 15,000 vatu) I had to dig into my own pockets to fund the campaign. I must say the election process is very expensive, with transportation in Tanna costing 20,000 vatu per day. We hired six public transport vehicles for the campaign.

We managed to visit (and revisit in some cases) 19 communities, speaking with roughly 700 men and women. Our slogan was Hemi Taem! (It is time!).

Taking centre stage during the campaigns was the most challenging. The questions and comments raised by communities were not difficult to answer, but there were also tricky ones coming from those who perceived us to be defying kastom.

You have not killed a fly or an ant, how can you prove that you can work like men in parliament. You are nothing but a woman.

Our custom and culture perfectly points out your place – which is to look after the children, and mine (male speaking) is to do the talking. Where is your respect for this kastom? Are you from Australia that you don’t know our kastom? Who has given you this right to contest?

Maybe we can vote for you in the provincial council election, but not to parliament.

Our fear right now is the domestic violence law; we do not want our women to take those laws into their own hands.

We don’t want to vote for women, because we don’t want women to have the right over us men.

We don’t want our women to vote for women. If they do, we will divorce them.

In a lot of places, prior to our campaign meetings, there would be community meetings most held in the nakamal (traditional meeting place) where ‘consensus’ was often reached for all community members to vote for a particular candidate. In some cases, I wasn’t allowed to go and campaign – even to speak to just the women. In one case, some women called me and said, ‘Mary, please don’t come to our community as you will not be allowed to speak here’.

Discrimination and the threat of violence

The campaign revealed that culture is a main contributor to the limitation of woman’s influence in politics. I’ve seen how a lot of people are reluctant to vote for a woman. We did not receive discrimination from men alone, but women also. The discrimination we received was more on emotional violence. Discrimination against women in the society was very obvious at the time of campaigning and we observed how discrimination was somewhat based on a woman’s age, her marital status, her level of education and economic status. And as such, a woman may not be considered to be valuable or worthwhile if she does not fit the collective representation of both men and women.

Personally, I was able to endure a male-dominated political campaign period, but stories of threats of violence experienced by some women have just been unbearable. There are many of such accounts, ones that I share with a sad heart. This is one woman’s account of the threat she received from her partner the night before the poll.

I was already in bed pretending I had fallen asleep for some hours, but my husband came up and woke me up. He held a knife to my throat and demanded that I tell him who I was going to vote for. I was so afraid, I did not speak. He told me to speak or else he would beat me. I started crying. I was short of breath and was shaking. I cried out, ‘please help me … someone listening outside, please help me!’ But nobody came to my rescue because they were afraid of my husband. He pushed me down, punched me again on my stomach and head, and said he was giving me a chance to speak or else he would beat me up. He knew of my intention to support women in this election. I begged him to let go of my throat or I was going to die, and I promised him that I was going to vote for the candidate of his choosing.

Another woman also had a similar story.

I saw you talking with those women, but I have stated clearly stated my rules and you have to follow them. We are going to vote for a male candidate and not for any woman. If you fail my words and I find out the numbers at our polling station, I will make you pay for it.

Other women were reportedly threatened by their partners to show candidate photos after they had cast their votes to prove they voted for a particular candidate. In some polling station, men threatened to divorce or physically torture their wives if results showed a significant number of women’s votes from that particular polling station.

Political parties, as we know, are the most important institutions affecting women’s political participation. Even though our group knew we could have more support (moral and financial) from political parties if we ran under one of them, we still made the hard choice of running as an independent candidate. We had a few reasons for this, with the main one being that bigger political parties filed their candidates in advance, leaving no space for women to contest under their ticket. Secondly, women still have a long way to learn about the processes and lobbying involved in politics.

In spite of the challenges women continue to face, I see a new generation of powerful women flourishing in Tanna. Women with a strong sense of identity and power. Through our journey, many have come to understand that participation in the electoral processes involves much more than just voting. It is time to exercise the democratic rights that have either been ignored or violated over the last 36 years. Through our journey in politics, many have come to appreciate that through political participation women can have the freedom to speak out for the first time in the island’s history, which they’ve done through campaigning, assembling, associating and participating.

I have seen the power of ordinary women who have stood up against injustices to say they are tired. I have seen the faces of those who shed tears because of so much ill-dealing and threatening within their homes and communities. We have started a journey where we will continue to celebrate the united power of women who have taken the first steps to uncovering the multiple forms of discrimination and injustices. We shall continue to seek the empowerment of women to a level where they can think and speak for themselves.

Mary Jack Kaviamu has over ten years experience working with provincial government, which included a period as acting secretary general of the Tafea Provincial Government Council. Mary worked at PiPP from 2010 to 2015 to implement a programme of political stakeholder engagement in Vanuatu. She is currently a Manager for ActionAid.

Mary Jack Kaviamu has over ten years experience working with provincial government, which included a period as acting secretary general of the Tafea Provincial Government Council. Mary worked at PiPP from 2010 to 2015 to implement a programme of political stakeholder engagement in Vanuatu. She is currently a Manager for ActionAid.