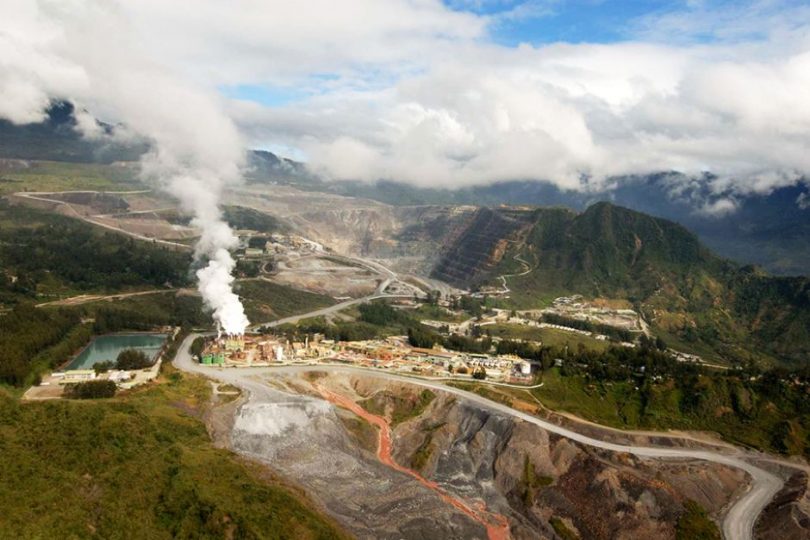 Papua New Guinea’s government depends almost entirely on tax revenue received from various sources including taxes on income, profits and capital gains, taxes on payroll of workforce, taxes on goods and services, and taxes on international trade and transactions. Tax revenue serves as a direct measure of economic activity and the well-being of citizens. In our earlier blog post, almost a year ago, we argued that the decline in tax revenue was indicative of a recession, or more specifically a decline in non-resource GDP. In this blog, we update and expand on those claims.

PNG is heavily reliant on natural resources. It is no surprise that mining and petroleum taxes have declined with the drop in commodity prices. It is surprising that the decline in revenue has been so severe (Figure 1). New resource projects are not paying taxes due to tax holidays (Ramu Nickel) or accelerated depreciation (PNG LNG). Further research is needed to determine the reasons for a lack of tax from older gold, copper and oil projects. 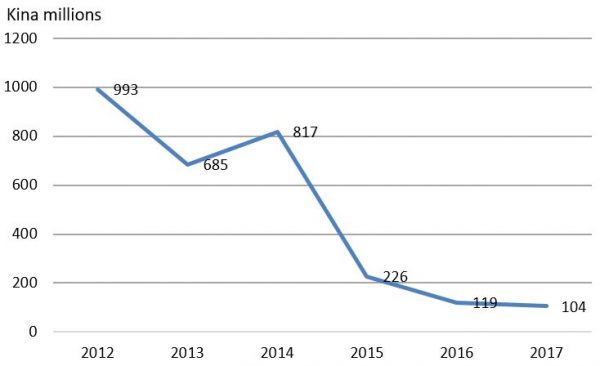 Source and notes for this and subsequent graphs: PNG Budget Database; 2017 revenue figures are estimates and are from the MYEFO.

Tax revenue in the non-resource sectors

Most of PNG’s population is engaged in the non-resource sector. Three different non-resource taxes support the argument of a decline in the economy.

Income taxes, corporate taxes (excluding from resource companies) and GST all increased from 2012 to 2014, but have declined since in nominal terms (Figure 2). The tax on goods & services is perhaps the best indicator of the health of the economy. Its decline from K1,669m in 2014 to K1,443m in 2016 is strong evidence that the economy has been in a recession.

The latest estimates for 2017 show a slight pick up in nominal terms in these three taxes summed together but at less than the rate of inflation, resulting in an ongoing decline in real terms (Figure 3). 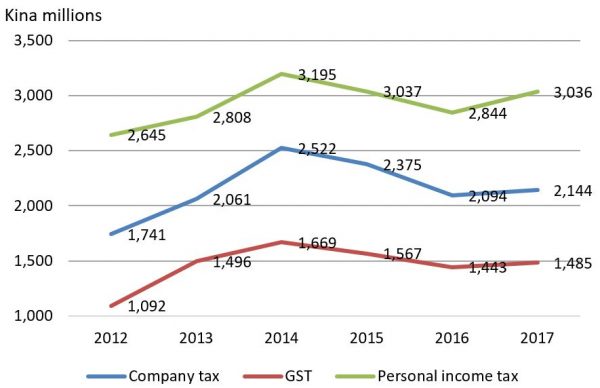 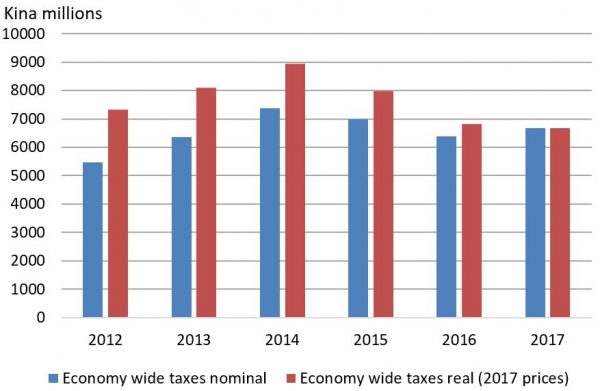 An alternative explanation for the decline in revenue is falling tax compliance. It is possible that there was a one-off decline in compliance with the end of the construction of the PNG LNG project. In general, however, there is no reason to think that tax compliance has continue to fall. The budgetary allocation to the Internal Revenue Commission (IRC) has been on an increasing trend since 2012, even after inflation (Figure 4). Discussions with IRC management and advisers suggested that compliance levels have, if anything, been increasing, due to increased funds and capacity. We were told that IRC staff had increased from 324 in 2013 to 660 currently. 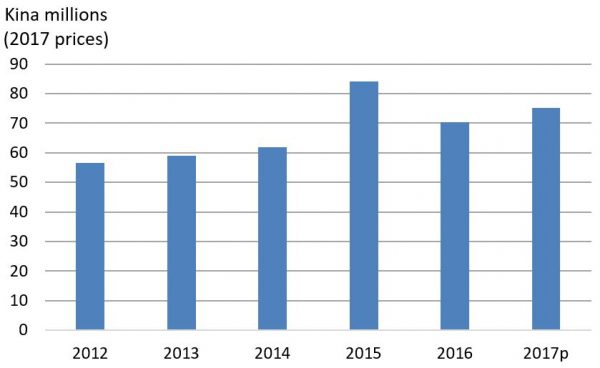 The increase in staffing capacity by IRC (doubling the number of staff), together with government pressure to boost revenue make it highly unlikely that the story is one of falling compliance. It is much more likely to be a story of falling output.

Finally, we can look at the ratio of non-resource taxes to non-resource GDP. Figure 5 shows a steep decline from 30% in 2014 to an estimated 21% this year. While the ratio clearly does fluctuate, and some decline would have been expected with the ending of the PNG LNG project, it is hard to imagine why the decline should be so steep and persistent. This also suggests that official output numbers are too optimistic.

Figure 5: Economy-wide taxes as a ratio of non-resource GDP 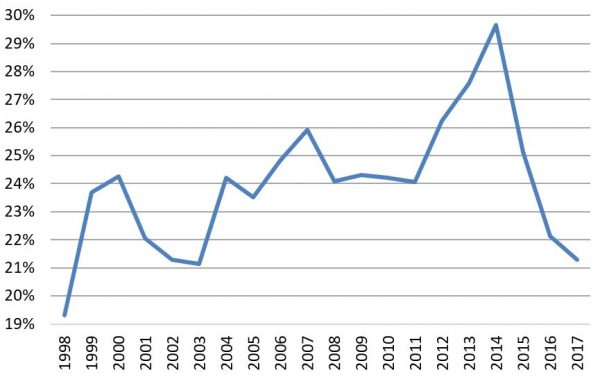 In conclusion, this further analysis confirms our earlier argument that the data suggest a slow down in economic activity in 2015 and 2016. The alternative explanation of falling tax compliance is not convincing. The tax data is more positive for 2017, but even here the fact that the three main economy-wide taxes summed together are growing by less than the rate of inflation suggest that the recession has moderated, rather than a resumption of economic growth.

This post is based on the 2017 PNG Economic Survey, co-authored by Rohan Fox, Stephen Howes, Nelson Atip Nema and Marcel Schroder.