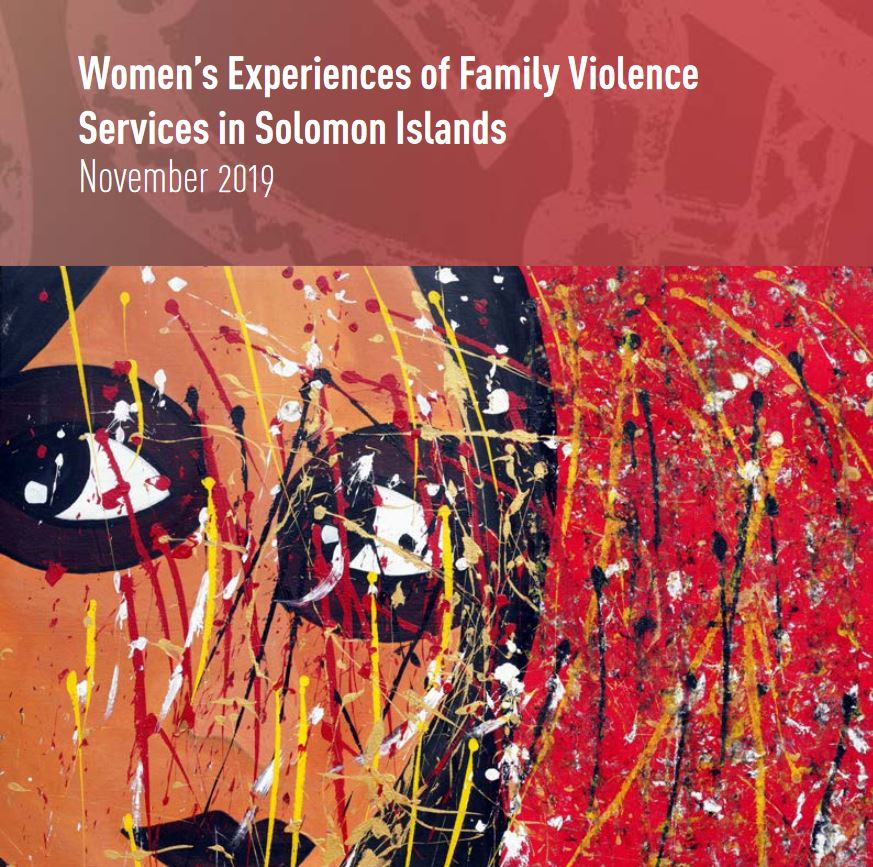 By Anouk Ride and Pauline Soaki

In April 2019, a research team set out to five provinces to talk with rural and urban women who had used, or tried to use, these services. We sat with women under trees, in homes, markets and offices and asked them whether they were satisfied with the help they had received from family violence services and whether they felt more or less safe as a result.

The results are in a report launched on 26 November 2019 entitled Women’s Experiences of Family Violence Services in Solomon Islands. Three years into the FPA, the results reveal the perspectives of 126 service users across five provinces (around 10 per cent of all women who used family violence services during the period), plus 24 service provider staff.

The report has data on many services, but the service that had the greatest impact on violence perpetrators was the police. Under the FPA, the Royal Solomon Islands Police Force (RSIPF) is authorised to issue PSNs, which are valid for 21 days and provide a set of rules for violence perpetrators. PSNs are a tool that have the authority of RSIPF and the courts, without being as lengthy in time and legal proceedings as Protection Orders issued by the courts or arrests and criminal cases. Over 1,000 people have used PSNs since 1 January 2017, although 47 per cent of this use is in Honiara and some provinces have had slow uptake of the system.

What is clear is that PSNs are a useful service: women like the idea of a strong warning and protection without having to go to court and, in most cases, this improves the safety of women and leads to perpetrator behaviour change. The problem is that of all women going to police stations, not enough are provided with information or action on PSNs (or indeed other options for arrest and prosecution).

The majority (70 per cent) of women who had PSNs issued by police were satisfied with the service and felt safe. Others faced further difficulty because violence continued, and action was not taken by service providers, and/or other influencing factors played a role (notably pressures to stay with violent husbands due to lack of financial autonomy, or pressure from in-laws and the woman’s own family often stymied women’s use of services).

There are many testimonies from women about how PSNs led their husband, brother or son to stop being physically violent. The majority of women who got PSNs ended up staying with their husband, or other family member who had been violent, and reporting no subsequent violence, due to perpetrator fear of further police action and a realisation of the consequences of violence. In other cases, the PSN allowed women to separate from violent partners or family members. The most often cited benefit of PSNs was that women felt safe to resume normal activities, such as walking their children to school or selling their food at roadside markets.

The reasons why police are not giving information on or actioning PSNs are various and include: a lack of understanding of the FPA system among officers; gender norms and negative attitudes encouraging women to ‘come back if its serious’, to reconcile with husbands, or to not bother police with family issues; a lack of police resources (particularly computers and transport); and, lack of willingness of officers to get involved in unknown families’ issues (if a woman knew a police officer she was more likely to have a positive experience, if her husband was friends with police officers she was more likely to have a negative experience). Other services, notably initiatives by the Ministry of Women, Youth, Children and Family Affairs, Seif Ples (a national referral centre and 24-hour refuge), and NGOs Family Support Centre and Christian Care Centre, are encouraging women to use PSNs when appropriate and actively helping women to request these from police stations.

Recommendations in the report were endorsed by the service providers involved in FPA implementation, and the research process included many productive discussions with service providers about what has been achieved so far, and how much more there is to do. The next 12 months will be critical as government conducts its own statutory review of the FPA and assesses performance to date, and the RSIPF conducts its own progress reviews.

Increasing the uptake of PSNs can be considered a useful investment in violence prevention and changing norms of violence that have led to Solomon Islands high rates of violence against women and girls. Among the stories of hope in the report, is the comment by a young mother of two children, aged 15-29 years, “The police report has made a big difference in the lives of my husband and myself. My husband has changed and we live happily together.”

Dr Anouk Ride and Pauline Soaki are co-authors of the report and are both gender and social inclusion consultants working in Solomon Islands. The report, Women’s Experiences of Family Violence Services in Solomon Islands, is available here.

Anouk Ride
Dr Anouk Ride is a Scientist at WorldFish in Solomon Islands.