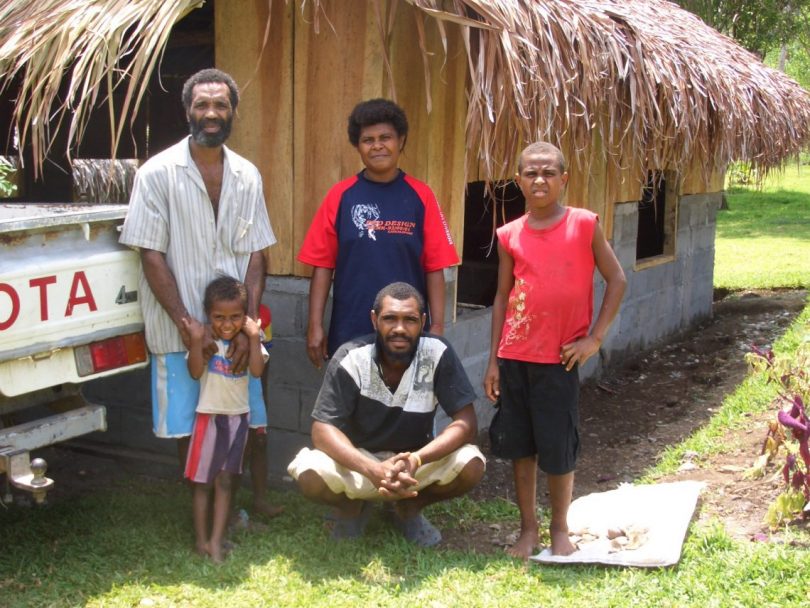 This is the third in a series of blogs outlining key findings from the Impact Study of New Zealand’s Recognised Seasonal Employer (RSE) scheme. Over 150 RSE workers and family members were interviewed in their home villages across five Pacific countries with the aim of better understanding the contribution the RSE scheme makes to participating households.

Every year, thousands of Pacific families make the decision to send a worker to New Zealand for seven to nine months of horticultural work under the RSE scheme. As in many parts of the world, migration in the Pacific is embedded in an extended family context, and the decision to participate in the scheme is linked to the needs and aspirations of the household. ‘Behind’ each RSE worker who arrives in New Zealand is a partner, children, parents, in-laws, extended family members and those living in the same village/community, all of whom may be affected directly or indirectly in their daily lives by the worker’s absence.

For RSE households, the decision to take part in the scheme is a trade-off between the financial gains from savings (including remittances) and the social costs of extended periods of absence. Regular separation of workers and their families is often justified on the basis that RSE savings enable the family to fulfil a particular project, whether it is putting children through school, building or renovating a house, or investing in agriculture or other small businesses.

Notwithstanding the financial gains that come with a regular and reliable source of cash, the social costs of labour mobility for RSE workers and their families are high. While the RSE worker is away, their partner or other family members play a critical role in maintaining the household, and have to assume additional responsibilities e.g. child care, elder care and food production.

The ability to cope with these additional roles is often mediated by the availability of a support network – either through extended family or local community members – who can assist during the worker’s absence. The family’s access to RSE remittances and savings can also influence the extent to which the family can replace the absent worker’s usual contributions in the household (e.g. to agricultural production).

Family separation year-on-year may have detrimental effects on marriages and family relationships, and on the welfare of workers’ children who may miss significant periods of parenting by one or both parents. A consistent theme expressed by workers during interviews was how much they miss family at home, especially their children, when working in New Zealand.

For RSE households, staying in regular contact via phone and social media is an essential means of reducing some of the emotional costs of separation, and enables absent parents to continue performing a parenting role.

But staying in contact can be expensive. Some RSE employers/accommodation providers offer workers access to high-speed Wi-Fi free of charge, while others charge for access to their Wi-Fi networks. Most RSE workers use mobile phones for their communication and the costs of plans are expensive relative to workers’ earnings. For instance, a NZ$20/week mobile plan over a seven-month period costs NZ$560. This is a significant sum of money for an RSE worker whose earnings are pegged to the minimum wage (currently NZ$18.90/hour).

Variable mobile data access and coverage across Pacific countries can create additional difficulties for families trying to stay in touch. Workers and their families stressed the importance of maintaining regular contact, despite the costs involved in doing so.

Linked with the social costs for families are the difficulties for workers to return home during the season when there are family emergencies or important cultural events. The RSE Limited Visa is a single-entry visa costing approximately NZ$290. If a worker needs to return home during the season, s/he must apply for a new visa to re-enter New Zealand. This is a time-consuming and expensive process which can be prohibitive for workers.

There is also the risk that the employer may wish to terminate their contract early if the worker decides to return home. When informants were asked about how the RSE scheme could be improved, the most frequent request was for the current single-entry visa to be replaced by a multi-entry visa along the lines of the visa available for workers in Australia’s Seasonal Worker Programme.

The Impact Study identified several ways the RSE scheme could be made more family friendly from the New Zealand end, through improved connections and communication with family at home:

Pacific governments can play a greater role in supporting households with seasonal workers absent in New Zealand or Australia. Support measures could include:

With the advent of the COVID-19 pandemic in 2020 and associated border closures, efforts to support RSE workers and their families have taken on greater significance. Around 7,000 RSE workers were still in New Zealand in early October 2020, many of whom had already been in the country for seven to 12 months. The strain on RSE workers and their families is reportedly high as they cope with unexpectedly long periods of absence and the uncertainties of when workers will return home.

COVID-19 presents an opportunity for the Ministry of Business, Innovation and Employment and for Pacific governments to rethink aspects of the RSE scheme’s operation. Making the RSE scheme more family friendly is one area that deserves greater attention and would be an important step towards creating balance in the delivery of RSE scheme’s core objectives of providing positive outcomes to New Zealand and participating Pacific countries.