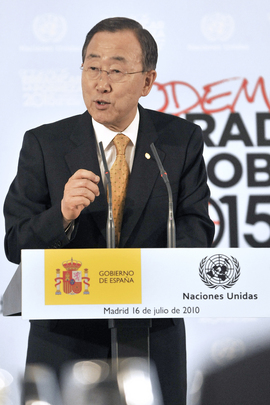 The UN Summit on the Millennium Development Goals (MDGs) has come to a close. World leaders have returned home, or moved on to their next international meeting. Government and UN agencies are taking stock of new commitments and working out how to deliver on them. Civil society groups are drafting new advocacy strategies, and developing plans for holding the world to account on new promises.

As the dust settles on the Summit, what is the read-out?

1. Progress made, but a long way to go

Much of the work in the lead-up to the MDG Summit focused on identifying what had worked, and why. Early on, the UN machinery made a commitment to using the momentum of the MDG Summit to learn lessons from the past ten years and identify concrete strategies for accelerating MDG progress to 2015. Governments, NGOs, research institutes and think tanks followed suit. The result is more reports than you can fathom and a new body of evidence on what drives progress on human development.

The Guardian’s new Global Development website has helpfully collated key reports on MDG progress. Jonathan Glennie, my colleague from the Overseas Development Institute (ODI), reviews these reports and provides a three-point summary of what, taken together, he thinks they are saying.

i. There has been decent progress towards the MDGs in the first decade of this century.
ii. Progress has been unequal, with the poorest losing out.
iii. The MDGs take the politics out of development, including political and civil rights (gender rights being the exception), and issues such as equality and land distribution.

The data presented in the MDG Report Card, published by the ODI, is very much in line with these points. It goes beyond standard global and country-level assessments to provide insights into how these gains are being shared across income, rural-urban and gender groups.

The outcome document of the Summit, Keeping the Promise: United to Achieve the Millennium Development Goals, is what the UN has described as a ‘global action plan’ to achieve the MDGs by 2015. It is a long list of priorities for accelerating progress between now and 2015, which has been informed by a number of MDG progress reports.

In his closing remarks at the Summit, UN Secretary General Ban-Ki Moon outlined the key issues covered in the outcome document. These include jobs (especially green jobs), the need for a successful Doha trade round outcome and inclusive financial services. Smallholder farming, food and nutrition security, women’s health and empowerment were also mentioned. A rejuvenated global partnership (which refers to the critical, but often sidelined, MDG 8) was also emphasised.

A series of new aid commitments were made at the Summit. The most prominent was the US$40 billion Global Strategy for Women’s and Children’s Health.

Education also received attention. Former British Prime Minister Gordon Brown has thrown his support behind education, becoming the convenor of the high-level panel for the Global Campaign for Education. Foreign Minister Kevin Rudd, in his statement to the UN General Assembly, committed the Australian aid program to $5 billion of spending on education between now and 2015.

3. The proof is in the pudding

What will this all amount to? There is evidence of real progress, across a range of MDGs, in a range of contexts, in a range of countries. We know more about what works. For example, sustained and innovative programmes on health, education, water and sanitation and, of course, climate change, are important.

But there is increasing evidence that supporting what the ODI has called the MDG fundamentals – equitable economic growth, gender equality and social protection – will best support progress across the MDGs. As evidence emerges that three quarters of the world’s poor now live in middle income countries, equity – and the distribution of resources and opportunities within a society – need to be central to our approach (see UNICEF’s compelling case for taking an equity approach to the MDGs).

My colleague Liesbet Steer argues in her blog that there was a feeling of optimism at the Summit and that ‘even with all the hot air, the egos, the chaos, and the UN inefficiency…something rather important was going on’. The polarised debates will continue. Jeff Sachs will keep arguing that the MDGs offer a realistic path to tackling extreme poverty. William Easterly will keep arguing that the MDGs support a failed official aid approach to global poverty.

I’m with ODI’s Director Alison Evans on this. While it is easy to criticise the MDGs, and the framework has its flaws, they have mobilised unprecedented support for global poverty reduction. Five years from 2015, we need to acknowledge the value of the MDGs, face up to their strengths and weaknesses and use evidence to inform next steps. In doing so, and keeping our promises, I think we can accelerate progress on the MDGs.

Kate Higgins is a Research Fellow with the Growth and Equity Programme at the Overseas Development Institute. She is based in Sydney.

A version of this article was first published here in the Lowy Interpreter.