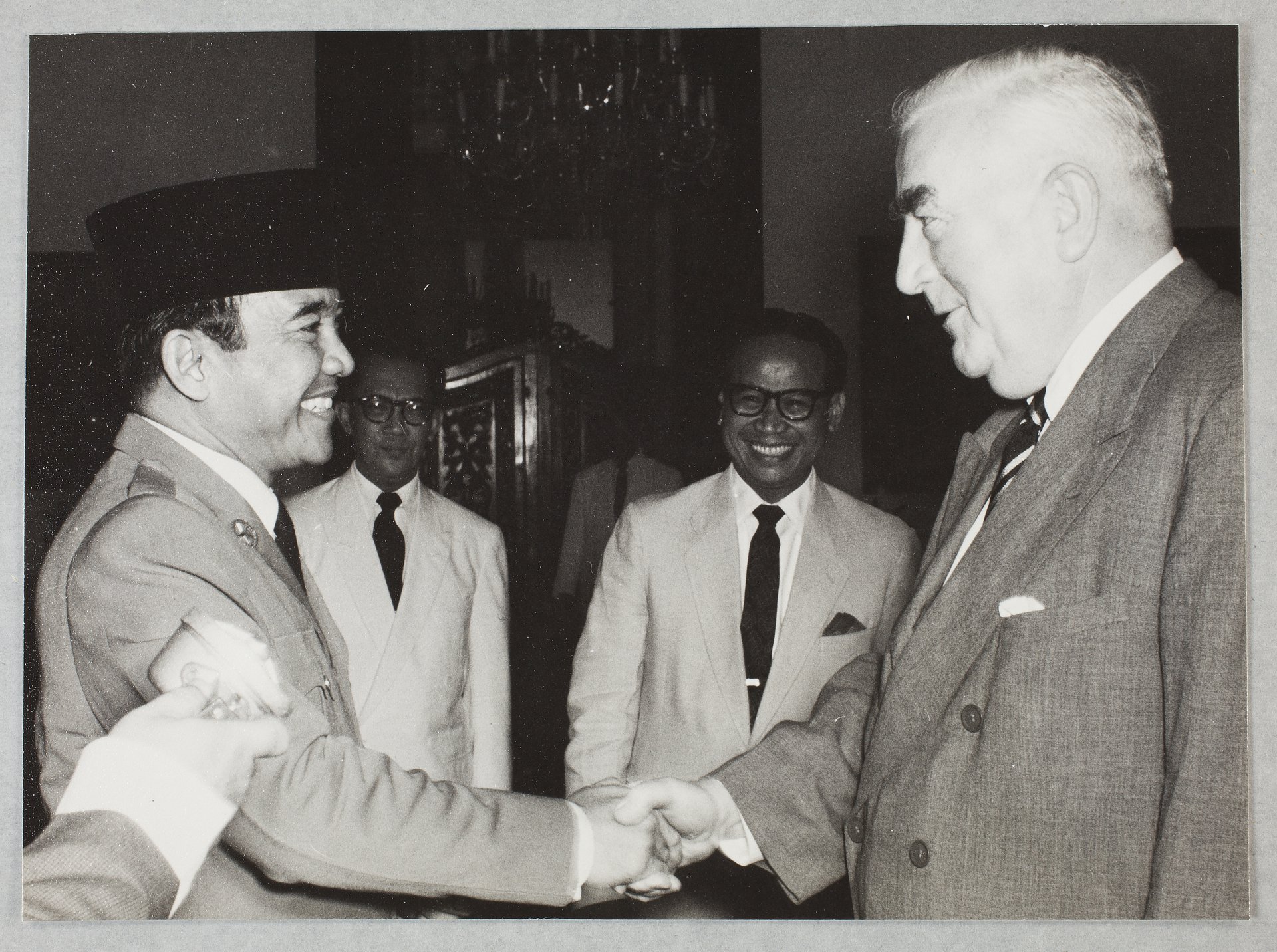 Conventionally, and for good reasons, the ratio of aid to Gross National Income (GNI) is the principal measure of a country’s generosity as a provider of foreign aid.

Based on the economic growth forecast contained in the government’s December 2016 Mid-Year Economic and Fiscal Outlook, Australia’s 2016-17 aid budget of $3.8 billion is estimated to amount to 0.22% of Australia’s GNI. That’s 22 cents in every $100, lower than ever before.

If we extend the same graph back several decades, though, the twenty-first-century hill seems more of a hillock. Considerably higher levels of generosity were seen during the 1960s and 1970s. How much higher, exactly?

Trust me, I’m from the OECD

Answers to questions of that kind are often drawn from Organisation for Economic Co-operation and Development (OECD) aid statistics because they are readily accessible, allow for easy comparisons between donor countries, and are presumed to be authoritative. In addition, the OECD holds information on Australian aid levels in the 1960s that is not easily found in Australian government publications.

World Vision Australia’s Chief Advocate, the Reverend Tim Costello, was relying on OECD aid statistics when he said, in December 2016:

Aid was at its highest under Menzies, at 0.5% … when per capita income was much lower.

So was the Sydney Archdiocese of the Catholic Church when it issued a statement two years earlier, condemning aid cuts and saying:

Ditto The Guardian a year before that, when it said:

The OECD statistics on which these various commentators relied, it turns out, are incorrect. Based on the Australian government’s own data, the highest aid/GNI ratio seen under any Australian government since annual reporting began was actually 0.48%. That was in 1967-68 under three Prime Ministers in quick succession: Harold Holt, John McEwen and John Gorton.

Costello’s statement, unlike the other two just quoted, was only slightly inaccurate with respect to Australia’s peak aid/GNI ratio—out by no more than a couple of tenths of a percentage point and one prime minister.[1] The other two statements were quite inaccurate. All these inaccuracies, small and large, stem from problems with OECD data on Australia’s ODA/GNI ratios from the 1960s right into the 1990s.

As the result of a recent fact-checking exercise undertaken for The Conversation, which led me to the above conclusion, I’ve prepared a policy brief presenting an accurate series of data on Australia’s aid generosity over time, extending for the first time as far back as 1961-62, based on appropriate Australian government ODA and GNI data.

The Development Policy Centre’s interactive Aid Tracker already brings together the most readily available Australian government statistics on Australian aid flows over time, extending back as far as 1971-72, but until now it has been hard to find any information on flows during the 1960s.[2]

Fortunately, it happens that the Australian Bureau of Statistics (ABS) used to report on aid expenditures in its series (discontinued after 2012) of annual Year Books, which can be found—though not particularly easily—on the ABS web site. By burrowing around in these, you can piece together information on expenditures from 1961-62 to 1970-71 with the exception of one year, 1962-63—and the rough level of aid in that year is easy to infer ($75 million).

On the basis of the ABS data and other information already reflected in the Aid Tracker, together with the most recent ABS time-series data on Australia’s GNI, it is evident that the OECD’s aid/GNI ratios for Australia are quite inflated over the three decades or so from the early 1960s to the mid-1990s (Figure 1). On average, the ratios published by the OECD are inflated by about 20% up to 1995. In some individual years, including 1975, they are inflated by over 40%. 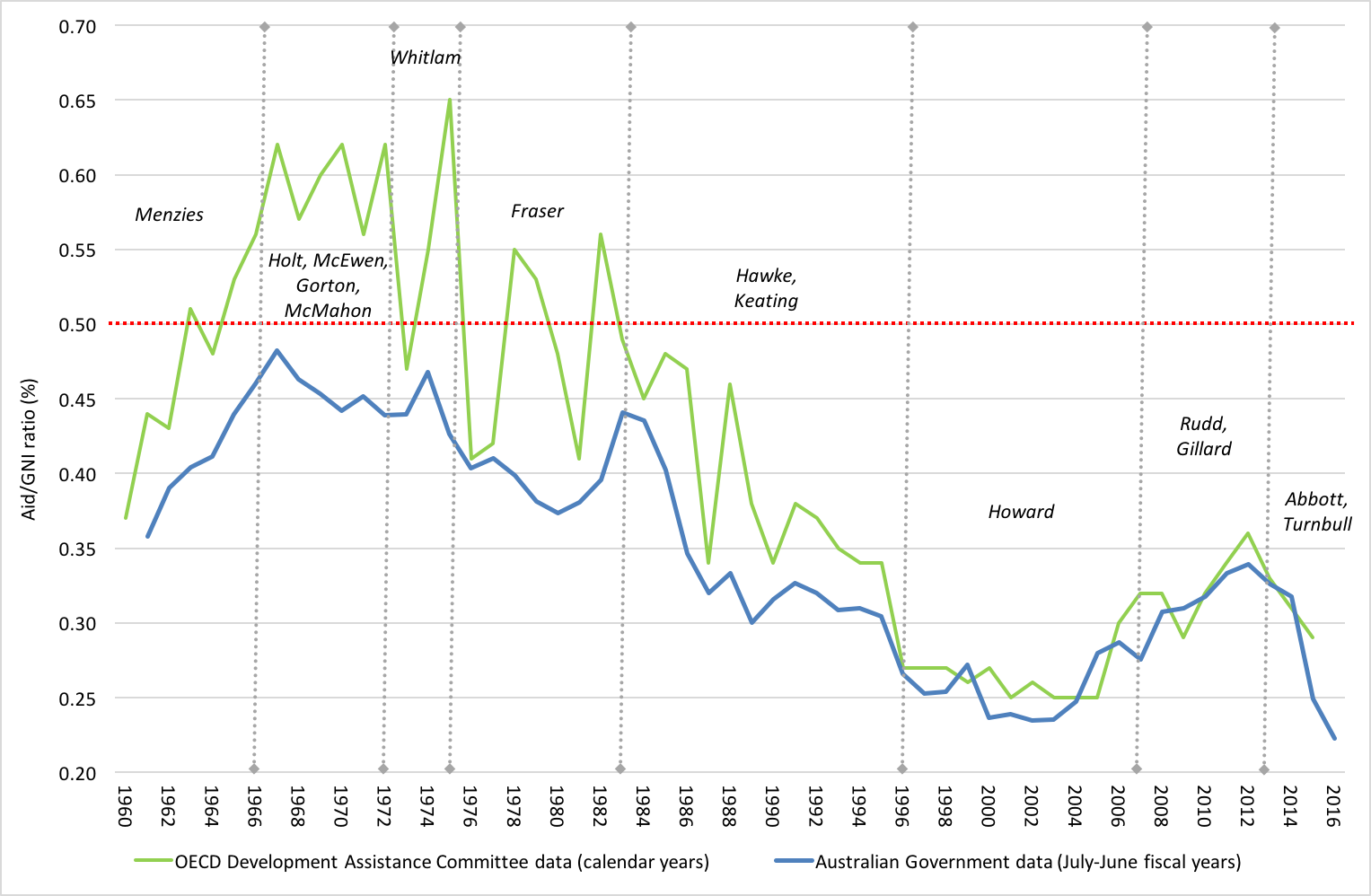 Click image to enlarge. See this spreadsheet for a collation of the data on which the above chart is based, with links to sources.

The best of intentions

While OECD aid data are organised on a calendar year basis and Australian data on a July-June financial year basis, that is not a significant factor in the marked variations between the green and blue graphs above. The variations are mostly due to the use of very different GNI denominators up to the mid-1990s. It is likely that the GNI figures originally reported to the OECD by the Australian government, at least for the early decades of Australian aid, were subsequently revised upward by the ABS but not by the OECD.

Australia has consistently been among the first three or four of the major aid donors, with a figure for direct government aid averaging 0.56 per cent of GNP over the last four financial years.

This statement, even allowing for the minor difference between GNP and GNI, is consistent with the ratios reported by the OECD for the same period and implies that contemporary estimates of national income were lower than today’s.

The moral of the story isn’t that the decline in Australian aid generosity is fake news. Aid generosity under Menzies was twice as high as it is now, even though per capita income was less than half of its present level. Australia’s aid/GNI ratio stood at 0.44% in the final year of the Menzies era and increased to 0.48% soon after. In addition, contemporary documents indicate that governments in the late 1960s and early 1970s believed they were spending some 0.56% of national income as aid. OECD statistics still reflect this belief. They’re unreliable, up to the mid-1990s anyway, but they preserve the best of intentions.

Robin Davies is the Associate Director of the Development Policy Centre. The above post and the related policy brief draw on a fact-checking article and related methodology note first published on The Conversation.

[1] If OECD statistics were correct, Costello’s statement would actually be the least accurate of the three quoted, since those statistics assert a maximum ratio of 0.65% under Whitlam.