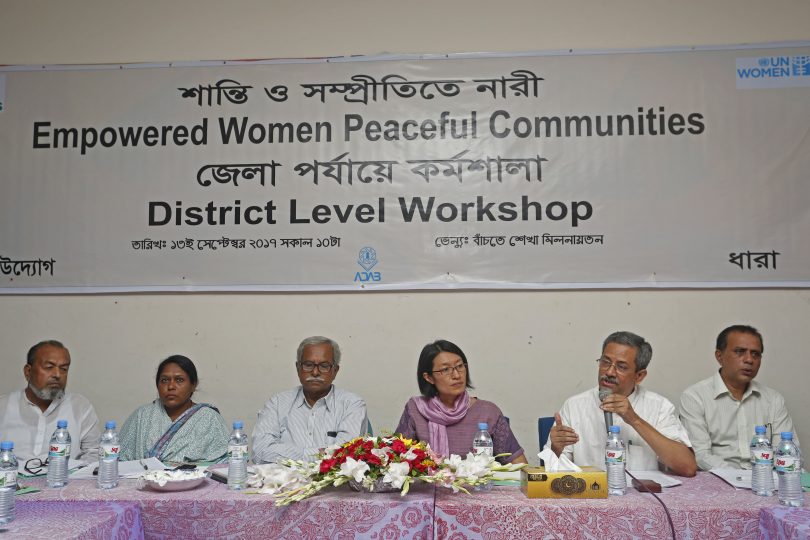 (Credit: UN Women Asia and the Pacific/Flickr/CC by 2.0)

As a feminist, it is immensely inspiring to see the current resurgence in gender and social justice movements, from speaking out about individual experiences of gender discrimination and violence, to direct actions against structural inequality. It is even more affirming to know that women are not alone in this fight. Around the world, men are also becoming more and more dissatisfied with the heteronormative, patriarchal world order. In the realm of activism to end violence against women (VAW), this has taken the form of White Ribbon, HeforShe, and the actions of individual men to support movements such as #MeToo.

And yet… all of this was the rhetoric ten years ago. In the late 2000s, I was a junior officer at UN Women. At the time, there was a proposal to form a global network of third sector organisations that were dedicated to involving men and boys to stop violence against women. Slogans and phrases such as “working with men and boys” or “men as partners, not perpetrators” flowed freely in meetings and printed glossy reports. This experience led me to pursue PhD research on men’s involvement in ending violence against women in Afghanistan, Pakistan and Timor Leste. The aim of the research was to understand how theories about involving men are translated into aid programs, and how they have affected local communities and gender relations. The fruition of the research saw the recent publication of my book ‘Involving men in ending violence against women: development, gender and VAW in times of conflict’.

Hindsight is a privilege for the frustrated, and to be honest, we have not done very well in meaningfully involving men in the violence against women activism. Drawing from my book, as well as work experiences in both academic and foreign aid contexts, here are three explanations as to why we haven’t done well, and how we might do better.

An oft-used rationale for engaging with men is that violence against women is a human rights issue, and it is everyone’s business. Also known as the ethical argument, it appeals to men’s sense of justice, right and wrong, and the impetus to take a stand. It is a sound argument, and one with which I happen to agree. But it needs to be used carefully within contexts of unequal gender relations and where women’s leadership and participation are low, because the goodwill can easily become lost within the echo chamber of men’s voices. In South Asia, I have sat through meetings where, as the only woman in the room, I listened to Western and South Asian men lamenting over women’s “lack of progress”. The same men earnestly pondered over solutions. In those meetings, the thought of consulting with women’s rights leaders, organisations, feminist academics, activists and communities never occurred. My efforts to advocate with the men that they need to listen and seek advice from the local women only brought forth platitudes that we must improve girls’ education and educate women about family planning.

In other words, men have a responsibility to act, but this does not translate into acting or deciding on behalf of women.

It is easy to generalise the issue of violence against women, yet the intersectionality of race, class, gender, sexual orientation, ethnicity, religion, caste, age and disability means there is no useful cookie-cutter approach. We must be careful in how we research and understand potential solutions.

Collectively, women as a political group face gender discrimination and gender-based violence. Yet, individual women have different identities and levels (or the lack) of privilege/marginalisation. This means each woman’s experiences with violence and discrimination will be different.

There are many strategic forms of activism to increase men’s participation in ending violence against women. For example, the White Ribbon campaign calls for men to take a public stand, by having senior male leaders in organisations to serve as “champions” against domestic violence or sexual harassment at the workplace. These are positive initiatives and are meant to provide positive role models for men. However, as these positions are created within the broader realm of gender and social inequality, it is vital that we must not inadvertently send out the message that only men can take a leadership role to end violence against women.

Time and again, I have come across men with perfectly good intentions who want to do the right thing for their community. In Pakistan, for example, a local Press Club President in the Sindh Province used his network and position to write opinion pieces about the harms of domestic violence. In another case, an NGO manager helped a young woman to get out from an unwanted arranged marriage. In yet another case, a group of male university students would go to nearby villages and perform dance and dramas about gender equality and women’s rights. The men’s intentions are good, and it was clear that they felt compelled to act due to the intolerance of gender inequality and violence. However, these men are making activisms for women, instead of working with them.

This is the challenge for donors, civil society organisations and policymakers alike: how do we involve men in a way that is meaningful, proactive, yet conscious of unequal power relations? How do we balance harnessing the roles and privileges that enable men to act, yet do so through the humility and recognition that it is this very privilege that helps them to speak out, which is also contributing to the inequalities that we face today? These are difficult questions, but they must be asked if we are serious about involving men to stop violence against women.

Joyce’s book ‘Involving men in ending violence against women: development, gender and VAW in times of conflict’ was launched at the Crawford School of Public Policy at 5.30-6.30pm on Monday 7 May 2018.

Joyce Wu is a Research Fellow at the Crawford School of Public Policy. Currently, she is researching integrating gender into an Australian Government funded program - the Sustainable Development Investment Portfolio - with the Commonwealth Scientific and Industrial Research Organisation (CSIRO).