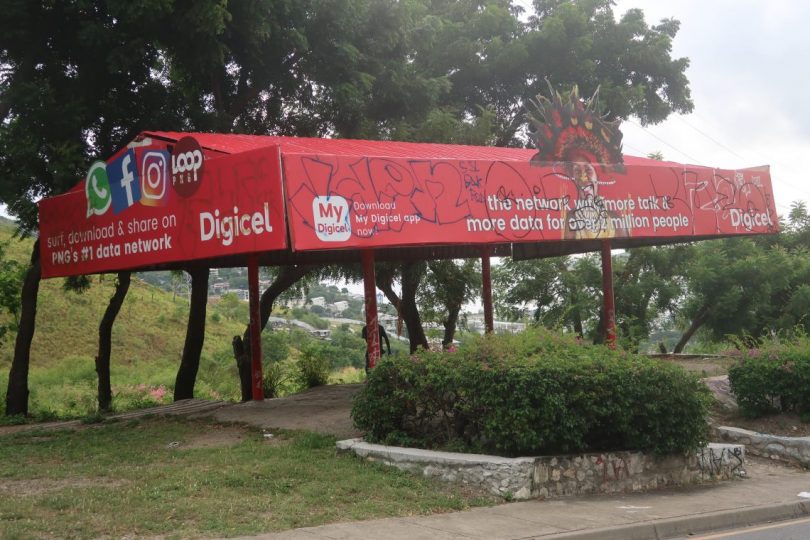 Mi gat Y (Tok Pisin for I have Y), Mi gat dinau long Digicel (I have a Digicel loan), and Digicel kaikai olgeta mani blo mi (Digicel ate all my money) are just some of the latest expressions in PNG to refer to a loan product offered by Digicel. ‘Y’ stands for Yes in Digicel PNG’s automated messages asking its customers to ‘Reply Y…’ (Figure 1) if they wish to opt into committing to an array of loan products to purchase phone credits. 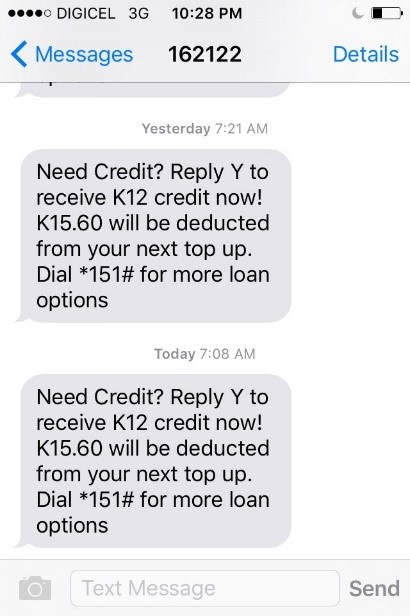 These now common sayings show how Digicel’s loan scheme has been brought into the sphere of people’s everyday money worries about basic necessities, financial hardship, and their reliance on street money lenders, with usurious interest rates of anywhere between forty and fifty percent for a loan of just a week or two. Indebtedness is common. Popular expressions include mi gat dinau (I have an outstanding loan); mi laik buk (I want to borrow some money); and mi go long maket mani (I am going to the money market). Many urban dwellers are trapped by low incomes, high prices, and loans. One told Michelle a few years ago:

I used to work as a security guard for K300 per fortnight. That is not enough money for the family so when we are short we buk [borrow] K100 and have to repay with another K50 on top of that. In a fortnight if we repay K150 we are left with K150 and it is not enough for us. What money will we buy food and what money will we give our two girls for bus fare to go to school?” – Raymond, ATS settlement, 2013 (cited in Rooney, 2017: p254).

Raymond’s case is not isolated; it was the common pattern among people Michelle interviewed. Today, in 2020, the situation remains the same for many people, including middle class people in relatively highly paid jobs. Some people might argue that Digicel’s loan scheme offers its customers an alternative to street lenders that is accessible, private, and convenient. But Digicel’s loan scheme also raises important public policy questions.

In addition to its top up and bundle products, Digicel offers an array of “Credit and Bundle on Loan” options. Once one’s credit drops to a certain amount the customer receives an automated text message asking if they need credit and to ‘Reply Y’ if they choose to opt in or to browse other loan options by dialling *151# (see Table 1 and Figure 1). The text is sent at periodic intervals as the balance approaches zero until the customer either buys more credit or opts in with a Y and selects a loan. As you can see from the table below which summarises the options offered through the automated texts, and according to Digicel’s website, for most or all packages any credit purchased only lasts for a day. 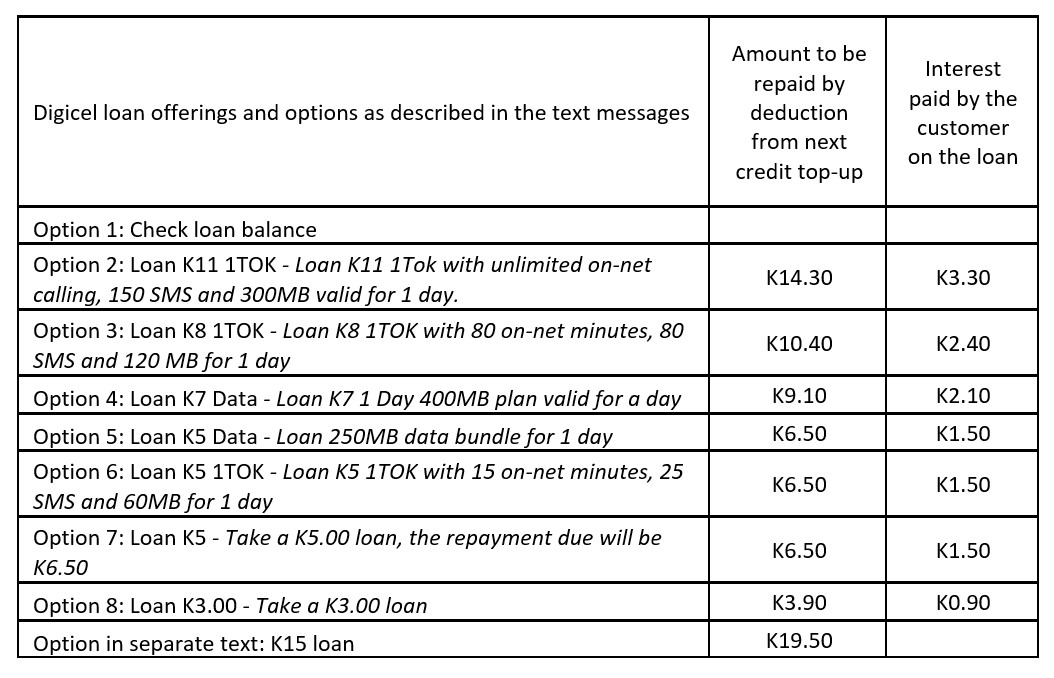 Digicel occupies a giant share of the mobile market in PNG. Neither of its two main competitors, B-Mobile and Telikom, offer credits on loan and they sell different mobile products which are not fully or immediately substitutable. The cost of purchasing a new Digicel sim or switching to B-Mobile and Telikom sim cards ranges between K10 and K15 depending on the retail outlet. Given its dominance, this scheme not only enables Digicel to control a significant part of the mobile market but also to control a significant part of the microlending market.

It is not clear what regulatory framework the Digicel loan scheme is operating under. The PNG Independent Consumer and Competition Commission’s (ICCC) website indicates that one of ICCC’s objectives is to ‘enhance the welfare of the people of Papua New Guinea through the promotion of competition, fair trading and the protection of consumer’s interests’. How does Digicel’s scheme stack up? The Bank of PNG, as the regulator of financial institutions in PNG, includes Digicel as a mobile phone operator and a money remitter for incoming remittances. It is not listed as a licenced financial institution.

For all the examples we found this month (in the table above) and in February, the interest rate on the Digicel loan schemes is 30%.  How much Digicel makes on its loans depends on two things: (a) how often users top up (as per the website, most or all of your next top up goes to paying your loan back); (b) how long a user sticks with the one sim card (if you change sim cards, you don’t have to pay the loan back).

Digicel manages its risk by only allowing selected customers to participate in the scheme. According to its website, to be eligible a user must have topped up within the last seven days, and must have had a sim for at least 30 days. Customers are segmented into three different categories based on how much credit they have bought in the last month. More generous offers are presumably available to those who have been on the network for longer, and spent more. In other words, Digicel is able to manage its credit risk by being selective.

The combination of the 30% interest rate, and the fact that Digicel can manage its risks by being selective in who it offers credit to lead us to suspect that the scheme is highly profitable for the company.

One guess would be that users top up every week (since this is a requirement for scheme eligibility), and that one in every ten users of their services change their sim card over this period and so don’t pay back their loan. Under these assumptions, Digicel would expect back K1.17 at the end of a week for every K1 lent out. If Digicel receives a 17% return every week, this is equivalent to a stunning return of 351,200% per year. (K1 would grow to K3,513 if the initial Kina plus accumulated interest is lent out in each subsequent week. You can see and change our calculations here.)

Essentially, what Digicel is offering is use of a phone to people who need it now (within the next 24 hours) but are unable to pay for it now. It is a useful service, but a very expensive one.

Digicel might defend itself by saying that its rates are competitive with or lower than those of street lenders. The company is clearly providing a service that is in demand. But street lenders don’t promote themselves as good corporate citizens, don’t set up philanthropic foundations, and aren’t subject to ICCC regulation.

More data is needed before a final judgement can be made. ICCC and BPNG should investigate. And Digicel, consistent with its publicised corporate values, should reveal the parameters underlying the scheme.

As PNG grapples with the social and economic fallout of COVID-19, and as Digicel faces the prospect of restructuring in the Pacific, transparency and good corporate behaviour are more important than ever.

Data collection on Digicel loan products, obtained through Digicel’s automated text messages, was done on May 20 2020. Screen shots available. With thanks to Michelle’s friends and family for data gathering.