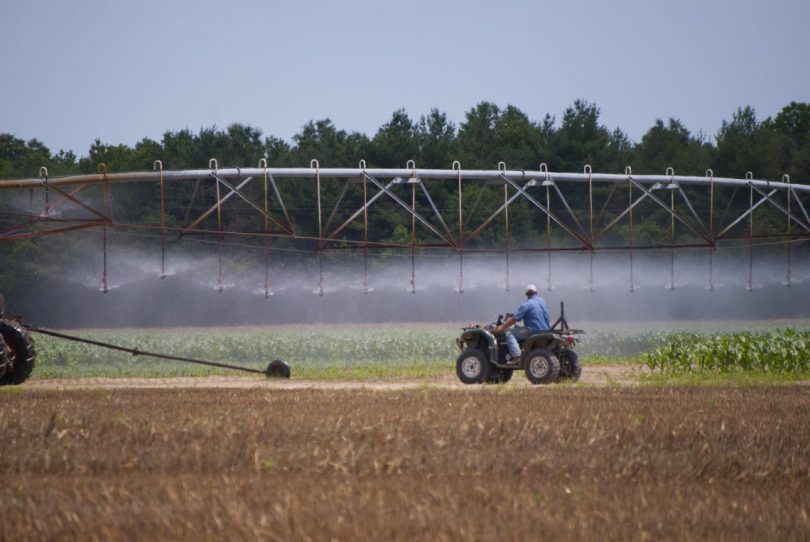 Employers can now recruit from overseas for some low skilled occupations, such as irrigationists (Credit: Michele Walfred/Flickr CC BY 2.0)

For months during the second half of 2018, the Nationals and the agricultural industry agitated for the introduction of a stand-alone agricultural visa. While a formal proposal was never publicly put on the table, the Morrison government rejected the idea due to a combination of foreign policy and immigration policy concerns. In addition, research subsequently published showed that, when compared to other industries, few horticultural farms actually report having difficulty filling vacancies. Despite all this, a package of policy shifts has emerged since late 2018 resulting in a de facto agricultural visa, made up of different component parts.

In late 2018, an additional third year was made available to backpackers if they undertook six months work in designated regional areas in agricultural occupations. As Stephen Howes has written, this change by itself represents a serious threat to the success of the Seasonal Worker Programme, development outcomes across the Pacific, and worker welfare.

In addition, full-time and year-round jobs are now more likely to be addressed by programs outside either the Seasonal Worker Programme or Pacific Labour Scheme. A suite of Designated Area Migration Agreements was announced in recent months. These included occupations such as Agricultural and Horticultural Mobile Plant Operator and Mixed Crop and Livestock Farm Worker. The latter is the equivalent of a general farm hand according to the Australian Bureau of Statistics.

Then, two days before Christmas last year, the Morrison government announced a new Horticultural Industry Labour Agreement, which utilises the Temporary Skill Shortage visa. This type of agreement allows employers to directly sponsor workers with a number of concessions to standard visa rules and regulations. For example, normally an employer cannot sponsor migrants to work as Irrigationists and Irrigationist Assistants, as these are considered insufficiently skilled occupations. However, this agreement permits those occupations (among others). The agreement also provides a special exemption allowing employers to pay workers a minimum of $48,510, 10 per cent below the typical salary threshold. There is also an English language proficiency concession and, uniquely for entry-level occupations in Australia, a pathway to permanent residency for workers. This is in stark contrast to both the Seasonal Worker Programme and the Pacific Labour Scheme, neither of which has access to a permanent residency pathway.

Perhaps the boldest policy tweak was the creation of new occupational codes by the Department of Home Affairs exclusively for the horticultural industry. Classifying occupations is meant to be a task undertaken by the Australian Bureau of Statistics. Yet the Horticultural Industry Labour Agreement has created a new occupation, ‘Horticultural Section Manager’, with an entry-level classification (skill level 5). When you do a search of equivalent ABS entry-level occupations, there is not a single example with managerial responsibilities as part of the job description. It is easy to imagine how employment under this new code could displace veterans of the Seasonal Worker Programme who have progressed to become team leaders.

For the Pacific, this new approach represents a challenge. While some will argue that the financial costs of these agreements will lessen the effect on Pacific labour mobility programs, employers will be attracted to this option. Recruitment is open to any country, with employers attracted to tapping into well-developed recruitment supply chains in countries such as the Philippines, Indonesia, and Vietnam. The provision of year-round work on a three or four year visa will also prove attractive, and a direct alternative to the Pacific Labour Scheme. Finally, the Department of Home Affairs is the approving agency instead of the Department of Education, Skills and Employment. While this may seem unimportant, the latter have traditionally had a more rigorous approach to approving employer sponsorship for hiring overseas migrants.

The one bright spot is the potential for this channel to act as a pathway for Pacific citizens to long-term residency outcomes in Australia. It may be the case that people can seek to transition from the Seasonal Worker Programme into this horticultural agreement, allowing family reunion in the process. This would address some of the increasing concerns about the ‘permanently temporary’ nature of existing Pacific labour mobility programs.

Clearly, the Australian Government is seeking to placate the agricultural and horticultural industries without resorting to the introduction of a new visa. This is the third immigration policy change in favour of horticultural employers since the Australian Government knocked back a formal agricultural visa. Judging by its public release two days before Christmas, this is policy administration by stealth, an attempt to circumvent debate over the direction and scope of Australian immigration policy. For example, this is the first instance I can recall of such extensive occupational concessions, combined with salary and English concessions, for employers to use the Temporary Skill Shortage visa. While there are some positives to mitigate worker exploitation, such as the link to permanent residency, it is difficult to see how this isn’t simply a reaction to industry and political lobbying instead of considered policy development in the public interest.