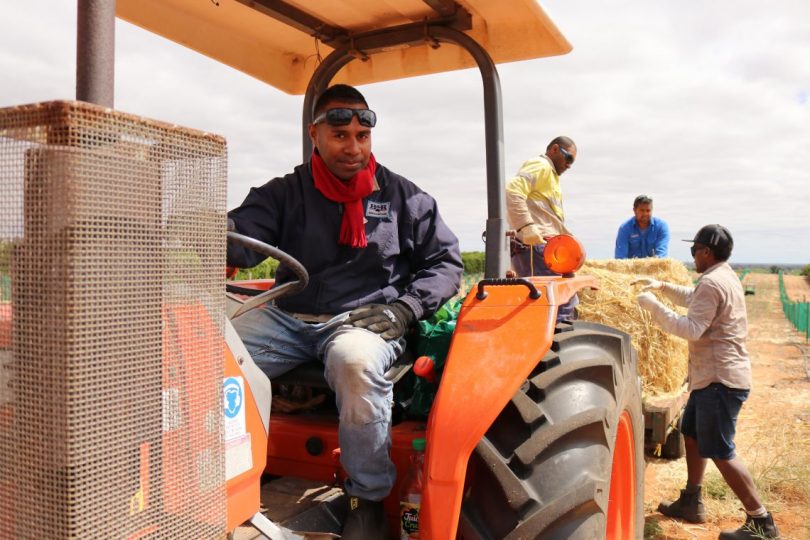 Since 2008 when the Rudd Government first introduced the Seasonal Worker Programme (SWP), there has been a clear imbalance between the number of Pacific citizens wanting to work in Australia (many) and the number of Australian employers hiring them (few). Despite a promising decade of iterative improvements to Pacific labour mobility leading to more than 12,000 people in the SWP in 2018-19, this imbalance remains the most important fact holding back more Pacific citizens working in Australia.

A new report from the Australian Bureau of Agricultural and Resource Economics and Sciences (ABARES) establishes why employers do not hire more Pacific seasonal workers. Demand for farm workers by Niki Dufty, Peter Martin and Shiji Zhao, finds only four per cent of horticultural farms use the SWP.

The authors conducted a nationwide vegetable survey (excluding the Northern Territory) and a fruit and nut farm survey in the Southern Murray Darling Basin. They sampled over 2,500 farms, across industries making up about three quarters of total agricultural employment in Australia.

The results show that only 18 per cent of vegetable farms and 14 per cent of fruit and nut farms who recently recruited had difficulty filling vacant positions. This compares to 44 per cent for businesses across Australia. This is the best evidence to date that there is no horticultural labour shortage in Australia. (Richard Curtain and Stephen Howes compare the contrasting results obtained by another survey here, and explain why the ABARES results are more credible). The surveys conducted by ABARES did not find a large number of unfilled vacancies. Farmers reported recruiting for over 20,000 positions, of which only around 700 remained unfilled.

The fact that few horticultural farms have difficulty filling vacancies flies in the face of popular opinion. If you only followed media stories or political announcements, it would seem like regional Australia is beset by a massive labour shortage and that farms are struggling to attract any workers. However, at least in the horticultural industry, this is not the case.

The ABARES report highlights why there is no labour shortage. Horticultural farms are more labour-intensive than other types of farms, and their labour needs are much more likely to be met by workers from overseas, with over a third of peak seasonal jobs filled by overseas workers, mainly backpackers and undocumented overseas workers. As has been well documented, worker exploitation and wage theft are more likely when backpackers are involved, as employers know these people are working to spend more time in Australia as their primary goal instead of seeking to earn as much money as possible. Undocumented workers are even more vulnerable.

There is one sign of hope. Despite the lack of a labour shortage, the SWP is growing rapidly: by 50 per cent or 4,000 visas last year. It would seem that Australian farmers are increasingly attracted to the SWP, or perhaps increasingly wary of unregulated labour. The licensing by some states of labour-hire companies, the pressure from supermarkets on farmers to avoid labour scandals, and greater enforcement efforts by various government agencies are all leading farmers to turn towards the SWP as an expensive, but safe and reliable option. Whether the SWP will continue to grow remains to be seen, however, especially given recent policy reforms.

The continued myth of a labour shortage prompted the Morrison Government to introduce more expansive access for backpackers under the Working Holiday Maker visa program. From 1 January 2020, people who have worked for six months on their second backpacker visa will be able to gain a third year. If one in four people on their second year seek a third year, this will drive an additional 10,000 people into regional labour markets. In addition, backpackers can now work for up to 12 months for the same employer in certain areas, double the previous limit of six months. A strong majority of the additional labour will end up on horticultural farms, potentially displacing other workers, including Pacific citizens in the SWP.

Recent analysis showed how the number of backpackers working on farms has already started to increase sharply. This trend may be further exacerbated given news backpackers from eight countries are exempt from the backpacker tax rate and can access the tax-free threshold if they meet certain criteria. It is difficult to estimate the effect of this ruling on the number of future backpackers and whether this will induce more workers into the horticultural labour market.

The new backpacker regulations that are now in place will further entrench exploitation of young migrants in the industry, exacerbate downward pressure on wages and conditions for existing workers in the industry, and undermine the SWP. There was no opposition to these changes in the Australian Parliament. The main opposition party, Labor, has increasingly raised issues of exploitation due to the precarious nature of employment for people on temporary visas, particularly backpackers. But when the opportunity arose to attempt to disallow the new regulations, nothing happened.

I was also unable to find any comment over the past year from development NGOs on the potential negative affect this would have on poverty reduction in the Pacific. Gibson and McKenzie find the equivalent program in New Zealand, the Recognised Seasonal Employer, ‘one of the most effective development interventions for which rigorous evaluations are available’. Despite the proven effectiveness of these migration pathways to reduce poverty, the continued silence from the development community allows governments the opportunity to rollback progress on the premise of a myth. In an era where structural aid cuts have undermined Australia’s capacity to deliver poverty reduction, there should be a more active approach to support a broader development agenda which includes migration.