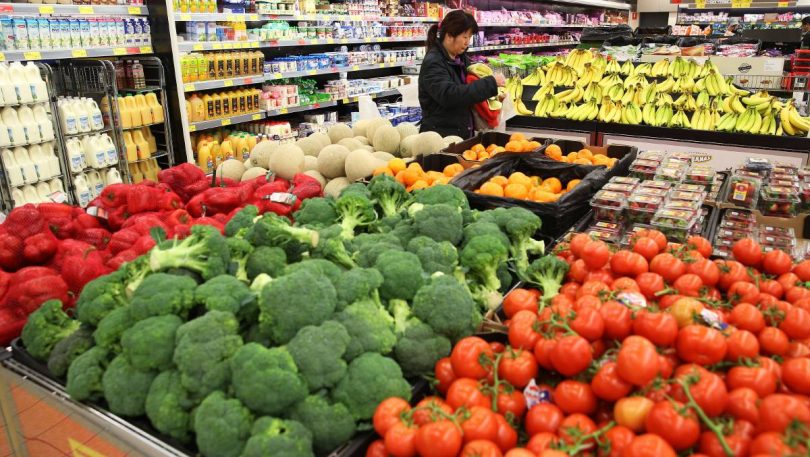 The most recent data release on Working Holiday Makers showed that the number of backpackers travelling to Australia had fallen for the sixth year in a row. This didn’t stop Immigration Minister David Coleman and Trade Minister Simon Birmingham putting a positive spin on the numbers by focusing on the rise in second-year backpacker visas granted. Both the numbers themselves — and the perspective provided by government — show that the backpacker visa is increasingly an agricultural one.

The key trends are shown in the figure below. The number of first-year visas has fallen every year since 2012-13, by a total of 24%. At first, this resulted in the number of second-year visas (obtainable in return for three months of regional, typically farm work) falling, but that number has grown by 25% in the last two years, and is now close to its 2013-14 peak. Hence the government rejoicing. 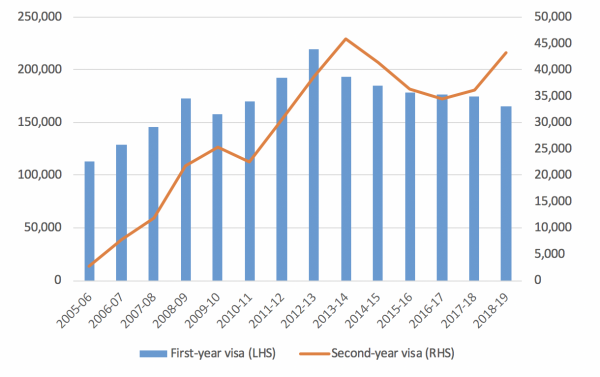 What is driving these contradictory trends? The simple answer is that backpackers are increasingly coming to Australia to work on farms. As the figure below shows, the share of second-year to first-year backpacker visas has been on an upwards trajectory ever since the second-year option was introduced (in 2005) and is now at 25%. 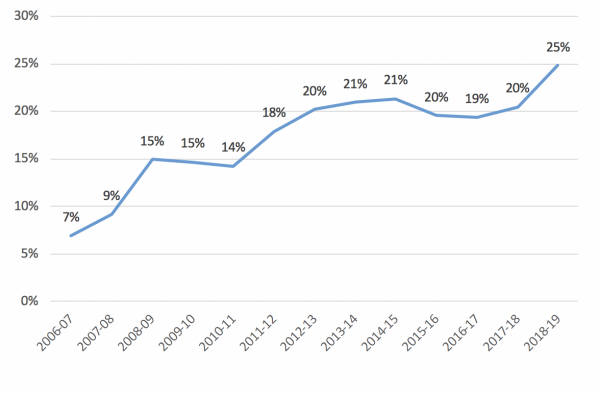 For a more detailed understanding, we need to distinguish between the two types of backpacker visas. 417 (Working Holiday) visas are available for developed countries and 462 (Work and Holiday) visas are available mainly for developing countries. The second visa option was introduced for 417 visa-holders in 2005, but only became available to 462 visa holders in November 2016 and then only in return for three months of work in northern Australia. It was in November 2018 that 462 second visa requirements were extended to work anywhere in regional Australia, and so brought into line with the 417 visa.

417 visas numbers are uncapped. With the exception of the United States (the only developed country to be put in the 462 category), 462 visas have specific country caps (from 100 to 5,000) and stricter eligibility criteria for applicants, such as completion of at least two years of undergraduate study and passing a functional English assessment.

Using this distinction between 417 and 462 visas, we can see two trends that explain the rapid rise in second-year visas despite an ongoing decline in first-year visas. First, both visa categories are seeing an increase in the second-to-first-year ratio. In particular, the 462 second-to-first-year ratio is growing very rapidly, faster than the 417 one: the former was much lower than the latter, but is now slightly higher. 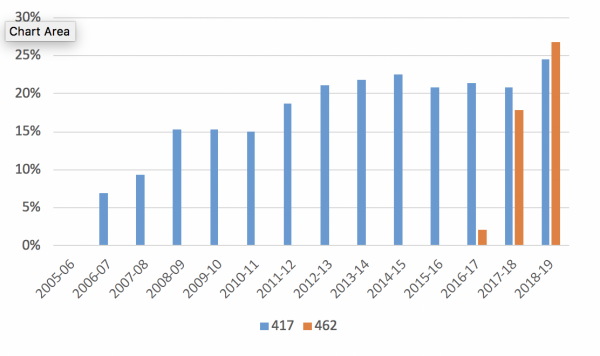 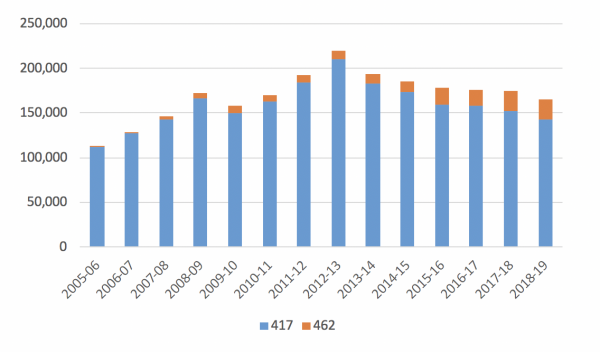 While both 417 and 462 second-year visas are increasing, the figure below shows that most action is being seen in the second category: 62% of the increase in second-year visas in the last two years is within the 462 category. And most of that is due the increasing propensity of 462 visa holders to work on a farm in their first year. In other words, the decision of the government to extend the 417 second-year visa conditions to the 462 visa is really paying off. 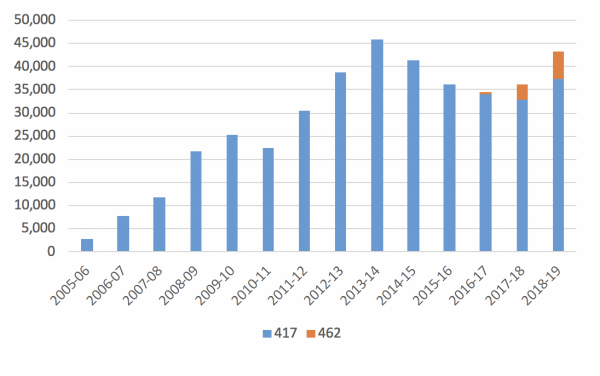 The final figure shows the share or second-to-first year visa ratio by country for the ten countries with the highest second-to-first-year ratio (out of all countries who have at least 100 second-year visa holders). These ratios are remarkable: two-thirds in Vietnam, 60% in Indonesia, 50% in Estonia and Taiwan, and 40% in Ireland and China. (The numbers above each column show the absolute number of backpacker visas for each country.) 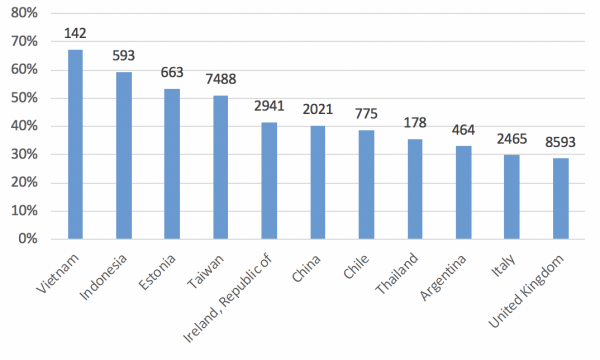 Six of these top-ten countries are eligible for 462 visas (Vietnam, Indonesia, China, Chile, Thailand and Argentina). Most 462 applicants require sending government support (though not China and Chile from this group). More research would be needed to confirm this, but, when the ratio of second-to-first year visas is at 60% or above (Vietnam and Indonesia), it certainly looks like a deliberate plan by the sending government to channel its emigrants onto Australia’s farms.

Among developed countries, no sending government permission is needed to get a 417 visa. But, while backpacking to Australia isn’t becoming more popular, the second-year visa option is getting better known and more used. It is remarkable that half the Taiwanese backpackers now coming to Australia end up working on a farm for at least three months. Presumably, most of them arrive with that intention.

There are two possible motivations for backpackers seeking farm work and the second-year visa. Almost one in five backpackers end up migrating to Australia, and getting a second-year visa is the first step on the road to permanent residency. That would require working three months on a farm to get the second-year visa, but then working off farm in the second year to stake a claim for a longer-term visa. The other option is just to work for two years on a farm. That doesn’t provide the option of permanent residency, but two years of full-time work at Australian award rates could set you up for the future if you are from Vietnam or Indonesia or China, even if you are a graduate.

If successful migration policy is about increasing the absolute number of workers – regardless of best fit – then these results are a measure of success. However, does it make sense to expand a program that is broken? We know that backpackers are highly vulnerable to exploitation. A recent Fair Work Ombudsman inquiry found that the second-year visa incentive has created an environment where “exploitative workforce cultures/behaviour are occurring in isolated and remote workplaces.”

Many other questions should also be asked. Is it good policy to target young workers from high-income, European countries and the USA, and tertiary-educated workers from upper-middle income countries in East Asia and South America to prop up seasonal labour supply for the horticulture sector? Should the backpacker program be exempt from labour market testing requirements? Can it make sense to have two types of schemes that are so different: the highly regulated Pacific-focused Seasonal Worker Programme and Pacific Labour Scheme, and the unregulated Asian-Euro-focused 417 and 462 backpacker visas?

More growth in backpacker numbers is likely, perhaps much more growth, as this migration/multi-year work channel becomes better known and used. Last year, the government introduced a third-year backpacker visa (for both 417 and 462 visa holders) that is available following six months of agricultural or other regional work in the second year. 462 numbers are capped, but the aggregate caps have been increased by 46% this year, following earlier significant increases.

The questions around the backpacker scheme will only grow as the numbers do. It is extraordinary that Ministers Coleman and Birmingham should welcome the growth in a scheme condemned by the Fair Work Ombudsman as exploitative. This horse has largely bolted, but at a minimum, the government should avoid further increases in the 462 caps to slow the further morphing of the backpacker visa into an unregulated agricultural visa.