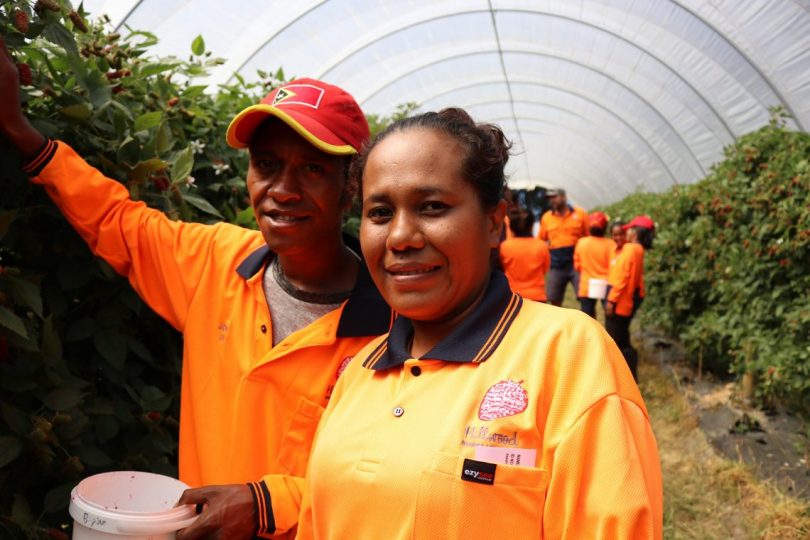 The Seasonal Worker Programme (SWP), which allows workers from the Pacific and Timor-Leste to work on Australian farms for up to nine months, grew by 44% in 2018-19 or by some 3,000 workers – the largest absolute increase ever and one of the highest percentage growth rates.

While slow to find its feet compared to the RSE, the SWP surpassed Pacific RSE participation in 2018-19. And expect the gap to widen. New Zealand continues to cap RSE numbers. The cap is reviewed regularly (annually since 2014) with the latest revision in November 2018 to 12,850 workers, a 16% increase on the previous year’s cap. Caps on worker numbers for the SWP were removed some years ago, allowing for much more rapid growth of the SWP in response to market demands. One prediction is for SWP demand in Australia to reach 37,500 seasonal work opportunities by 2030. Current growth rates suggest that target will be achieved early.

Figure 1: SWP and RSE (Pacific only) participation commencement to 2018-19 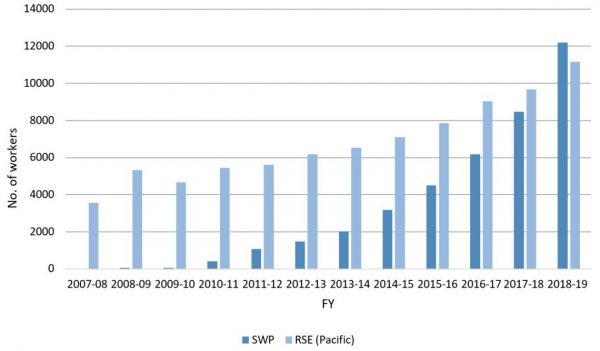 But it’s not a competition. Significant job shortages across the Pacific mean there’s a large, willing seasonal labour supply. In fact, there’s fierce competition for SWP and RSE places, and some sending countries have much higher rates of participation than others. Figure 2 details country shares in both the SWP and RSE for the 2018-19 period. 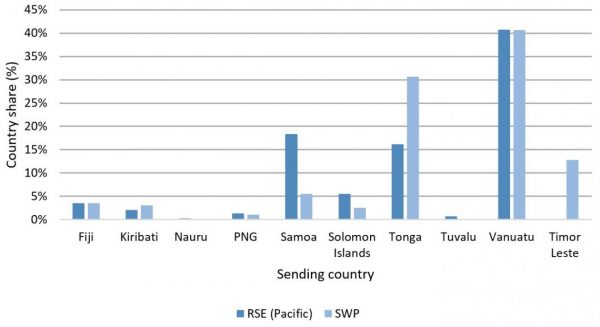 Each scheme is in fact dominated by three countries. On the SWP, Vanuatu, Tonga and Timor-Leste have maintained approximately 85% of the market, or higher, since the scheme started. As Figure 3 shows, 2018-19 was no different with workers from Tonga, Vanuatu and Timor-Leste representing 84.2% of all SWP workers.

Figure 3: Timor-Leste, Tonga and Vanuatu shares in the SWP 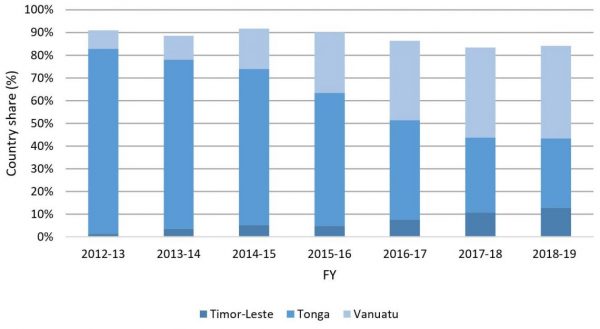 A similar trend can be observed on the RSE (Figure 4). Vanuatu, Tonga and Samoa have maintained the lion’s share of over the duration of the scheme, and represented a combined share of 75% of workers in 2018-19.

Figure 4: Samoa, Tonga and Vanuatu shares in the RSE (whole of scheme) 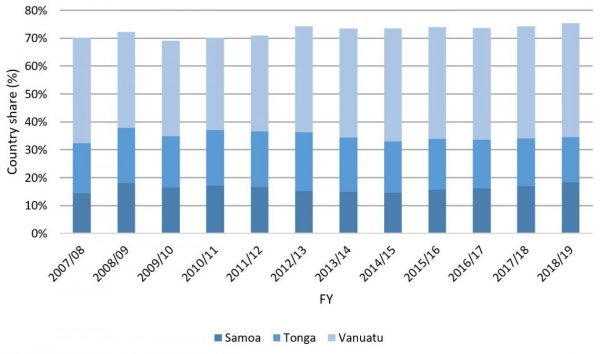 Whether other countries will be able to challenge the big three in each case remains to be seen. That’s certainly a question for PNG. Despite its large population and significant domestic labour pressures, PNG sent just 1.05% of SWP workers in 2018-19. These latest figures are consistent with previous year engagement. PNG has been notably absent in the schemes (and in the new Australian Pacific Labour Scheme). There are a range of possible reasons for this, but reiterated and new commitments from both sides of the Coral Sea might see this change as PNG works to catch the ‘missed opportunities’ labour mobility provides.

Seasonal labour is traditionally biased to men; however 2018-19 shows a slight improvement in the gender composition on the SWP (Figure 5). Female participation in the SWP has hovered between 12.4% and 14.6% since the scheme started in 2012. In 2018-19 female participation improved slightly, up to 17.9%. 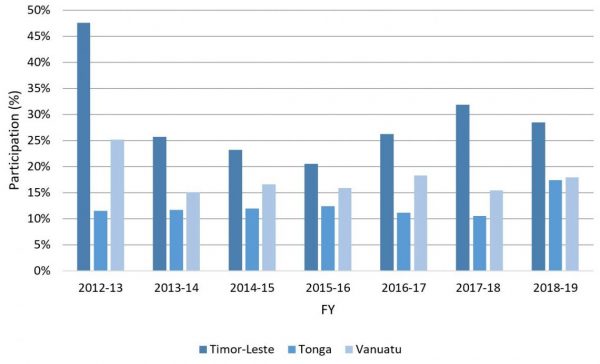