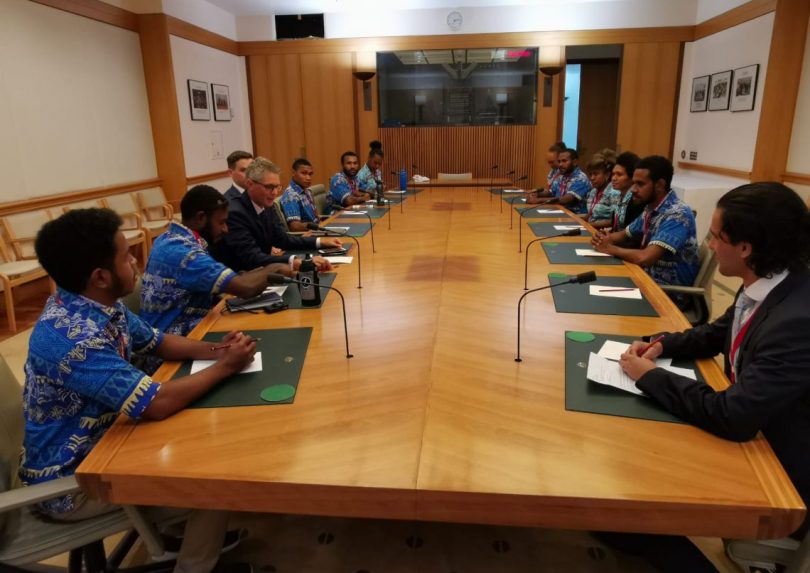 I am the first born in my family of seven children. I come from a poor background in a remote part of the mountainous Eastern Highlands of Papua New Guinea. My parents are subsistence farmers.

I started my education when I was four years old at my village primary school in 2000, in Sonofi about 74 kilometres from the town of Kainantu. My parents often couldn’t afford the school fees. In those years, I had to withdraw, and wait for the next year. This happened in both grades three and four.

Because of these delays, in 2010 I was still at Sonofi Primary School when it was shut down due to administrative issues – the headmaster was accused of misusing school funds. I went to my mother’s village and moved in with my aunt who was married to a primary school teacher. He was principal of the Kesevaka Primary School, which I attended, again in a very remote part of the Eastern Highlands, in Henganofi district.

In 2011, Sonofi Primary School was opened again, and I moved back to live with my parents. However, there was a great shortage of teachers. I was taught by a male teacher in a double class of grade six and seven. This was common in the school. I wasn’t learning anything, so I left the school during term one.

In term two, April 2011, I tried a third school, at another village where another aunt was living. I enrolled at the Onerungka Primary School in Kainantu district during the second term of that year. But this was also a problem school. It had been burnt down in 2002 due to political conflict. There were only three teachers at the school, and they taught two classes each. The principal taught grade six and seven. The grade seven students sat on one side and grade six on the other side in the same room. He taught us for the first hour, and then the grade sixes for the second. But I stayed at this school, and in 2012 things improved, with more teachers. Finally, I completed grade eight in 2012.

In 2013, I was selected to attend the Onerungka High School. The school was located a few kilometres away from home and I used to study in the evenings in a classroom. During that year I faced a lot of challenges, the most serious of which was that my parents divorced. My mother went back to her village while my father got a new wife. I tried to focus on my studies, and in 2014 completed my grade ten.

In 2015, I was selected into two national high schools: Aiyura in Kainantu and Passam in East Sepik. My relatives didn’t want me to go to Passam because of the history of fights between students from coastal areas and those from the Highlands. So I went to Aiyura National High School, where I was a boarder. It was a difficult time for me because the grade twelves were bullying the grade eleven students. But, though I encountered many problems, I persevered and completed grades eleven and twelve.

At first I wanted to become an engineer, but then I got interested in business. I applied to the University of Papua New Guinea (UPNG) and was accepted into the Business Management and Foundation Year program. At the end of the foundation year, I applied to do economics. I find that economics is very interesting and I am enjoying the course.

Looking back, my education journey was certainly very difficult. I have faced a range of problems from school closures to overcrowding to bullying. But the constant has been financial difficulties. It has always been difficult to find the money to pay my school fees, and to buy the basics such as stationery, clothes, and soap. I couldn’t have made it without the support of my family. My aunt’s husband (the teacher) has helped me throughout with financial and other support. And every Christmas, I go back home to Kainantu and work in a bakery run by my cousin to raise funds for the next year.

I’m now going into my final year at UPNG. I’m determined to succeed, and to make a difference for my family and my country. When I get employed, I am going to raise the funds and venture into business to create job opportunities for my relatives as well as the citizens of my country to help in one way or the other reduce the unemployment rate, help develop my country, and get rich.

This post is the second in a six-part series of personal reflections written by ANU-UPNG Summer School scholarship students. You can find the full series here.

Deli Jeffery is studying Economics at the University of Papua New Guinea. He was one of ten students selected for the 2020 ANU-UPNG Summer School program.