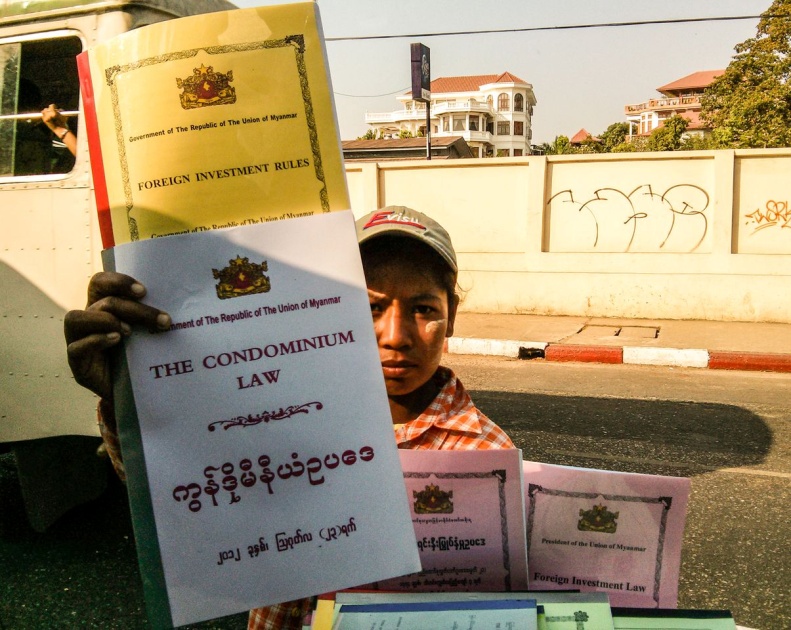 Change is happening so fast in Myanmar that one of the best ways to keep up to date on legislative changes and policy implementation is literally in the middle of a busy Yangon road. The photo I took through the window of my car shows a street vendor, one of many plying their trade among Yangon’s traffic, selling copies of the new foreign investment law, foreign investment rules, condominium law and many others. Instead of buying threaded jasmine flowers to make your car smell nice, why not grab a copy of the legislation, open up to multinational activity and build a condominium at the same time?

Myanmar certainly is a happening place. I had the good fortune to visit the country for the first time last month as part of an ANU mission to investigate the potential for research collaboration and capacity building activities to support economic reform in the country. The Crawford School of Public Policy at the ANU is currently in the process of establishing the Myanmar Graduate Development Program, which is expected to place around five to ten young professionals from Myanmar each year for graduate training at the ANU in public policy issues over a period of one to four years.

Myanmar was the flavour of the month in Australia during March, with President Thein Sein visiting the country, the Australian Government announcing details on the elevated Australian Aid Program to Myanmar (set to double to $100 million per year by 2015) and the Myanmar Update conference held from March 15 to 16 at the ANU.

Decades of isolation have led to multidimensional problems with the Myanmar economy and its management. The task ahead for the country is daunting yet the government has surprised many by containing inflation from levels over 30% in recent years, reforming its notorious multiple exchange rate system, which saw the official value for the kyat around 100 times greater than the black market rate, and passing legislation to allow 100% ownership of domestic companies by foreign investors (yet to be determined restrictions are likely to apply).

Further economic management challenges for the government include the independence of the central bank, taxation and public expenditure reform and promoting development in rural areas, where most of the country’s 15 million people living in poverty are located. The government is also keen to adhere to the Extractive Industries Transparency Initiative standard, which will be an important step given the size of the minerals sector and Myanmar’s reported problems with corruption.

Traveling in Myanmar I got to see first-hand the effects of isolation from international competition, new technology and international best practice in economic governance. In Yangon, ATMs as well as foreign exchange services in hotels have just been introduced, yet the cost of a sim card is reportedly more expensive than the cost of a standard mobile phone and electricity generators are common obstacles on street sides. Mobile phone penetration in Myanmar is around 3%, the second lowest in the world behind North Korea, and only around 25% of the population have access to electricity when it is available.

The toll road from Yangon to Naypyitaw, the new capital that was built around six years ago, goes through the aptly named Dry Zone. The long and expensive looking concrete road, which for some reason duplicates the old main road, is in stark contrast to the villages passed along the way. I managed to visit one of these villages, which only had access to the road via a sandy path and a few planks of wood over a large ditch. The villagers were a clear example of the rural poor in Myanmar; all their houses were made from bush materials and there was little evidence of market gardens or livestock except for scrawny chickens and the odd pig. My guide explained that most of the villagers were agriculturally landless and worked in the rice fields when they could, though there was little work to be found during the dry season. On a positive note, most primary school aged students attended school, which was only 30 minutes’ walk from the village, and there was a health clinic about an hour’s walk away.

Naypyitaw itself is a city of apparently nearly a million people, although this is not obvious, and it is spread over a vast area. The city’s golf courses, water fountains and manicured lawns, that are seemingly watered 24/7, seem at complete odds with conditions in neighbouring villages. The city has a trademark of vast open suburban roads that few seem to use. For example, the road to Pyidaungsu Hluttaw (Myanmar’s parliament) is 20 lanes wide with barely a car on it and seems more suitable as a runway for an Airbus A380. Myanmar’s parliament is housed in an enormous 31 building complex with a reported cost estimate (see here) of $4 to $5 billion. Of course it is only this year that the Myanmar Government has publically released its national budget and so the full cost of building Naypyitaw and its extravagant features is not known.

It was a privilege to visit Myanmar as it takes a giant leap forward, at least for now. Many people there and around the world wait with bated breath to see what happens in the run up to, and what emerges from, the general elections set for 2015.