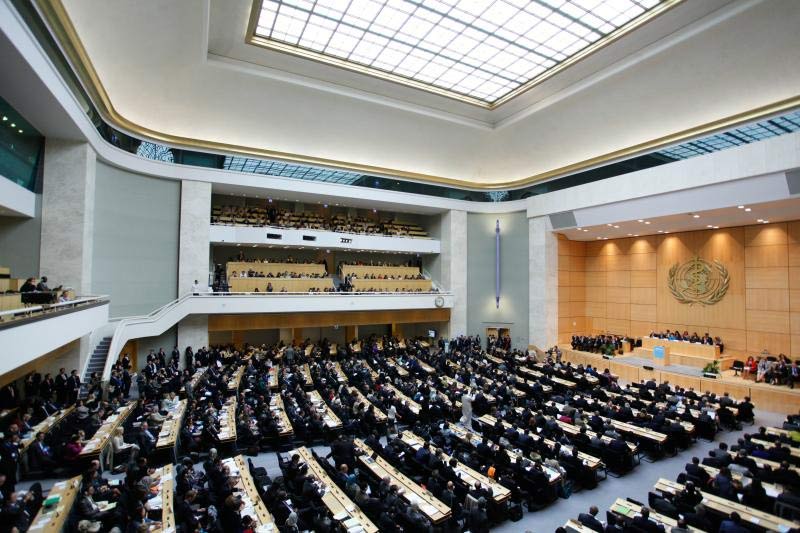 From May 20 to 28 the World Health Assembly (WHA), the WHO’s decision-making body, convened in Geneva. The WHA, held annually, is a major event on the international public health and development calendar, and this year was no different.

A significant outcome of this year’s assembly was the endorsement of major policy documents relating to non-communicable diseases (NCDs) – the culmination of several years of high level lobbying and negotiations. The two most significant documents were the ‘Action plan for the prevention and control of noncommunicable diseases 2013–2020’, and the ‘Comprehensive global monitoring framework and targets for the prevention and control of noncommunicable diseases’. NCDs were also prominent elsewhere – a report on ‘Health in the Post 2015 Development Agenda’ noted the importance of the inclusion of NCDs in a post 2015 framework, and other documents indirectly or partially dealt with NCDs, including draft action plans addressing blindness prevention and mental health, and reports on disability and the social determinants of health.

The development of the action plan and monitoring framework follows another important milestone, the convening in 2011 by the UN General Assembly of a High Level Meeting (HLM) which brought world leaders together to build awareness and consensus, and culminated in the adoption of a political declaration.

The action plan’s ambitious vision is ‘A world free of the avoidable burden of NCDs’, and consists of the following objectives:

The evidence now shows unequivocally that accelerated commitment is needed. The Global Burden of Disease Study 2010 (GBD 2010) released a few months ago provides authoritative data about the global prevalence of NCDs. Globally, NCDs account for 65.5% of all deaths, and 54% of disability adjusted life years (DALYs). Figure 1 demonstrates the deaths and DALYs attributable to NCDs (particularly heart disease and stroke) and their risk factors (particularly smoking and high blood pressure) globally.

Figure 1: The ten leading diseases and injuries and the ten leading risk factors based on percentage of global deaths and DALYs, 2010. 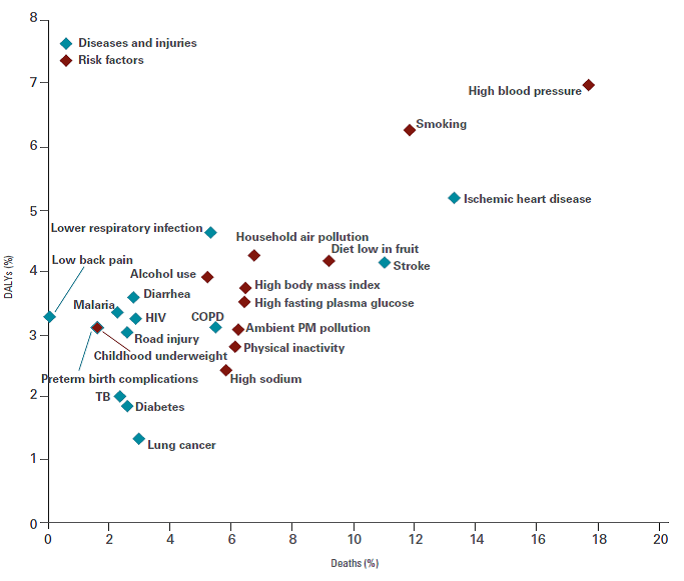 The situation is particularly serious in the Pacific. For the 12 countries where data is available, NCDs cause around 70% of all deaths. A recent World Bank report highlighted the substantial economic impact of NCDs in the Pacific, arguing that primary and secondary prevention is vital if governments are to deal with NCDs in already strained fiscal environments.

International public health and development stakeholders are starting to come to terms with the impact of the NCDs epidemic, and what can be done about it. Despite their impact, NCDs are still often dramatically under-funded, particularly in developing countries. Analysis of AusAID’s funding for NCDs prevention and control highlights this trend. While AusAID has shown leadership in some respects, in others the response has been slow at best. Positives include:

Yet, major gaps remain, as the 2013-14 Federal Aid Budget underscores. The aid budget ‘Blue Book’ recognises that NCDs are the ‘biggest health challenge’ in Tonga, Samoa and Nauru and, helpfully, there is funding allocated for treatment of diabetic retinopathy among children in Pakistan and for the Pacific Eye Institute in Fiji. Yet Australia’s commitment to addressing NCDs is still almost completely restricted to the Pacific.

This represents a lost opportunity. Take Bangladesh and Cambodia, for example, both among the top ten recipients of Australian aid. In Bangladesh, GBD showed that NCDs now constitute half of the top 20 causes of death, and that smoking is the single biggest cause of death in the country. In Cambodia, ischemic heart disease and stroke are the second and third largest killers. Even in Myanmar, a country whose health system might be expected to be burdened primarily by communicable diseases and maternal and child health, stroke constitutes the second largest single cause of mortality (6.9%), and poor diet and tobacco use (both major drivers of NCDs) are the country’s two largest mortality risk factors. In each of these countries, NCDs barely (if at all) rate a mention in the respective AusAID country strategies. This is replicated across all AusAID priority countries outside of the Pacific, and is a common theme among other donors and in the programs of international NGOs (INGOs).

To be fair, there are several ways in which funding for NCDs prevention and control is indirectly allocated in Australia’s aid program. For instance, programs that strengthen the capacity of health staff and health systems do contribute to enabling developing countries to address NCDs. AusAID also provides funding for Australian NGOs to reduce levels of avoidable blindness (including diabetic retinopathy) through the Avoidable Blindness Initiative, and through the Development for All disability strategy contributes to improving the lives of people who have disability, including disability caused by an NCD.

So, what’s needed now? The HLM generated momentum and awareness, and the new action plan and monitoring framework continue this process and provide a global architecture which can be replicated and adjusted as necessary at country level. For this to happen, and for it to result in a more concerted response, public health stakeholders need to up the ante. Organisations that address NCDs in developed countries need to be more engaged in developing country contexts, including through dialogue with aid donors and through developing partnerships with their developing country counterparts. This will enhance the capacity of all stakeholders to tackle the problem, and elevate NCDs as a priority in a public health and international development agenda which is already full of competing interests.

Public health stakeholders also need to engage with INGOs, with an eye on both establishing partnerships and on fostering an environment in which INGOs are able to start addressing NCDs – in a similar way to the emergence of HIV as an international development priority. Such engagement will assist with the integration of NCD activities (particularly at the level of prevention/behaviour change) into existing programs, and lead to the creation of new programs focused on NCDs. It will be a learning process for all involved, but it’s one that is sorely needed.

It is also widely expected that NCDs will be incorporated into the post 2015 development framework. This will be a substantial step forward, and will help get NCDs onto the policy agenda and generate funding. What’s also needed is a clear narrative – a challenge when working across a series of diseases which at face value perhaps have little in common, and which have interest groups that for a variety of reasons (including personalities and immediate business imperatives), might not be inclined to cooperate. Yet one thing they do clearly have in common is the underlying NCD risk factors – particularly tobacco, alcohol, salt, sugar and a lack of exercise. Another thing they have in common is the need for strong health systems. By focusing on commonalities, and engaging both together and with influential stakeholders at country-level, the international public health community will continue to build upon the progress of WHA 2013.