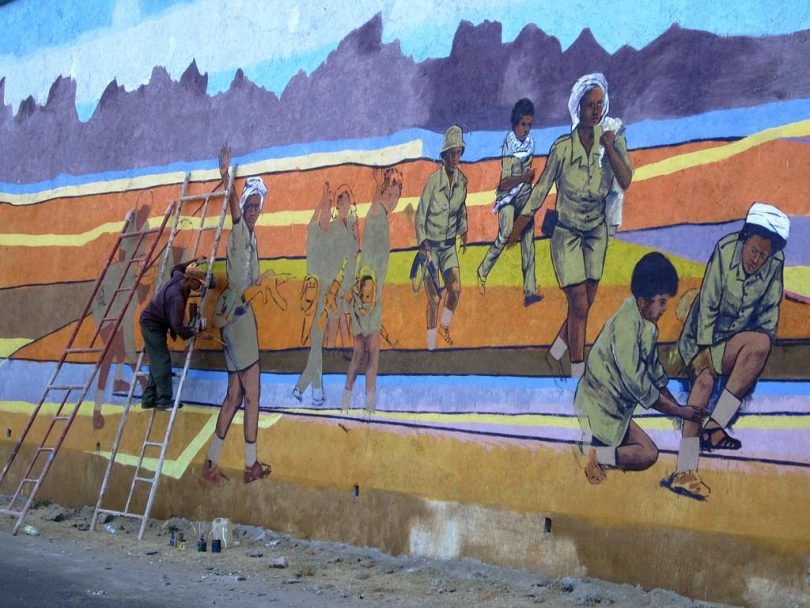 An artist prepares a patriotic mural by the road between Asmara and Keren, Eritrea (David Stanley/Flickr CC BY 2.0)

This post, the second in a three-part series, presents excerpts from a lecture given by Andebrhan Welde Giorgis at the Development Policy Centre in April 2017, entitled “Democracy in Africa: Past, Present and Future”. Read parts 1 and 3, download the full lecture here, or listen to the podcast here.

The struggle for self-determination in Africa was not merely a struggle against colonial rule. It aimed as much for national liberation as for fundamental socioeconomic transformation. It was hoped that decolonisation would usher in a new democratic dispensation that would open the political, economic and cultural space for freedom from oppression, want and marginalisation. Applied in its idealistic construct, the exercise of self-determination as a nation, as a people and as diverse groups could have produced an independent, democratic and developmental State able to empower the people and improve the human condition.

Regrettably, however, this was not to be! Upon accession to independence and seizure of State power, the new national political elites – themselves products of colonial education – merely replicated the colonial state. They entrenched its “highly centralised, authoritarian and self-serving” features. In the words of Frantz Fanon, they were “Black Skin, White Masks”.

Abandoning the early promise of the nationalist project, they sought to extend their hold on power by any means, including the use of force to silence, repress or eliminate any opposition. These features underlie the dismal record of failure of the prototype modern African State to build functional governance structures and viable institutions able to deliver freedom, democracy and prosperity for the great majority of its citizens.

Basically, the debate on the nature of the postcolonial African state and, by implication, its democratic deficit, revolves around the European origin of the inherited State system and its suitability to the socio-cultural reality of African societies. This debate has been characterised by two dominant paradigms. The first paradigm rationalises the relevance of the European State system to Africa. The second paradigm attributes the cause for the crisis of the prototype contemporary African State to its European origin.

However, I see a need for a new paradigm that locates the cause of Africa’s present crisis primarily in the policies and practices of postcolonial African governments. Over 60 years after independence, it is untenable to continue to blame the colonial legacy for Africa’s present predicament. For the basic cause of the failure to deliver lies in the authoritarian, predatory and corrupt nature of the postcolonial State. Acknowledging ownership of the problem is an essential first step to the ownership of the solution.

Here, it would be illustrative to cite the case of my own country, Eritrea, which, despite high hopes that it would learn from the African experience and deliver where others before it had failed, has also disappointed. A once revolutionary movement in which I invested my youth has, after achieving victory and seizing state power, atrophied and turned authoritarian. As a national liberation movement, we fought for freedom, democracy and prosperity. At the helm of State power, we ended up with oppression, autocracy and poverty, producing one of the highest rates of irregular migration, per capita.