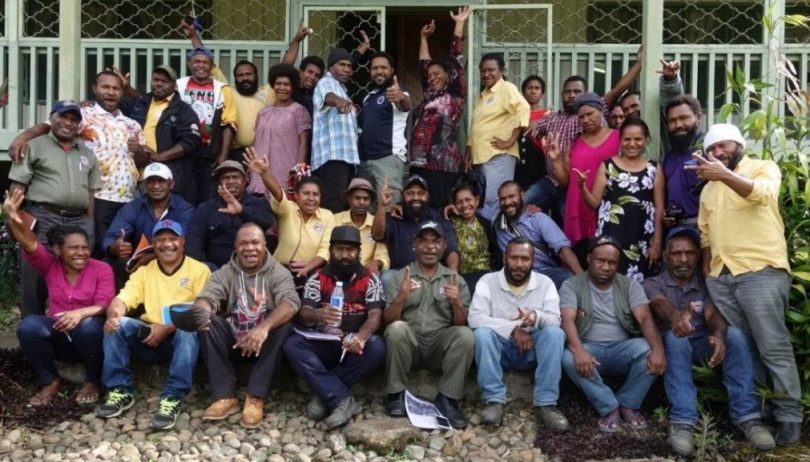 Starting in 2015, CARE International in Papua New Guinea worked with the Department of Provincial and Local Level Government (DPLGA) to substantially revise the government’s bottom-up planning mechanism, based on lessons learned implementing ward development planning in Obura-Wonenara District, Gumine District, and Menyamya District. The result, endorsed by DPLGA in 2016, is a simple community-led planning tool that helps Ward Development Committees (WDCs) to start planning their own development. The tool enables them to articulate what they want to do together, what they can do themselves, and what help they need. The approach is participatory, inclusive, builds local capacity, encourages self-reliance, and promotes social accountability.

The revised (2016) ward development planning process re-imagines a WDC as both a community-based organisation and an arm of government. Every five years ward communities analyse their development situation in terms of seven priority government sectors (education, health, economy, law and justice, disasters, community development, and transport infrastructure). Ward communities can include other sectors (or “missions”) that are locally relevant if they choose. Ward communities then prioritise what they can do themselves to achieve each of the sectors (called “road A”) and what outside help they might need to achieve each of the sectors (“road B”). The top priorities in each sector are then scored again using the following categories; amount of people in the ward who will benefit, benefit to women/girls, benefit to youth, use of local assets and resources, benefit to the environment, chance of being sustained, benefit to other wards. The highest scoring top priorities for road A and road B are then included in the ward profile, which feeds up into the government’s bottom-up planning mechanism.

The overarching message in the revised ward planning approach is that the district and/or its partners will do their best to assist with road B priorities, provided the WDC tries its best to coordinate or implement the ward’s own road A priorities. The better the WDC is at leading their own development, and the more evidence they accumulate to show they can do it, then the more attractive they become to external organisations able to help with road B priorities. WDCs can also market their ward profiles directly to the District Development Authority, civil society organisations, resource industries, companies, and extension agencies. The 2016 version of the new Ward Development Planning handbook can be downloaded here.

Although DPLGA has not yet had the opportunity to roll out their revised (2016) ward development planning approach, the simple community-led planning tool, at its heart, has been further developed by CARE International in PNG and the Australian Centre for International Agricultural Research (ACIAR) as a tool to help any community group, not just WDCs, lead their own development. Community groups identify and confirm their missions, they identify priorities to achieve the missions that they can implement themselves (road A), and they identify priorities to achieve their missions that will need outside help (road B). This information is then included in a simple organisation profile which they can use to market themselves (if they need outside support) to districts, companies, resource industries, extension agencies, and civil society organisations. This link shows an example of an organisation profile developed by a farmer group in Metuyufa Village, Ward 2, Goroka District.

The series of organisational strengthening training is being used by a number of organisations in PNG, including the Fresh Produce Development Agency, CARE International in PNG, Ok Tedi Development Foundation, and the Coffee Industry Corporation. They have used these training materials to build the capacity of family-based and larger small and medium enterprises, church groups, community school boards, cooperatives, associations, women’s groups, youth groups, and incorporated land groups. Below is a selection of representative comments from officers trained to use the materials.

“One of the world’s best bottom-up approaches for community building. To prepare community to be self-governing and group strengthening in PNG” (Coffee Industry Corporation officer)

These same organisations have also built the capacity of their Community Development Workers (CDWs) by using competency-based training that targets the PNG National Standard for CDWs, to give their CDWs a professional identity, and the common minimum skills and knowledge to work in ways that are community-led, participatory, inclusive, encourage self-reliance, and build local capacity. The CDW training materials can be downloaded here. For more information on the PNG National Standard for Community Development Workers please visit its website or the National Apprenticeship and Trade Testing Board.

Debbie Kapal is a trainer and community educator helping women and youth groups in the PNG highlands. Debbie is also working with Fresh Produce Development Agency to help build the capacity of farmer groups.

Charles Iha is a Senior Programme Officer with the Global Green Growth Institute (GGGI). He is also an independent auditor to the international Sustainable Agriculture Certification Standards of the Rainforest Alliance. Charles is a member of the Industry Technical Committee that oversees the PNG National Standard for Community Development Workers.

Priscilla Pius is a member of the Industry Technical Panel for the National Standard for Community Development Workers, and was previously Project Manager at CARE International in PNG.